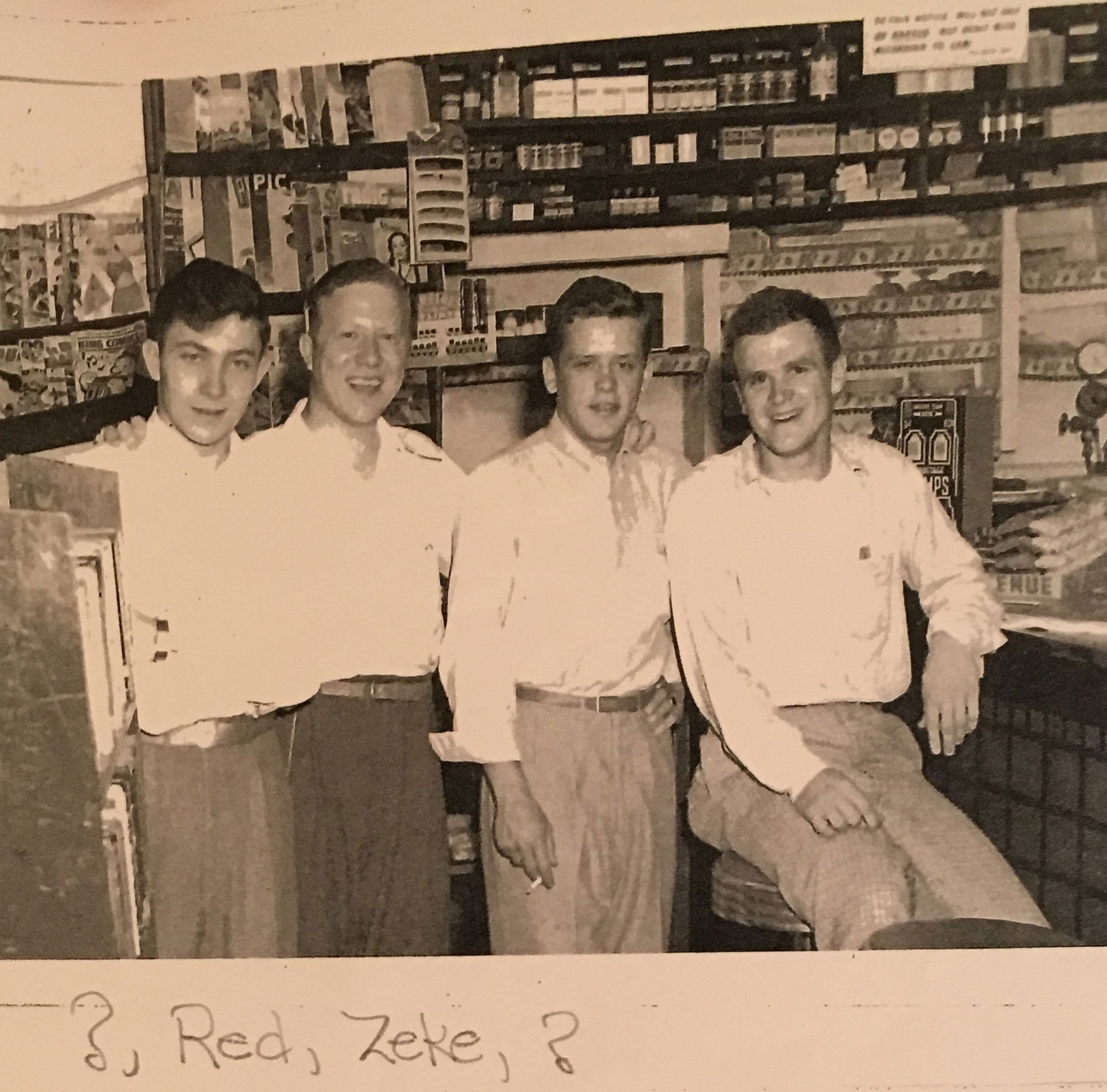 Linda Wetzel shared this photo of her father, Robert A. "Red" Deitz, at the Cherry Top ice cream shop with some of the young men who frequented it. Red is second from left; someone named Zeke is holding a cigarette second from right; and the other two men are unknown. Red owned and operated the store for more than 25 years.
Posted by Joan ConcilioJuly 7, 2019 Local memories, York City/SuburbanNo Comments

Memories of the Cherry Top

Almost exactly a year ago, I shared a question from a reader who gave their name as W. Gross, wondering if anyone remembered the Cherry Top ice cream shop. A couple of weeks later, I shared several notes on that shop, which was located at 1001 S. Queen St. (the southeast corner of Springdale Road and South Queen).

Since that time, I received a few more letters on the Cherry Top, including those from family members of former owners, and that’s what I want to share today. (It’s ice cream weather, so it’s a good time to talk about it, right?)

First, I’d like to share a note from Linda Wetzel of Manchester Township. Linda wrote, “My father, Robert A. ‘Red’ Deitz, owned and operated the Cherry Top ice cream shop for over 25 years. It was open seven days a week.”

She went on to describe, “It was a popular spot for young people in the area. Neighborhood paperboys had their papers dropped off on the porch there, to sort and get ready to deliver. They were regular customers. There also was a Cherry Top softball team for a while.”

Linda continued, “His old-fashioned pinball machine was a draw. It was a real treat for my sister and I to spend an afternoon there while Dad was working.”

Linda included two photos – one of her dad inside the store, and another of him with some of the young men who frequented it. “Can’t find a photo of the outside,” she wrote.

Red passed away in 1994; his obituary notes that, in addition to his time at the Cherry Top, he was a noted dancer with some of the Big Bands of his day and was active in the restoration of York’s Quaker Meeting House.

While searching the archives of YDR predecessor The Gazette and Daily to try to find out more about Red, I was able to read a little more about the business as well; it looks like Red took over the Cherry Top from a Maurice Shue.

As you can tell from the photos, Red’s time at the Cherry Top would have spanned the 1930s to the 1950s. I also heard from two people whose family story picks up after that!

Reader John Strayer wrote, “My grandparents owned and operated Cherry Top for a number of years… It was a coffee and ice cream shop. My grandmother would fry hamburgs for customers in a small frying pan. They sold comic books, toys, etc. It was a small place, two or three booths. Maybe five or six barstools. It was a neighborhood place where folks would gather and chat; nurses from York Hospital would stop in before and after work.”

He noted, “My grandparents were James and Anna Topper. When they weren’t there, ‘Red’ Deitz was there. When they sold the property, it was turned into a beauty shop.”

I also heard from Wendy Gibbs, who was writing on behalf of her mother, Jane (Strayer) Rodgers of Dover – who appears to be either John’s sister or cousin; I couldn’t tell which from their letters.

At any rate, Jane recalled, “My grandparents, Anna and James Topper, owned the Cherry Top for a number of years. I do not know the exact dates but it was in the late ’40s to the mid to late ’50s. My grandfather worked there for a short time for a man named ‘Red’ Deitz before he purchased the building it was in and started running it himself. It was very small and if I remember correctly, there were only two booths and a small counter.”

Jane and Wendy also shared a photo with me taken in the Cherry Top. It was of her grandparents, Anna and James Topper, and it was taken by Jim Hayman on Oct. 27, 1947. You can see that here today!

Finally, I had a note from Larry Reiber, who wrote, “As for the Cherry Top, I had my very first cherry Coke there in the late ’50s. The ‘soda jerk’ just gave the Coke a dash of cherry syrup and wow. I guess I should have approached Coke or Pepsi back then on the idea. They can’t keep it on the shelves today.”

I greatly appreciate those who’ve been kind enough to share their Cherry Top memories!