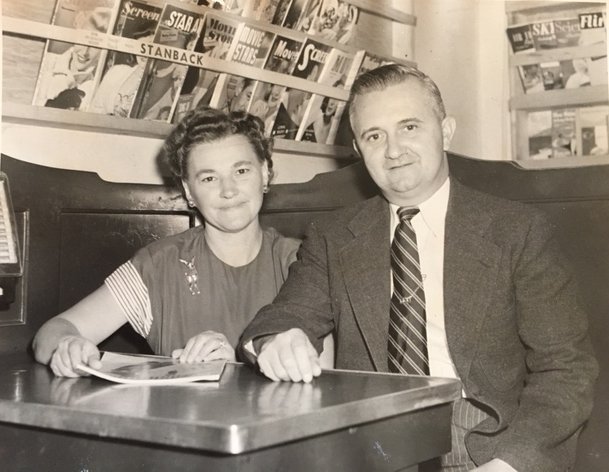 Last July, I shared a column in which several readers shared memories of the Cherry Top ice cream shop, which was located at 1001 S. Queen St. (the southeast corner of Springdale Road and South Queen).

I’ve since received a couple more letters on that shop (and related memories), and I thought the hottest days of summer made for a nice time to share ice-cream memories!

Last fall, I received a letter from Lois Wood, a former Yorker now living in Burley, Idaho. Lois wrote, “My youth was spent on Springdale Avenue, the last house before Edgar Street, and we walked to and from school four times a day, so saw the Cherry Top often. Our parents frowned upon our patronizing it regularly because the pinball machine just inside the door was considered a bit sinful.”

She continued, “As for favorite memory – my grandfather lived in the 900 block of Pine Street and I spent a lot of time there, as my parents both worked. One summer evening, my cousin and I were given nickels by Grampa Bupp, and we walked hand-in-hand to the Cherry Top to buy popsicles. We sat on Grampa’s porch and enjoyed our treats – particularly when we finished them and found FREE printed on the sticks! You can imagine how thrilled we were to return to the shop and get free popsicles! I’m sure there’s no such thing as five-cent popsicles or FREE sticks any more, but it was wonderful at the time!”

She continued, “I remember the booths and the few stools at the lunch counter, as well as the rack behind the candy display. I bought my first comic book from that rack.”

And, Lois concluded, “Having been gone from York for 60 years, I’m sure much has changed but one dear childhood school friend sends paper clippings to me and keeps me ‘up’ on what’s happening there, and I appreciate it.”

Lois added a postscript wondering if the York Daily Record/Sunday News is the paper that was once The Gazette and Daily, which she noted that her stepfather retired from as a linotypist years ago. Yes, Lois, that’s the case!

I also, more recently, heard from frequent writer Virginia Lease. Virginia said she haS been looking for things to do during her staying-at-home time, so she has been going through old issues of the Sunday News. She also came upon the July 2019 column about the Cherry Top, which included the photo you see here today.

“The woman looked so familiar,” Virginia wrote. She asked, “Is this the Mrs. Topper who sang on the choir of First E.U.B. Church on the corner of Philadelphia and Newberry steets? Mrs. Jim Hayman sang on that choir too. Several people who were not church members came to First E.U.B. to sing on director Bill Messerly’s choir.”

She continued, “Bill was the father of your friend Fred,” referring to another frequent reader, the wonderful Fred Messerly!

Virginia was 93 at the time of her letter earlier this year, and said that at her age, “not too many people have the same memories as I.”

Virginia wrote a note on another topic as well, which I also want to share today. It’s not just the Sunday News she has been catching up on during quarantine; she also has been reading old issues of Birds and Blooms magazine, which our family also enjoys. She wrote, “I was so excited when I spotted an article about a chinquapin tree. It brought back memories of Dad’s coming home from Central Market with a bag of chinquapins. We loved them.”

She wrote, “My questions: Is this a tree more suitable for the South? Are there any trees left in Pennsylvania? I think these small trees grew in the woods of southern York County – wild, not cultivated.”

Virginia, yes, the chinquapin, or dwarf chestnut, is considered mostly a southeastern U.S. tree. We are at the very far north end of their native range – described as going from Maryland and extreme southern New Jersey and southeast Pennsylvania south to central Florida, west to eastern Texas, and north to southern Missouri and Kentucky. There’s a town named Chinquapin in Bucks County, and their historical society’s guide to place names states that the tree is only native in Pennsylvania in York, Lancaster, Adams, Franklin, Cumberland and Chester counties.