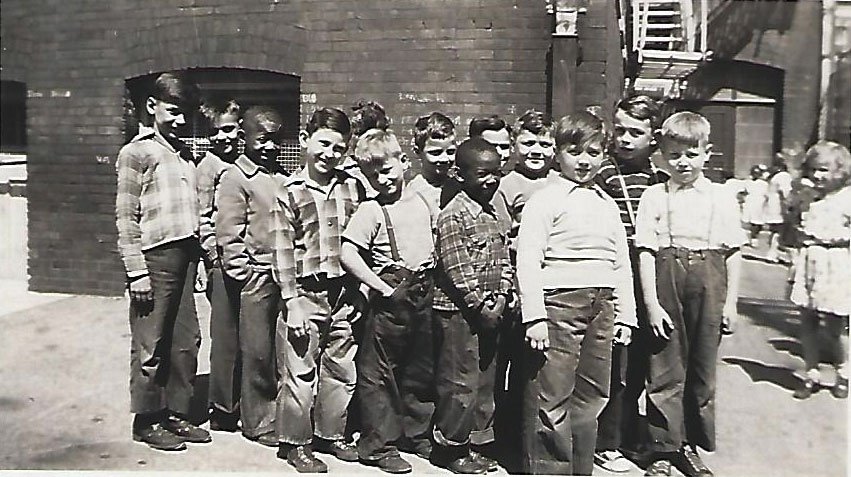 Carole Kuhns Bradfield shared this photo of the second-grade boys of Central Elementary School on West King Street in York, taken in 1948. The photo represents something we've seen depicted in several other photos of York County's small schools from the first half of the 20th century: They were integrated well before the Brown vs. Board of Education decision of 1954 mandated public schools to be.
Posted by Joan ConcilioOctober 24, 2019November 12, 2019 Ask Joan, Dover/West York, York City/Suburban1 Comment

A fun tidbit today: The number of people who get to my Only in York County website when they are actually searching for “Ask Joanna Gaines” of the Fixer Upper TV show – it’s more than you’d think.

Trust me, you do not want my advice on fixing up your house. York County memories, questions and food are all I have for you. But I hope you’ll enjoy some of those today, no demolition required.

Earlier this year, I heard from Carole Kuhns Bradfield, who writes frequently (even though I am often slow to share and respond to her great information).

Unfortunately, this is just such a “too-late” item, because in a quick skim I missed the date-sensitive part, and I’m very sorry.

Carole had written to me about Central Elementary School at 32 W. King St. in York, which closed in the late 1950s.

“Since that time, former students, teachers, PTA members and others have been getting together yearly for a reunion,” she wrote. “After all these years, our numbers have dwindled. We are now down to only one teacher and one PTA member attending; we have several former students attending who are in their 90s. So it was with sadness that we decided this year, our 60th reunion, would be our final one.”

Unfortunately, that event was held back in April; however, I’d love to share today some photos Carole sent of Central, and to invite other readers to share their memories so that we have something of a “virtual reunion” for this former city school.

This next question comes from Bob Moffitt Jr., who is a lifelong resident of York County, having lived in several different towns.

“I am inquiring to see if you remember and/or know a few things that I have often wanted to know about,” he began. “For example, the old West Manchester Mall…”

He wrote, “Was Walmart always a part of it, or was there a time when that mall had no Walmart? What stores and shops were in York County before all of these ‘superstores’ like Walmart, Target, BJ’s, Sam’s Club, etc…? It has changed so much in my 38 years here. And I would like to hear about and see pictures of what it once looked like during my younger years (when I took for granted that the old stores and shops would always be here) as well as before my time if possible?”

Bob, it sounds like we are contemporaries – almost 37 years here for me! – and I also wish I had photos of the things I assumed would last well into my adulthood and beyond. I wonder if the era of social media will make it easier to find those things in the future?

At any rate, yes, the West Manchester Mall, opened in 1981, existed for a good bit before Walmart.

At the time, the Allentown-based Hess’s department store anchored the end where Walmart is now. That chain closed for good in 1994, though I don’t have an exact year when the West Manchester Mall one did. (My sister Linda Smith may remember this, as she worked at Hess’s when I was young!)

When the Walmart was originally built there, it had an entrance into the mall, but when construction started in 2003 to make it a Super Walmart with groceries, that was closed off. The inside of the mall had all this brown tile with sunken seating areas and fountains, and I have been trying to find a photo of that for more than a decade now.

The other end anchor was at first Gee Bee, a chain later bought by Value City in 1992.

And if you’re interested in old department stores in general, I would highly suggest getting lost in The Department Store Museum website at thedepartmentstoremuseum.org. That’s one place I went looking for Hess’s info and I dived into a rabbit hole of chains I remember, which was fun.

(Fun side note the first: Hess’s had an extra S tacked on to its name, not in keeping with grammar conventions – though I found out this week that the Associated Press, whose style is used at the York Daily Record/Sunday News and most other news outlets across the country, is considering adding the ‘s back for the possessives of nouns ending in Z or S. So, Agnes’ book would become Agnes’s book. The comments were… heated. Copy editors are renowned for their style-point debates and this is no exception.)

(Fun side note the second: The very first Walmart in Pennsylvania was actually the other one in the York suburbs; it opened in the former York Mall on East Market Street in 1989, Jim McClure wrote in a 2007 column. So we definitely have a history of “big box” stores!)

This is a topic I could write about for hours, not the least of which is because it’s one I personally was able to experience! While I love hearing about things from the ’70s, ’60s, ’50s and earlier, there’s something fun about being able to say “Yes, I remember that too!”