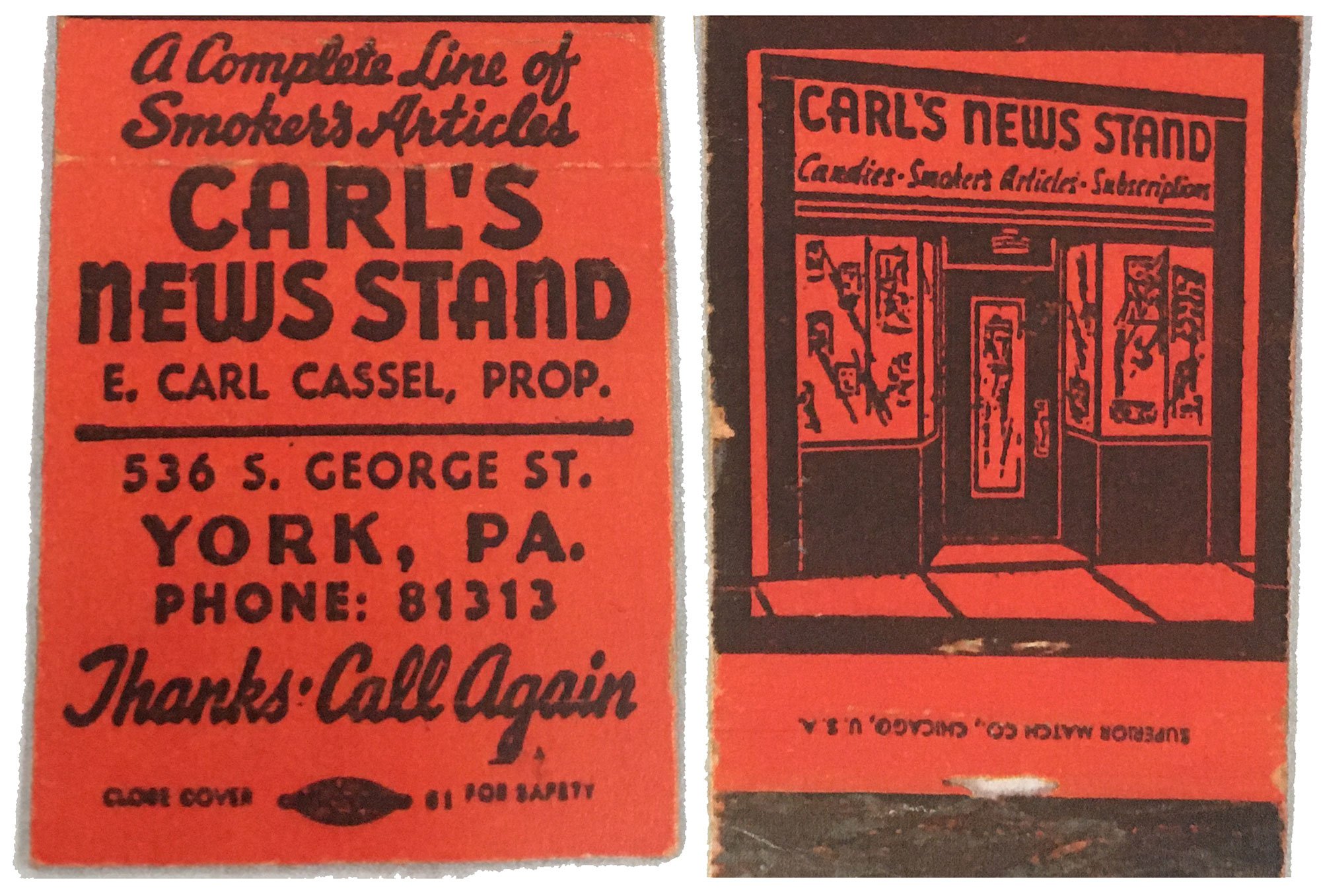 More on newsstands (and a local musician) from John N. Fishel

I promised last week, when I shared reader John N. Fishel‘s memories of Mort’s Newsstand, that I would also share his memories of another well-known former local newsstand, Carl’s, this week.

John remembered Carl’s in the 1960s and later at the address seen on the matchbook that appears with today’s column – 536 S. George St., on the west side of South George between Maple Street and Boundary Avenue. That’s also the address that appeared in an ad in York Hi-Lites in 1968, which John shared with me and which was published with last week’s column.

This shows the earlier address of Carl’s, which was given as 41 E. Market St. John notes that this would be where the parking garage is now located across from the old courthouse.

Regarding Carl’s (at its later location), John recalled, “I can still recall seeing Carl in the afternoons bringing newspapers out to people on their way home from work to their cars parked at the curb (or double-parked if the curb was full). I presume that these were regulars who stopped there every day and probably gave Carl a nice tip for the extra personal service.”

He recalled another as well: “There was also a newsstand in the first block of West Philadelphia Street in the 1960s and 1970s (perhaps it was there earlier as well) named Jones’ Newsstand. It was at 30 W. Philadelphia St., on the south side just east of the market house in the side of the Strand-Capitol building.”

Of that business, John wrote, “After a change of ownership in the mid-1970s, it became known as Dottie’s Newsstand. Dottie’s moved around 198s a half-block east (and across the street) to the northwest corner of North George and West Philadelphia, and lasted there for a decade or more. If I recall correctly, the name was again changed to Smart Newsstand somewhere along the way, as I presume another change in ownership resulted in people by the name of Smart owning it.”

John mentioned that when he worked in the circulation department of The York Dispatch in the 1980s, he worked with Luther Jones, the son of the family that owned Jones’ Newsstand. He said that Luther and his wife passed away in a fire almost 20 years ago, but added, “If Luther was still around, he could fill us in on many details of the owners of York newsstands as he took an intense interest in people and seemed to know just about everybody.”

On another topic altogether, John has a question I am hoping some readers can help with. He’s looking for information on a local musician named Phil Stinger. “He was pretty well known around York as he played drums with a local jazz group known as The Gaslight Trio in the 1960s (maybe earlier too?)” John wrote.

John knew Phil because Phil was the stepfather of John’s childhood best friend while growing up in Jacobus, Bryan Bucy. Phil married Bryan’s mother, Sally, in 1967 or 1968, John recalled, before passing away in 1969. Sally has since passed away as well, and Bryan moved away not long after his stepfather’s death, so John is hoping for some information from local readers about Phil, who he remembered giving drum lessons from the family’s home.

He wrote, “As a kid at the time, I didn’t pay much attention to Phil Stinger’s music career, but now I am curious. I do recall one time around 1967 or 1968 that Sally took Bryan and me (and also my sister as well, I think) to see Phil’s group, The Gaslight Trio, at a free concert at Farquhar Park (it may have been part of a larger celebration there).”

He continued, “I seem to think they probably played Herb Alpert & The Tijuana Brass-style pop jazz, but I can’t be certain as I didn’t know one style of music from another back then. I presume that they also played at local bars and lounges. I am interested in knowing more from any of your readers who remember them.”

In his collection of York High newspapers, John also had a York-High Weekly from May 8, 1942, which included a photo of Stinger, likely then a senior, after he participated in a band meet at Susquehanna University. (I do not quite know for sure what a “band meet” is, but it sounds cool and I’m pretty sure it’s what we would now call District Band.) In the photo, Stinger is pictured next to clarinetist Richard Smith, who also took a first-chair position at the event.

2 comments on “More on newsstands (and a local musician) from John N. Fishel”