Today, I want to share something special – a guest post from an incredibly good friend of mine for the past, I don’t know, 17-ish years? (Wow?!) Her name’ Jennell Moser, and she has always been WAY better and more into history than me.

When I saw a couple weeks ago that she’d been researching the area around her new home, I said, “Hey, you should write about that for my blog!” And she was kind enough to oblige!

Say hi to Jennell, whose post is included here!

I happen to live near one of the longest street names I have ever encountered, Camp Betty Washington Road. Driving this winding road with a name as long as the road itself got me wondering who was Betty Washington and where was this camp.

One night, as I lay in bed, I took to the internet on my smart phone and started looking for answers. Many of the answers I found were found on the Only in York County blog.

As with most history research more questions than answers were found along with tidbits of other information that piqued my interest. So I will start with my initial findings and then continue onto some of the more obscure information I found with hopes others can possibly help fill in the rest.

I really just wanted to know who Betty Washington was, and found the October 16, 2009 blog post “Where did Camp Betty Washington Road get its name”. From this post I found that there was a girl’s camp located on the road in the 1920’s through the 1940’s with pools and a small zoo.

The camp had been severely damaged by the flooding of Mill Creek in 1933, with the animals being safely moved before the flood waters reached them. The road itself was named after George Washington’s younger sister Betty Washington, a relative of Mrs. Lucy Neville (Mitchell) Smith. Mrs. Smith was active in the St. Johns church and had backed the creation of the Girls Friendly Society Camp.  The camp was run by Mr. and Mrs. Heiges. I could not find any pictures of the camp or of those who so lovingly put their all into running the camp.

On my travels in Google-land I came across information on an old cemetery called Moser’s Cemetery located at an S-curve on the South end of Camp Betty Washington.

Since my last name is Moser I was very interested in what happened to this old cemetery but unfortunately there is very little information available. From what I have been able to ascertain the plot was unceremoniously plowed over and the grave markers thrown into the nearby woods in the early twentieth century.

In the early 2000’s the land was then bought by a developer and houses built over the area where the cemetery once laid. Some fight was given, referred to in the township minutes as Mosser’s Cemetery, to have the bodies disinterred before building began but the fight was in vain. The stones were destroyed and unfortunately the names and locations of those who were laid to rest in the Moser Cemetery are forever lost.

Another feature of Camp Betty Washington Road I came across was that of a train line that ran along the road with a station located just after Belle Road heading south. The station was called Ben Roy and was a stop on the Maryland and Pennsylvania Railroad. The station was turned into a house and can still be seen from the road. 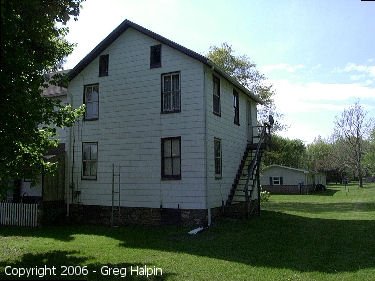 A landslide in 1899 occurred near the old Ben Roy train station causing a large derailment, many of the train cars piled up on one another along the tracks. I have been able to find very little information about the accident other than some photos. It looked like a massive accident and I would have thought there would be a lot more information on something a significant as a train pile up as extensive as this one seems from the photos.

I must say that after finding out what I have about Camp Betty Washington Road I feel a lot more at home and still would love to know more about the area.

I would like to know what the road was called before the 1920s when the name was changed to reflect the Girls Camp. I am also curious as to where the cemetery was exactly, whether the people who live in the area around the old cemetery are aware of its existence before moving in and if there is any record of the names of those who were buried there.

Many thanks to Jennell for this awesome post – and for teaching ME a bunch of stuff I didn’t know about this area! Special shout-out to fellow commenter Greg Halpin for taking the photo Jennell found, and also, a special note to local historian and cemetery-preservation expert Blake Stough of Preserving York, who I think will also have interest in the former Moser’s Cemetery!

2 comments on “The history of Camp Betty Washington Road”