Assorted notes on Bury’s and Playland 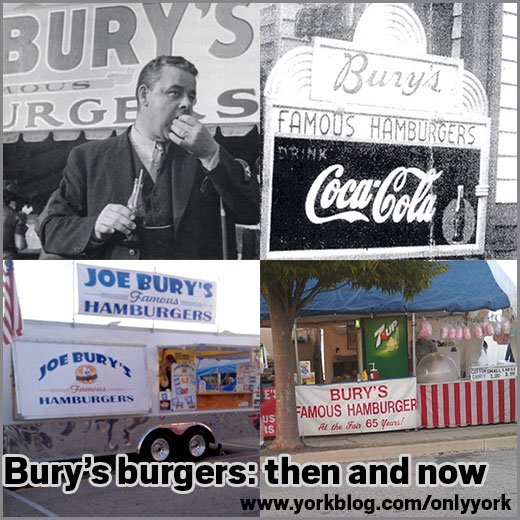 Last week, reader Andrew Diehl asked a question about what was immediately to the right of the Playland skating rink as you looked at it head-on from Market Street.

I’d heard previously from a few people that it might have been Bury’s burgers, but some of us in the local history community were a little confused, because we’d heard of Bury’s being in other slightly different locations in the area.

This is one of the things I love most about what I do: I am surrounded both in-person and digitally with people who have a passion for the things I’m interested in, and who love to work together to find out more about them.

In this case, fellow Yorkblogger Stephen H. Smith of YorksPast took the ball and ran it to the goal line, to use an overdone metaphor appropriate for football season, showing that all of the above is basically true; Bury’s was at many locations in the area of Playland, and he details them complete with years!

Check out his research here: Bury’s in Springettsbury Township was not just hamburgers. (There’s a great street-view photo of Bury’s there, too, that is well worth checking out!)

Since Stephen did all the work, that leaves me the fun of sharing some memories readers sent when flooding me with memories of Bury’s, Playland and that area in general, which I am very glad to do, especially now, since, with the York Fair gearing up to start again on Friday, Sept. 5, you’ll soon be able to take your choice of the two modern Bury Burger incarnations!

Sally Wilson commented, “I was very young, but I do think that was Bury’s Famous Hamburgers. My older brother worked there & the building beside that was the bingo hall. My dad actually called bingo there.”

Dennis Fry agreed, “I remember that in the 1950s and 60s there was a Bury Brothers Frozen Custard and a Bury Brothers Restaurant next to the Playland Roller Rink. The York Valley Inn was across the street but I do not remember the airfield. I will be interested to see what others might remember.” (Dennis might be sorry he said that, I’ve got so many memories to share!)

From Steve Flaharty of Dallastown, I heard, “In response to your question about the building beside Playland skating rink, that was Bury’s restaurant. The home of the famous burgers in the secret sauce. This was my first REAL JOB! At the ripe old age of 14, I decided it was time for me to enter the world of the working class. After many long weeks of searching the ‘Help Wanted’ pages of the newspaper, I noticed a request for ‘A Dishwasher Needed’. After seeing this request, I promptly put on my coat and tie and walked to the restaurant with the hopes of fulfilling their request. After filling out the application and as I was talking to the owner, the phone rang. In the background I could hear the person clearly say ‘The Position For Dishwasher Has Been Filled’. After receiving my ‘Working Papers’ (something you had to do in the day), I began my working career as a full fledged dishwasher for the sum of $1.00 per hour! And to think, I bought my first car (a 1964 Ford Fairlane white with red interior) with the money I earned as a top notch dishwasher! The Bury’s were fantastic to work for. Fats, Joe and Sis Bury made me feel like I was a part of their family. I could never thank them enough for giving a 14 year old a chance.” (As someone who got her first job at 14, essentially washing dishes, Steve’s story made me smile!)

From Fred Messerly of Red Lion, who I’ve received memories from before and always enjoy hearing from, I heard, “The building you ask about was a Joe Bury’s Resturant. My partner and I ate there many times before skating. Jim Wells and his wife Nancy picked us up at Bill Penn and we would get a quick burger and go skate.”

Gary “Pappy” Heiland, another longtime reader and commenter, wrote, “The building you were asked about was Bury’s Restaurant in the early sixties when I moved my family to Yorklyn. We would often go there on Sundays after church. At the time Bury’s either owned or leased to two smaller buildings between the restaurant and Playland. In the mid to late fifties I worked for Green’s Dairy in West York and one of my jobs was to deliver Bury’s Ice Cream to the building closer to Playland. The ice cream was made for Bury’s, probably to their own recipes, by Green’s Dairy and packaged in Bury’s containers. I suspect that the buildings were storehouses for the Bury enterprises.”

And Norma Jean Scott-Mitzel writes, “In the ’50s, a large group of Hellam teenagers, including me, went skating every Saturday night at Playland. We depended on parents to drive us there and pick us up afterwards. After the sessions we would go next door to Joe Bury’s, get a bite to eat and wait for our rides. The answer to your question is: Joe Bury’s Restaurant, home of the famous Joe Bury Hamburger.”

Jack Craig added a bit more insight into the area; he said, “I lived behind Playland in the 60s. The airport was gone, it was Valley Canvas then. The building to the far east was Bury’s Diner. The one in between became a hobby shop where they had large tracks for slot cars and racing.”

Another fun note came from Dick Forscht. He noted, “I know one of the two buildings shown in the photo of Aug. 24 Sunday News was Joe Bury’s Restaurant. I know that, because my friend, Jack Angelo, and I went there the night before I was married in 1955. Some bachelor party, huh?” (Hey, Dick, I like it – FOOD trumps any other fun any day for me, and I bet your wife was happy too!)

Probably my favorite note came in the mail from a reader who didn’t sign his or her name with a story that made me smile. This reader wrote, “The building to the right side of Playland skating rink as you looked at it head-on from East Market St. was a restaurant – I remember it very well – I think the name of it was Bury’s. 57 years ago, when I was 13 years of age, my parents would take me to Playland every Saturday to skate. Playland opened at 12:00 pm and closed at 5:00 pm – then reopened for the evening session from 7:00 pm until 11:00 pm – so, every Saturday I was in that darn restaurant for 2 hours to eat and wait for the skating rink to open again at 7:00 pm and skate again until 11:00! Didn’t realize it at the time, but now it’s kind of funny – I guess my parents had their privacy on Saturday, but boy were my little legs tired!”

Charlie Abel recalled another restaurant in the general area; he wrote, “Could this have been MELVIN’S? I’m 85 but remember taking my girlfriend to MELVIN’S for soft ice cream and milk shakes in the early 1940s, in a 1936 Ford.” That was definitely an East York-area hot spot, also on East Market Street, but after some fairly intense debate, back in 2011 we pretty clearly located it where the I-83 overpass over East Market is now, which was a bit closer into town than the Playland area. But it was definitely another fun place to spend the day with a date or friends!

And Al Bitzer wrote me a letter about another part of the area included in last week’s photo: the former airport!

Al writes, “In 1953 I was hired by Caterpillar Tractor Co. in their plant engineering dept. The aerial photo… sheds light on a number of things. My son tells me that the building at the bottom left was Bury’s Restaurant. I find the airport north of Market Street (and south of the railroad) to be of interest. Early plans for Caterpillar called for the water tower to be on the south side of their property near the railroad. Due to the proximity to an airfield, the FAA (Federal Aviation Authority) denied that location. The tower was moved north to its present spot. Subsequently the airfield ceased operations! I recall when North Hills Road went under the railroad tracks. It was one lane both ways and a creek was on its east side. A sign of the RR abutments are still visible. An aside: The railroad had passenger stops with one being Rockburn Station near East York.”

Thank you all for you great memories of these areas of East York!