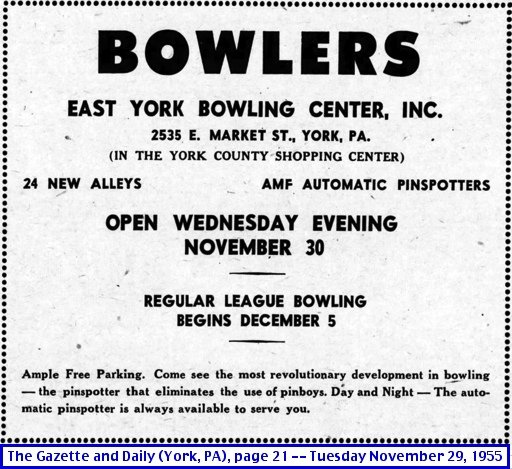 This ad for the opening of the East York Bowling Center came from The Gazette and Daily, Tuesday November 29, 1955, page 21. It came from the newspaper microfilm collection of the York County History Center and was found by Yorkblogger Stephen Smith.
Posted by Joan ConcilioOctober 14, 2018October 22, 2018 Local memories, York City/SuburbanNo Comments

I’ve never been a big organized-sports person. Other than playing varsity tennis in high school – and don’t get too excited about that; I was varsity primarily because there just weren’t many people trying out for our girls’ tennis team, and we were terrible – I have almost no experience doing anything semi-athletic with a team.

Bowling, though – I love bowling! I spent a few years in high school bowling on leagues with friends, and it was a great time. (Even if I was just included to help the team handicap, since I have only one game in my life with a score higher than 200.) But it was a ton of fun. I loved the sound of the pins, the taste of the hot dogs, the high fives.

And we’ve talked about bowling here and there in the past in this column, but I don’t believe we’ve ever focused just on that. So today, I thought I’d take a “spare” minute and share some readers’ bowling memories.

In 2016, reader Joann Rudisill asked who remembered the old bowling alleys of York. “There was one that had duck pins in the city and a bowling alley on South Pine Street,” she wrote.

Back at the start of this year, John Jameson of Innovative Bowling Products/Vise wrote with details about some former bowling alleys. The one Joann mentioned on South Pine Street was 20th Century Lanes, he said, and that became the predecessor of today’s Colony Park Lanes North, where I grew up bowling. John also mentioned that his grandfather had co-owned the former White Rose Lanes, and that his own first job was as a pin chaser at Colony Park.

A reader named Cheryl recalled an alley outside of the city. “I remember the bowling alley in Mount Wolf on Main Street,” she wrote. “Not sure when it closed. Think it was run by a man with the last name of Fiddler. Surprised a small town like Mount Wolf had its own bowling alley!”

And she continued, recalling another bowling alley that “was located in the shopping center where Giant is located on East Market St… If memory serves me correctly, you went downstairs to get to the bowling alley.”

That downstairs bowling alley was a HUGE topic of discussion. That was the East York Bowling Center, which we’ve talked about a few times in the past. Reader Terry Huber noted that his father was the mechanic there for 37 years, so he “practically grew up there.” He added that he bowled there regularly until it closed in 1994.

In response to a question from reader Reta Morgan and her husband, who were wondering if the lanes remained when the shopping center was updated, or whether they’re still there, Terry said, “The entrance from the shopping center was closed off and they were using it for storage. The downstairs entrance is still there. I looked in the window… and everything was gutted out. I do not know who owns it or what purpose it serves today.”

Terry’s cousin Carl Huber also wrote, telling me, “East York Bowling Center was established in 1955 at the York County Shopping Center. Owned by Arthur Rhodes Sr., one entered from the top (37 steps down, I remember), or from the back parking lot. Hanging around the shopping center, we could go from top to back cutting through Feller’s men’s store. Artie Rhodes Jr. eventually took over. Dick Alloway, his wife, Eleanor, and June Hyder took care of customers. My uncle Bob Huber maintained the machines, and my dad and I tended the machines at other times. Before I was old enough to do that, though, I would show up around 8:30 on league evenings, collecting trash and emptying ashtrays, as one of the benefits of working was getting bowling at a discount. The rear entrance is still there, with a window. I haven’t looked in for years, but at one time it just looked decrepit.”

Pat Lehman confirmed that. “My husband, Bob Lehman, was there during the demolition of the bowling alley back about 1993,” she wrote. “An electrician, he was working down there and saw that they took out everything, including the wood floors. It was left as a large empty room.”

Another reader, Michael, noted similar, writing, “Not sure what the inside looks like where the alleys would have been, but if you walk around the back of the shopping center, the doors still have bowling stickers on the doors and it looks like the entrance to a bowling alley lobby inside the door… Without looking, I would suspect that the machines for the lanes were sold when the place closed. It would be neat to see what it looks like inside.”

Longtime reader Tom Keasey recalled that there were maybe between 20 and 30 lanes offering open bowling and serving as home to many leagues. “If you were in one of the stores directly above the bowling alley, you could hear balls rolling down the alleys and hitting the pins,” he recalled.

But perhaps the biggest source of information on the former East York Bowling Center is fellow blogger Stephen Smith of Yorkspast, who wrote in detail about the lanes in 2015.

If you check out his post at yorkblog.com/yorkspast/bowling, you can see several photos, including one of the back, ground-level entrance. Stephen noted, “When I did that post two years ago, I was consistently told the whole bowling alley space was gutted and became rental storage space for businesses.”

But, he went on to note, after he wrote that post, “At the New Eastern Market, I ran into a long-ago fellow member of a company bowling league; he had heard a slightly different story … i.e., not all of the former East York Bowling Center was gutted; some parts can still be seen in the storage space(s). So far, I’ve seen trucks parked near the entrance on two occasions and knocked on the door, however, no one answered.” He did promise that if he ever gets a tour, he’ll be sure to post photos on Yorkspast!