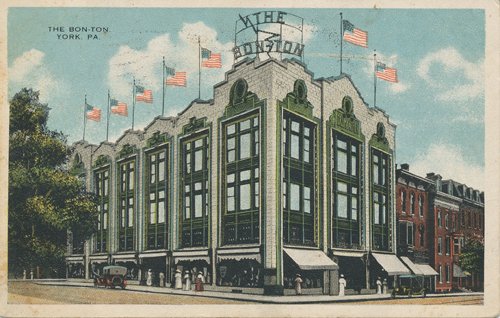 This postcard is of The Bon-Ton's former location in downtown York. It's a "Commercialchrome" card published by Fair & Square Bargain House of York, PA. It was mailed by Lucy Snyder of East King Street, York, to Freda Hatt of Annville, Ohio, with a postmark date of Oct. 18, 1917. Postage cost? One cent.
Posted by Joan ConcilioApril 22, 2018May 26, 2018 Local memories, York City/Suburban

Memories of The Bon-Ton from a longtime reader

I have to admit, I was disappointed to hear the recent news that The Bon-Ton is liquidating and closing. I have several friends who’ve worked there – one for more than 30 years – who are losing their jobs, and I have received many, many memories about the store throughout my decade writing this column.

Today, I want to share a wonderful letter from longtime reader and commenter Tom Keasey of York Township, who I think sums up the feelings of many about this news.

But first, a short, fun note from reader Richard Sweitzer. He wrote to me earlier this year with a note, “I have discovered some metal address plates in a pouch that has the Bon-Ton name on it. I am thinking that these were charge plates from when The Bon-Ton store was at West Market and Beaver Streets. The plates have my wife’s name on and her address from in the ’60s.”

Richard, that’s too amazing that you have kept those! I’m guessing they will be even more of a collector’s item now.

Then there is Tom and his great memories of The Bon-Ton. Tom began his recent letter, “If you’ve been following media reports you know the closing of The Bon-Ton and their other stores is now a reality. For many Yorkers like myself, another part of York County’s storied history is coming to an end; in fact, as I am writing this, the ‘going-out-of-business sale’ has started and the stores are expected to close by Labor Day. What a shame! But, I wouldn’t be honest if I didn’t accept some of the blame. Neither I or my late wife could drive, so we always needed to rely on others to take us shopping. In later years, it just became easier for me to shop online.”

I have to admit that I do much more of my shopping via the Amazons of the world than I probably should, especially given how strongly I feel about supporting local businesses. I drive and have no good reason not to shop local more often, and Tom’s note really made me stop and reflect.

Tom continued, “The original dry-goods store opened in the late 1800s under the name of S. Grumbacher & Son. Before I share some of my memories, I’d like to ask your readers if anyone can tell me where the name Bon-Ton came from and when was it first used?” (OK, I admit: I don’t know this one! I would love to hear from those who do!)

He added, “Now, for some of my memories of The Bon-Ton. Just after Thanksgiving and up through Christmas I, like many other Yorkers, enjoyed coming downtown to look at the wonderful displays that adorned the windows at The Bon-Ton and York’s other department stores. In my opinion, these festive windows really got you into the holiday season. This would be lost somewhat with the coming of the malls.”

Tom continued, “While the holiday season was special, there were times during the school year when the downtown and stores like The Bon-Ton served as a gathering place for kids, just as the malls would do in future years. I know Bear’s and The Bon-Ton had elevators to go from floor to floor, but besides its quality merchandise and customer service, The Bon-Ton was the first and only store to install at least one escalator. The moving and disappearing steps were fascinating and kids liked to play on it. The Bon-Ton was also known for the wonderful meals that were served in the ‘Tea Room’ located on the Mezzanine level in between the first and second floors. Depending upon the season, day and time, shoppers often had to wait in line to get a seat. And, like the downtown’s 5-and-10s, the ‘Tea Room’ often served as a teenager’s first place of employment.”

Now, this next part is my favorite, because it ties so well to Richard’s memory that I started with.

Tom goes on, “I can still remember going into seventh grade. My parents started to give me a bit more freedom when it came to shopping for my school clothes for the year. In late August of that year and in subsequent years, Dad would give me the ‘charge-plates’ for The Bon Ton, Bear’s and Wiest’s and cash if I wanted to shop at other stores. Yes, I said ‘charge-plates,’ not the charge cards many of us carry today. Back then department stores like The Bon-Ton and others issued their own ‘charge plates,’ which were an actual metal plate that had the account owner’s name stamped into it.”

He continued, “The Bon-Ton, Bear’s and Wiest’s carried moderately priced clothing for both girls and guys. In addition to white, combinations of cranberry, navy blue, khaki and British Racing Green (BRG) were popular colors for shirts and tops. The usual colors of choice for guys’ trousers and girls’ skirts and jumpers were khaki, gray, navy blue, brown and black. Girls’ dresses could be almost anything. Girls’ slacks were rarely seen. The wearing of denim jeans to school was a ‘no-no,’ and at best, doing so got you time in detention and at worst, maybe a few days suspension. My have times changed!”

Tom mentioned some of those other stores as well. He writes, “While my main focus was to be on the demise of The Bon-Ton, I would be remiss if I didn’t recognize the other stores once in the downtown that had previously fallen by the wayside long before The Bon-Ton. Like The Bon-Ton, Weist’s, Bear’s and J.C. Penney carried clothing for every member of the family. Bear’s was especially known for its shoe department; this was a stop I always made to buy a pair of Wejeen penny loafers. (These shoes are still being made and sold under the Bass name.) They also carried Clark’s ‘Desert Boots’ and Jack Purcell sneakers that were popular.”

Tom also noted, “There were several specialty stores that catered to shoppers both male and female, from teenagers on up, to those who needed business attire. Jack’s was a very popular store for women of all ages. Moderately priced menswear stores included Gregory’s Menswear, Walker’s and the Hub Store. When I shopped at Gregory’s, I always tried to have Danny Quickel wait on me; he really knew the store’s inventory and could make suggestions to ensure everything for an outfit was coordinated properly. Gregory’s and the Hub also served as places to rent formal wear for that special occasion. On the higher end, there was Lehmeyer’s and Griffith-Smith. These stores catered more to the businessman; occasionally I’d go into Lehmeyer’s and buy a cranberry and navy blue striped tie or a shirt or two from my eighth-grade history teacher, Howard ‘Barney’ Barnhart, who worked part-tine. You could tell he worked there because he was always ‘dressed to the nines.'”

He also recalled, “For many years, Lehmeyer’s was the only store in York County which sold the famed ‘Barracuda’ jacket that was imported from England. These jackets sold for $28.50 to $32 depending if it was short or long, and either style carried the distinctive red ‘Scotch-Plaid’ lining. These jackets were so popular and became a status symbol that, over time, other companies created knock-offs that were carried in local stores. But, there was nothing like owning a real ‘cuda.’ I am guessing over the past 50-plus years, at least six or seven of these long-wearing jackets once hung in my closet. I donated my last one, a short khaki, to a thrift store not because it was worn, but rather, it no longer fit, or maybe I just grew out of it. Each was considered to be pricy at the time; I know these classic jackets can still be purchased online, but, the price has risen to several hundred dollars.”

And, he wrote, “Besides Bear’s, the downtown played home to several shoe stores for men, women and children. Besides Bear’s, I liked to shop at Hanover Shoes, located just off the square. They carried many styles and their shoes were of first quality at a moderate price; not to mention they were manufactured in the southwest corner of York County in Hanover. My favorites were their burnt-orange penny loafers and shell-cordovan plain toe or wing-tips.”

Finally, Tom concluded, “Now back to The Bon-Ton, after the downtown store closed, I must confess I didn’t patronize The Bon-Ton as much as I had in the past. Following the closure of Mailman’s when The Bon-Ton opened in its place, I along with other family members became regular customers. Like millions of other shoppers who buy from places like amazon.com, there are still just times when I like to shop at a local ‘brick-and-mortar’ store. The downtown will never see the return of stores like The Bon-Ton, but it’s good to see a variety of specialty stores springing up to meet the needs of shoppers. With its closing just around the corner, there aren’t many businesses who have largely operated under the same family ownership for well over a century by providing quality merchandise at a moderate price and quality customer service. So, good-bye to an ‘Old Friend.'”

Tom, thank you so much for sharing those memories with us. I can’t think of a better tribute to The Bon-Ton.