Bizarre York County: A new twist from my friend Tom

Remember that earlier this week, I said something fun was coming Friday from a friend and coworker?

Well, I’m pleased to introduce Tom Joyce to you today. Tom is one of our metro reporters (he most often covers politics and government) and, well, he’s a character. 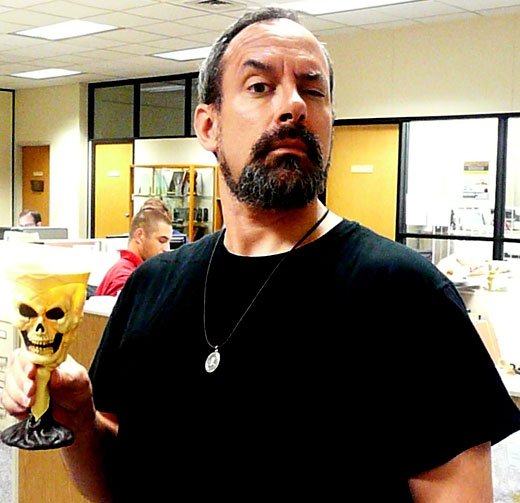 See? Character. Here’s a little about Tom in his own words:

“I’m sure this will surprise nobody, but other kids in high school frequently told me I was weird. I would always say, ‘thank you.’ I genuinely took ‘weird’ as a compliment. To me, ‘weird’ was synonymous with ‘different.’ It carried the same connotation as ‘distinctive’ and ‘interesting.’ The opposite of ‘bland’ and ‘nondescript.’ And that’s how I feel about York County, my home for the past decade. As anyone who’s spent any time in the area will tell you, it’s filled with weird, wonderful things. And I intend to explore them in a series of videos I call ‘Bizarre York County.’ I’ll be looking at unusual things not only here, but in the greater York County area. By which I mean the highly precise geographic definition of: Places within easy driving distance, where I was probably going anyway. So I invite you to accompany me on this exploration of (imagine the following words spoken in a dramatic Vincent Price voice) BIZAAAAARRE YORK COUNTY!”

You might guess that when I heard about Tom’s plan (and saw a sneak peek of the concept), I all but begged to feature his videos here. Where else would we find the perfect audience for some truly “Only in York County” strangeness? So I asked Tom to pop in every few weeks or so with a new video for us. What did he do to start?

In perhaps the best move ever, Tom took a look at the York Fair in one of his first installments. Specifically, his York Fair bizarre must-see matched something I always check out, so I figured, hey, this is a great place to start!

As a bonus, here’s a look at what was Tom’s first video, in which he meets some wanna-be killers. Well, sort of.

Let us know what you think of Tom’s efforts. Have any suggestions for some “bizarrities” for him? Leave a comment!

Ask Joan: Yorkers in Panama and many memories

Ask Joan: Following up on Camp Ganoga, Dover and more