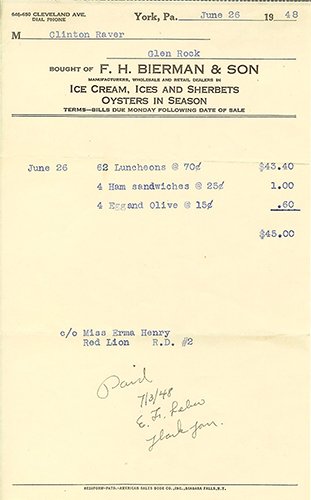 Again this week I’m working through an assortment of letters, mostly older, that I was originally saving for possible in-depth future columns. I do that a lot, so then you have to bear with me on the catch-up editions.

Almost two years ago, I had a letter from Kelly Frey Fulghum of Roanoke, Va. A friend of Kelly’s had sent her a copy of a previous column featuring memories of the former Bierman’s restaurant.

Bierman’s was at 650 Cleveland Ave. in York until it was destroyed in a 1977 fire. Kelly wrote, “Having been born and raised in York, I remember the restaurant well. With my grandparents and my family, we enjoyed many Sunday after-church meals there. Also, remember Mr. Bierman walking around greeting everyone. When walking home from Hannah Penn Junior High, our group frequently stopped for ice cream!”

Kelly said she was married to Frank Bierman, the oldest son of Fred and Fairy Bierman; she and Frank were divorced in the early 1970s, and Frank passed away in 2012. The two have a son, and Kelly was hoping to get print copies of two older Bierman’s columns to save for her son. I unfortunately don’t have a way to get those; however, if someone out there is a “keeper” who happens to have a couple of Sunday papers from June 2017, please get in touch – I’d love to get those to Kelly and would be glad to connect you! (It would probably be June 3 and June 25, but I am not 100 percent sure on that).

And if anyone has further Bierman’s memories to share, please let me know those too!

2. Stories from the Anstine Hotel

Way back in 2012, I had received a letter from Ethel Keller of Red Lion, asking if anyone remembered the former Anstine Hotel at Windsor and Freysville roads in Windsor Township. Ethel had been born there in 1932 and moved away in approximately 1937. 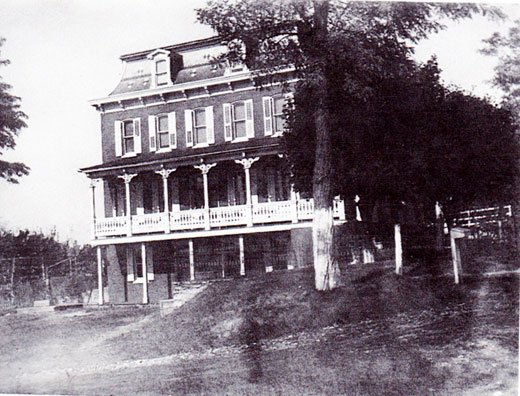 You can see the hotel pictured with today’s column, but I do not know the date of that photo. A search on Google Maps of Freysville and Windsor roads turns up a more modern view, for those interested.

I shared more reader memories of the hotel in 2013, and then didn’t hear much about it. Then, though, Ethel wrote to me again several years after her original letter to share more memories of the Anstine Hotel. She said, “While living there, I played with the Ritzes three daughters: Lois, Jean and Doris. They had a son, too; I don’t remember his name.”

She continued, “My parents had dinner plates, soup plates, soup bowls… they were yellow with gold edge and flowers with a peacock in the center. My mother still had one or two dinner plates in 1980. They got these when they bought a certain amount of ice cream at the Ritz gas station and ice cream shop combined.” That store was later run by the Keller family for a while, Ethel said, and an apartment complex now sits where that store was.

Ethel concluded, “When the Ritzes had it, it was a popular spot in Freysville.”

Ethel, I am so glad to hear more of your Freysville memories!

In two 2018 columns, I first shared a question and then some answers about the name of a grocery store on Market Street in Springettsbury Township, in what later became Danskin. Readers recalled that this store was first Snyder’s Super Thrift and later Yankee Super Thrift.

I got another letter later about that store from Gary Lehman, who recalled it when it was Yankee Super Thrift. Gary wrote, “It was a time of transition where small-town groceries went out of business. Hallam (borough) used to have Lentz’s and Flaharty’s. I was disappointed when Yankee Super Thrift closed and did not relocate anywhere. W.T. Grant was also next to Yankee Super Thrift.”

I wanted to share Gary’s brief letter about this after finding it in my letter files because I was just talking this week about some of the older small grocery stores in the Dover area, where I grew up and now live again. We still have a huge vacant store that used to be Spangler’s and later ShurFine; I’d heard that it might become a Lidl discount grocery, but I do not have any idea whether that’s got any chance of happening or not, as the plans would require some zoning variances. (There is a new Lidl coming near York College on Richland Avenue, though, which I’m excited to check out.)

At any rate, it made me happy to do some grocery reminiscing, so Gary’s letter was well-found!