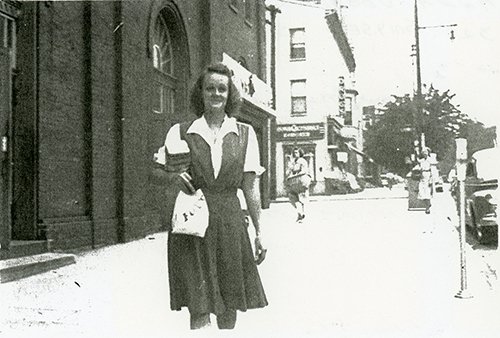 Jean Fix shared this photo of her mother, Anna Oberdick Myers, taken in about 1943 as she was leaving Farmers' Market in York. Jean wrote, "I'll bet that bag contained poppy seed rolls as they went with our weekly 'Farmers Market' supper. With the rolls, would be ham, cole slaw, potato salad and sugar cakes for dessert. What a nice memory!"
Posted by Joan ConcilioMarch 4, 2018May 7, 2018 Dallastown/Red Lion, Local memories, York City/Suburban

More reader letters on past bakeries

Today, I have a great set of reader letters to share about former York County bakeries, including Gehm’s, Barnhart’s and Zech’s, which we last talked about in April of last year. (I personally grew up as a Gruver’s devotee, a little later than those three, because of shopping there when my parents were standholders at Farmers’ Market on Market and Penn streets.)

I hope today’s letters give your sweet tooth a treat!

Reader Dorothy Ferguson of Manchester Township wrote to me that she had worked for Gehm’s Bakery while she was in high school. “It was directly across from the Rescue Fire Station in the 300 block of South George Street,” she added. “August and Helen Gehm were the owners and they had one son, Miles. Mr. Gehm was an excellent baker, making his own ice cream, eclairs, cream puffs, Christmas and Easter stollen, Danish pastry, lemon buns, all different kinds of cookies, etc. I could go on, but too many products to mention. I enjoyed when customers came in and they conversed in German.”

She continued by noting that a reader named Barb Moncuse had earlier written and asked for Gehm’s cheesecake recipe. “I do not remember ‘cake,'” Dorothy said, “but a rectangular cheese pie. It had a pie crust bottom and sides. You could either buy a whole pie, a half or a quarter of the pie. It was really tasty. When I started in the early 1950s, Mr. Gehm said I could taste everything, so I could tell the customers about the items. Boy, did I pack on the pounds! It was my first experience dealing with the public and it taught me to be patient. I was paid 50 cents an hour and I was tickled pink for that amount.”

Dorothy added, “George and Charlie Geisler were the bakers there; also, we had a delivery man named Henry Folcomer. I rotated nights with a lot of other young employees. There was an older lady there, Mrs. Gallatin; we all called her ‘Gally.’ She was nice, but kept us all in line.”

She continued, “I always felt safe there at night. If I recall correctly, we were open till about 8 p.m. I knew the firefighters across the street kept a constant watch on the young employees at night. Mr. Gehm kept me employed even after I got a ‘regular job’ after graduation. It was mostly during the Easter and Christmas seasons when they had the stollen to be wrapped and other items to be made and packed. It was a really enjoyable job and I was glad for it. My mom was a widow and I started to work as soon as I was old enough. The money came in handy back then. (Even now, money is needed, right?)”

Dorothy also wrote, “On the second floor of the building was a plumber and his wife. Their last name was Mann. We would see them go up and down the steps alongside of the bakery door. Alongside of the firehouse was a beer joint named Kehm’s. Some nights I had people come in looking for the beer place, since the names were so similar. We also got transient people looking for some free food. We never turned anyone away. Mr. Gehm instructed us to always give those people something.”

She continued, “Wish I could remember more. They were interesting years. Almost forgot, Mr. Gehm gave my husband and I our wedding cake as a gift in 1956. I had met my husband Jack when he was a volunteer at the firehouse. Lost track of each other, him to the Army and I got a job downtown. One day while walking to work, he was on duty as a firefighter at Duke and King. We connected again and married… unfortunately, he passed away unexpectedly in 1987. By this time he had already retired from the fire department after 26 years.”

Dorothy, I was so happy to hear those memories! Thank you so much for taking the time to write them for us!

I also heard about Gehm’s from Sue (Geisler) Dycus of Spring Grove, whose letter was the perfect segue from Dorothy’s! “My dad was George Geisler,” she began, and continued, “He took over Gehm’s Bakery and later changed the name to Ye Olde York Pastry Shop. He was well known for Danish pastry, hard rolls, stollen and cheese pies. Yes he and his brother, Charlie, were excellent cake decorators, especially wedding cakes.”

She continued that she doesn’t remember Tastykakes too much growing up; “I remember I loved my dad’s baked goods too much!” she said. “Still do, which is probably why I’ll never be skinny! I know my dad loved Tastykakes, go figure. He went out of business around 1969. It was getting harder to compete against free parking and supermarket baked goods, mass production. My dad remained a baker til his death.”

Sue, I am so glad to hear from you! I am right there with you in loving the baked goods, I have to admit.

Barbara Roth of Windor also wrote to me about bakeries last year (and in fact has written about many other topics, including the Santa Claus pins given out by The Bon-Ton to children who sat on Santa’s lap each year, as well as something more seasonally appropriate, the Marshmallow Peeps that used to stand up instead of lying flat.)

Barbara wrote, “Speaking of Zech’s Bakery, I remember the bakery in Yoe. I was a friend of the adopted twin girls, Jean and Joan Zech, especially Joan. I still go by the house/bakery in Yoe. The same screen door remains there – not in good shape; rusty and torn.”

She continued, “When Zech’s built a new home in Dallastown, I was a guest there for overnight (sleeping) and eating dinner there. Mrs. Zech told me the girls would not eat any food that they couldn’t put ketchup on. Joan is now deceased and maybe Jean also. I also remember the Zech’s bakery in Red Lion. I lived in Red Lion most of my life.”

Then, Barbara went on, “Now, to the Barnhart’s Bakery. My family and I lived a street behind the bakery. My daughter and some neighbor friends would stop after school for a small pie (maybe 10 cents). The bakery was located at 111 W. Gay St. in Red Lion. There was a small alley aside of the cellar door the customers and employees used.”

She added, “The house (bakery) grew too small, so they built another part to it. Above, they added a dining room. The kitchen was enlarged by enclosing a side porch; a powder room was also added. The reason I know this: I bought this house (after a 23-year marriage and divorce). I lived there till 1998, then sold it.”

And, Barbara concluded, “The pies were delicious. I don’t know the year they retired. Someone else had bought the house before I did.”

Barbara, what a great York County history story! I thank you very much for sharing.

A reader question about a bank

I have one reader question today, from someone who asked about the former County Market grocery store in the Crossroads shopping center (formerly Manchester Crossroads) on Route 30. My reader writes, “They had a bank in there back in the day as other grocery stores did then. I would like the name of the bank and specifically when it left the store.” Many people remember the bank – and I remember County Market well myself, as we shopped there often – but its name and specific date of closure are what this reader needs. Any ideas are welcomed!