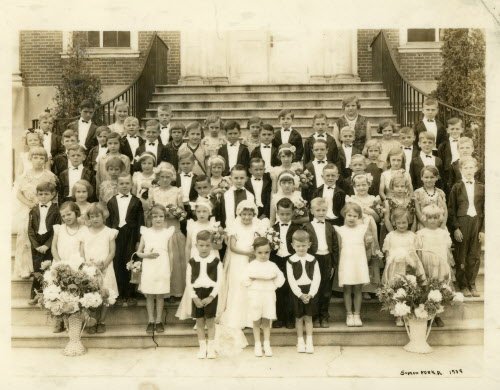 Dale Schaffer of York Township submitted this photo to the York Daily Record/Sunday News. The photo was taken in the 1930s of a Tom Thumb Wedding that took place on the steps of the York Haven Library. Several dozen children are wearing dress clothing that their mothers, or the mother of a classmate, made for them. The children are third through eighth grade students from York Haven Grade School. Schaeffer is in the second row, fifth from the right with Anna Walton, his "bride" being next to him, sixth from the right.
Posted by Joan ConcilioMarch 25, 2019March 26, 2019 Local memories, York City/SuburbanNo Comments

Today, I have a special Ask Joan request for all of you who are reading: I’d love to hear your York County wedding memories! From wedding dresses to venues to honeymoons, I want to know all about it.

(That’s because, by the time you’re reading this, I will be newly married! My fiance, former YDR Innovation Editor Dan Herman, and I tied the knot on March 24 at the Out Door Country Club, and this column was written before we departed for our honeymoon cruise.)

Today’s column does touch on some other questions, but I’m interspersing some fun wedding photos from York’s past – and stories about our recent ceremony – in my own honor. I hope you enjoy!

I found this email from Greg Fife because I was searching my emails for things with the word “wedding” in them!

Greg said, “I am writing about Sitler’s Dress Store. Ralph Sitler, the proprietor, was my great-uncle. He owned the dress store in the 200 block of East Market Street from the late 1940s into the 1950s. According to other family members, it was a very popular dress shop. Many family members bought their wedding dresses there. And former Governor George Leader’s wife bought her inauguration gown there as well. After he sold the dress store, he opened a hat and handbag store in the square, today where Wells Fargo Bank is located. After the bank took over that area, he moved the shop around the corner to South George Street. Sitler’s hat shop was the premier hat and handbag store in York. In the 1960s and 1970s, a lady wouldn’t dare go out of the house to dinner or church without a proper hat. Sorry, but I am not good with exact dates for the various stores and locations. Ralph Sitler was also city treasurer back in the 1930s or 1940s. And Jeff Koons, the popular artist, is Ralph’s grandson.”

Greg, thank you so much for that! I found that a fitting note as I celebrate my wedding… in a dress bought from York County’s own Renaissance Bridal, where I shopped with former YDR editor Kara Eberle – and, after buying a dress, had it altered by local seamstress Linda Poff of Dover Township.

(No hat, though. Not even a veil. My short hair – styled by Amanda Lehman of Country Clippers in Rossville – is too funky for that!)

Longtime reader Bill Heindel shared another note that I found while digging for wedding-themed items.

Bill wrote in response to a column about, of all things, the tiny Isetta car. The Isetta dealership in York was owned by Earl Sollenberger, and Earl’s son Ray was described by one reader as “having a singing voice that rivaled Mario Lanza.”

Bill agreed. “I can attest to that,” he wrote. “Ray sang at our wedding 55 years ago. We still have the tape recording of our wedding and his singing was wonderful. By the way, Ray delivered milk for Rutter’s Dairy. He was my parents’ milkman.”

Bill, I was happy to hear that! I mentioned earlier that Mario Lanza is one of my mom’s favorite singers. She and I recently unwound from our wedding preparations by watching “The Student Prince,” a movie in which, oddly, Lanza sings but is not the on-screen star due to a big fight between him and the studio.

(In full disclosure: There were no York County musical talents on display at our wedding; we were fortunate enough to have friend and longtime reader Tracey Stoppard DJ for us, and all musical stylings were courtesy of Pandora, not live.)

3. A mini follow-up on dress shop

A couple of weeks ago, reader Ruth Kessler asked about a dress shop on Route 30 in West Manchester Township.

I have not heard much on that yet, except from one reader, Ronald Brodbeck, who wrote to tell me that he thought this location might have been a bridal shop. That was a fun coincidence and I’d certainly like to hear more!

One final fun wedding note today is a “two-for.” The image you see today of the Avalong receipt comes from Sue Shirey, a longtime reader who saved it for years. I met Sue because she used to work with my best friend, Nina Myers, at GGS Information Systems. Nina has since left GGS and is now a professional photographer – who took my wedding photos!

All in all, I think I was able to have a pretty great York County wedding, and I can’t wait to hear about your own memories of similar!