If any Ask Joan readers have a spare Ford Taurus transmission just, you know, collecting dust under your coffee table or something, I could probably find a good use for it!

Barring that, my travels around York County are likely to be curtailed for the next week or so as I get one and have it installed (and somehow fund this endeavor). I told the poor man at the garage that he’s not my friend any more.

1. Several years ago, I heard that York Haven was named as the All American City. I believe it was during either WWI or WWII. It was because of the amount of soldiers per capita. I can’t seem to find anything out about this and would be interested in finding info on this.
– Lana Fink

For information on this, I knew right where to turn – I asked Jim McClure, and he directed me to his awesome “Never to be Forgotten” book.

It was, in fact, during World War I that York Haven was honored, though not for the number of soldiers but rather another type of patriotism.

2. My parents got married 50 years ago and had their reception at a restaurant that was located near York Little Theater, behind Bentz’s furniture. Do you know what the name was in 1961?
– Kate Sharpe

I am hoping one of my loyal readers with a copy of the Polk York City Directory will help me out with this one… if it’s included, since it is possibly beyond the city limits! Any info for Kate? 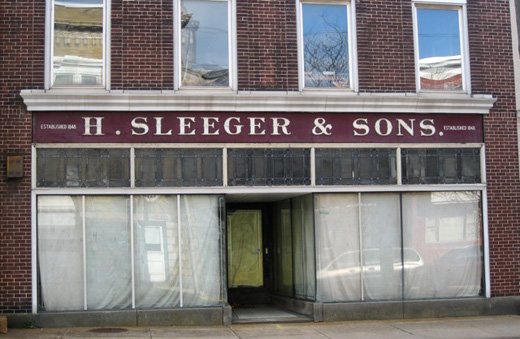 3. My father, Levere Ehrhart, often spoke of his working at Sleeger’s in York during the Depression. I noticed a while back that the store front still exists on East Market Street just past Sherman Street. Do you know anything about H. Sleeger & Sons or where I could find some info on it.
– Dave Ehrhart

Dave shared the photo above of the storefront as it appeared earlier this year. Does that jog any memories from anyone who might have information on Sleeger’s for Dave?