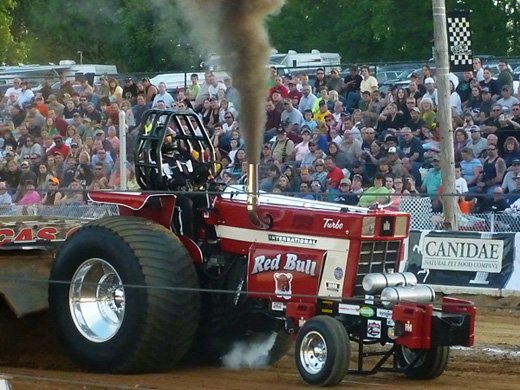 Guess what we did this weekend? Sarah and I went with my best friend Nina and her son and boyfriend to a tractor and truck pull at The Buck. A TON of fun! (You can read more and see more photos here.)

We’re hoping to go back on Memorial Day weekend to see the demolition derby.

1. I recently received this picture from my brother in Texas. He found it with some old pictures that our mother had. We were wondering if you could help us, since our mother is no longer with us, identify the people as well as the location and occasion. Your help would would be greatly appreciated.
– Richard A. Nace

Here’s the photo Richard is describing: 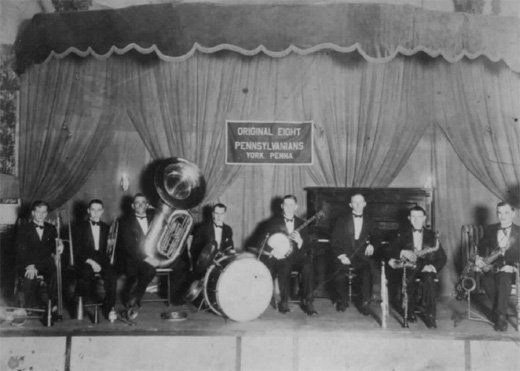 You can see the musical group pictured is, presumably, the “Original Eight Pennsylvanians” from York, PA. A variety of online searches and a look into the paper’s archives turned up NO information on a group by that name, so now we’re counting on the great collective memory of York County to help Richard. Any ideas?

2. Does anyone remember Howard’s Grocery Store on Eberts Lane and Hartman Street? In the 40’s and 50’s. There was another grocery store called Gilbert’s on Hartman and Phila. Sts. The Howards were a nice older couple and I worked in the store when I was in high school.
– Jo Shuemaker

Any memories for Jo? I’d love to help her out, because…

THAT was an answer to a question from Beverly in this April Ask Joan. Beverly and her husband were in the middle of a debate on the subject of where Mr. Geesey, an insurance agent, lived.

It turned out that a LOT of folks remembered Mr. Geesey and his home. Connie says “Mr. Geesey and his family lived at the top of the hill on what is now Windsor Rd. Driving from Freysville to York, go past Shady Grove Park and the entrance to the elementary school. Mr. Geesey’s home was the stone home on the right and both of his daughters lived in the homes to the left.”

Kevin Holzer writes, “Roy L. Geesey was born in 1897. His wife, Esther was also born in 1897. They lived in the big house (on the east side) at the top of Chestnut Hill on Windsor Road. The home was later bought by the Gutierrez family. The house had a big ‘G’ on the chimney. Their daughters lived across the street. One daughter, Doris was married to J. Ray Zarfoss. I do not remember the name of the other daughter and husband. We lived in the big farmhouse, which we rented from Mr. & Mrs. Geesey, at the foot of Chestnut Hill from late 1957 until we were asked to move out in mid 1977. By that time, Mr. Geesey had passed (1969) and Esther was being readied to move into a retirement home and needed all of her life issues ‘cleaned up’ before. My father took us along to the Roy L. Geesey Insurance office on East King Street monthly to pay the rent. Can you believe, it was a whopping $50.00 per month back in the early 70’s as I was growing up. At Christmas-time, Mrs. Geesey would always make it a point to bring us all some toys!!”

Wow, Kevin, that’s an amazing story – I am so glad you happened on the request and were able to share!

Jeannette G. Dorwart also shared the location, as did Bern Bevenour, who added that Geesey’s property was surrounded by a wooded area. “He had a name for it but I don’t recall what that was,” Bern said.

And John D. Toomey writes, “The answer to the debate question on the Geesey Homestead is Windsor Road. The homestead was located on top of Chestnut Hill, on the left, traveling on Windsor Road towards Freysville. I lived on Windsor Road, as a child, from 1958 to 1967 and had the opportunity to swim, at the home, with James Zarfoss who was a Grandson of Mr. Geesey.”

Thanks, everyone! I’m sure Beverly and her husband will be happy to know that one of their three guesses was the right one! (They’d said it might be Windsor Road, Queen Street or George Street.)