My workday today was spent dealing with the news of Osama bin Laden’s death for the YDR’s news website. Which explains why it’s almost 11 p.m. and I’m writing “Ask Joan” from the comfort of home! I hope you’ll forgive the delay.

Today’s edition marks the first Ask Joan follow-up roundup. Because part of my job when I’m asked questions is simply to put people in touch with organizations or individuals who can help them, sometimes my first answer isn’t the last word on the subject. These occasional roundups will help curious readers see what we’ve learned.

What’s inside
1. A quick word on Dietz’s Lawn and Garden Store
2. How Oil Creek’s name came about
3. More about the Pine Tree Inn
4. Development in Shrewsbury
5. The mystery of the Green Frog

1. Back on April 11, I shared the first but probably not last Ask Joan question from my husband, aka YDR sports editor Chris Otto. 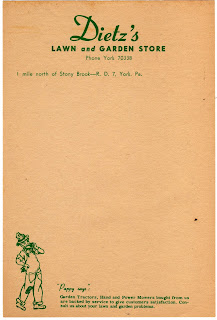 Chris has a blog where he writes about interesting old books and papers, and he found one sheet of notepaper from Dietz’s Lawn and Garden Center, but we couldn’t turn up any info on that business at the time.
I’m pleased to say I’ve since received a lot of Dietz’s information. In fact, I have so much that I’m going to write an entire separate post about it, so today’s note is just to ask you to stay tuned next week for more on Dietz’s!

2. In our April 18 edition, Blake Stough asked how Oil Creek in the Menges Mills area got its name. I was able to connect him by phone with a gentleman who had an idea.

From Blake, regarding their conversation: “CW (I won’t give his name here) is a 90 year old man who is very knowledgeable about York County history. Upon speaking with him, I realized he lives less than 1 mile from my house. He said he does not believe the creek was named after petroleum-based oil due to the geography of the area. He mentioned it may be from linseed oil from a mill, but doesn’t feel there were mills along Oil Creek. His belief is that it may have been named Oil Creek from wastewater that may have been dumped into a tributary from a rendering plant that once was located along Center Street in Hanover. He feels the animal oils and whatever else you can imagine from them processing animal carcasses may have been dumped into the water, thus giving it the name Oil Creek. He remembers the plant being there circa. 1930 (when he was 10) and owned by a man named Reese who apparently had a great deal of money and lived in Hanover. I’m looking into this plant to see when it may have started its operation. CW also felt any oil in the creek would take a long time to dissipate due to the calm and meandering nature of the creek.”

3. Also in the April 18 edition, Sylvia Lee asked if anyone remembered the Pine Tree Inn and where it used to be west of York. We were able to get a lot of clarity on that from several very helpful readers.

Rachael Gromling was the first to respond and even took a trip to the area in question! She writes, “The Pine Tree Inn was an elegant eating place west of the city along Rt. 462. I remember going there approximately 60 years ago to a Mother-Daughter banquet, probably church related. I found out then, that sugar cubes (remember them?) do not dissolve for a long, long time when you put them in iced tea. I think the brick building is still there, but the pine trees are gone.” When I asked her in return where along Market Street it was, she replied, “We drove out to the 2500 block of West Market Street. The brick building that was the Pine Tree Inn is now the Treasure Chest Antiques business. There are about two pines trees standing there yet.”

Scott C. writes, “The Pine Tree Inn was located at 2510 West Market Street in West York. It used to be Fireside Caterers and also was a Gun Gallery” before becoming the Treasure Chest business mentioned by Rachael.

Diane Folkenroth even had details on the owners! She writes, “Joan, regarding The Pine Tree Inn – located in West York next to the Genova Pizza location. Mr. & Mrs. Hatfield owned this place around 1954 and had a nursery/kindergarten school. I attended this private school and remember great times as a child. Mr. Hatfield would wake us up from our nap time by playing nursery rhyme songs on the organ.”

4. Yet another April 28 follow-up; Dave had asked for info on some new construction in the Shrewsbury area.

I was able to have our southern York County correspondent Barb Krebs get some more info on that; after talking to sources in both Shrewsbury Township and the borough, we found this to be in the township on East Forrest Avenue, and plans call for it to be an auto repair shop, pending PennDOT approval of the traffic patterns that would require. Turns out it used to be a trailer park, which was recently razed.

5. On April 25, I printed a photo and letter from Iline Glatfelter asking for info on the Green Frog, a business her in-laws used to own or manage.

I received a response from Larry Good, who was able to help pin things down a little. He says, “I remember the grown ups talking about this in the 40s. Near as I can recall It was located on the Susquehanna Trail between Zions View and Strinestown traveling North. I think.”

Larry, that’s a great start and will help me do some more research. (And, if you can help Larry out, he has a question of his own: “Another tough one I struggled with was the York Haven bottling works, I own two bottles from there.” Any ideas on that former business’ location?)

I greatly appreciate all the feedback, as I’m sure the original questioners do. I look forward to answering even more questions next week!

Got any questions? Ask Joan using the form at right. I’ll attempt to answer them in a future “Ask Joan” column on this blog. I’m already getting a big volume, so it might take me a while, but I hope to be able to answer as many as possible!

1 comment on “Ask Joan: Tied up with world news edition”