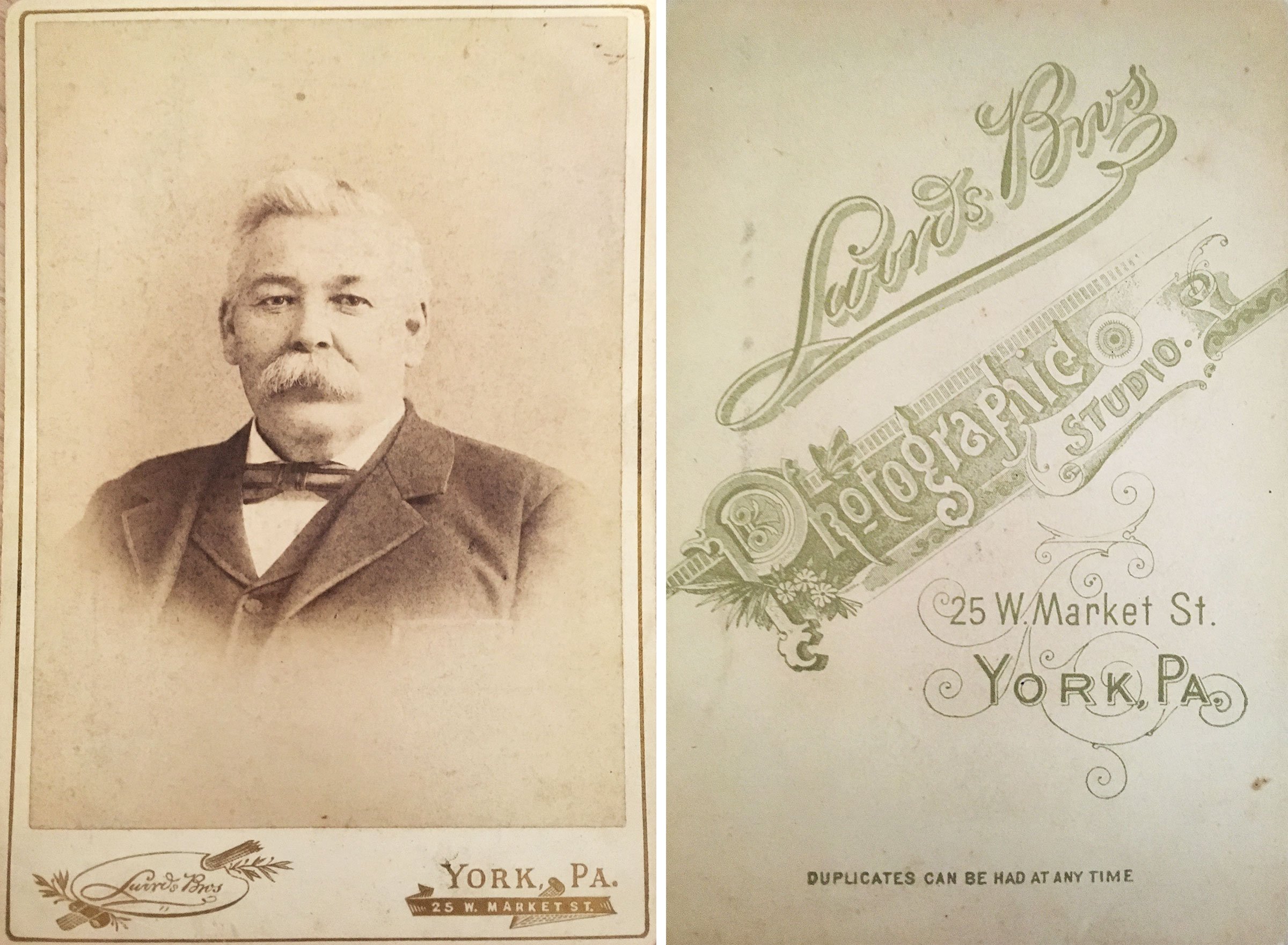 Longtime reader Bill Landes was kind enough to share some York County emphemera and a very cool copy of the York High Tatler yearbook for the class of 19M30 earlier this year. This mystery photo was among his items - taken at Swords Bros. Photographic Studio, 25 W. Market St., York, PA, with no name or date available. Two interesting notes about Swords Brothers: It was mentioned in the 1988 book "Freak Show" by Robert Bogdan as one of many studios across the United States that specialized in photographs of people considered to be the "oddities" of their day; and, fellow blogger Stephen H. Smith has documented its multiple locations in York and Hanover extensively on his Yorkspast blog, including photos of Wild West sharpshooter stars of the late 1800s. But who is pictured and when was THIS image taken? Any insight is welcomed!
Posted by Joan ConcilioDecember 3, 2019December 3, 2019 Ask Joan, Central/Eastern, Local memories, Things we say, York City/SuburbanNo Comments

Do you like old things? I celebrated my birthday last weekend, so you had better!

You can get your tickets (they’re $10 apiece) at yorkblog.com/onlyyork/storytellers-2019. I’m looking forward to seeing you there! I’ll be talking about something seasonally appropriate that interests pretty much literally every York Countian with disposable income. (And no, it’s not food, though that would fit that description… You’ll just have to come find out!)

For now, though, I have a few short letters to share!

In addition to York County memories, longtime readers will know that I occasionally like to touch on our “Pennsylvania Dutch” (Pennsylvania German) linguistic roots as well. I haven’t written about them for a while, but recently found a letter from David Seitz of Glen Rock, who wrote after reading a 2017 column on how the Pennsylvania German and English syntaxes are different.

David wrote following that, “You only mentioned how the syntax was different. You did not cover the different pronunciation of certain words, such as ‘tar’ for tower, ‘aran’ for iron, ‘par’ for power, etc. Sometimes it made it difficult to understand exactly what the speaker was trying to communicate.”

He noted, “I am a native of Glen Rock, 3/4 German, 1/4 English, so I grew up with this manner of speech all around me. I stopped using these mispronunciations when, in a chemistry class at the University of Delaware, the instructor asked me what FeCl was. I replied ‘aran chloride.’ He asked me to say it again and I did – ‘aran chloride.’ By this time, the entire class was in hysterics. That was my exit from Pennsylvania Dutch pronunciation!”

David, you’re so right that it’s not just what you say, but how you say it! I had a good friend in high school, Phil Warner, who we made fun of because he had one pronunciation for three different words – pool, pole and pull. They all sounded sort of like “puuuhh-ell,” none distinct from the other. It was also Phil’s family who taught me how to correctly (by York County standards) describe someone as busy – by saying they have a lot of “airns” in the “fair” (irons in the fire!) Your letter brought me back to those fun times figuring out what, exactly, the Pennsylvania Dutch families around me were saying. My own family is originally from the Philadelphia/southern New Jersey area, so our accents are… a different kind of different!

We’ve talked about Carl’s Newsstand in several columns earlier this year. After one of them, I received a short note from Ed Benovy of the Red Lion area, who remembered Carl Cassel, the proprietor, and said, “I remember him on South George Street. In the rain, he would bring your paper to your car. He always knew what you wanted.”

That matches everything I’ve heard about Carl and his excellent customer service, Ed! Thank you so much for sharing your memories of him.

Finally for today comes a letter from Nancy Arnold, who wrote following a column this past summer about music lessons.

Nancy wrote, “There is a lady who lives in North Hills (off of Route 30) who taught piano in the 1970s and 1980s. She allowed our children to use her piano to practice and take lessons to see if there was enough interest to continue. She charged 50 cents a half-hour in the beginning and later we raised the price as our children continued.”

She noted, “One of our four has played all her life and now plays for musicals in the Allentown area. We are forever grateful to Janice Elstrodt.”

Nancy, I’m so glad you wrote in to share how much Janice’s lessons meant to your family! I am always excited to hear stories like yours.