Continuing with yesterday’s theme of memories of the Dogtown area of West York, I have two letters today to share.

The first comes from a good friend of mine, Carol Hemler.

Carol writes, “On December 31, 1948 I was born at home at 1425 College Avenue Extended. In that next year my family moved from Dog Town to Lafayette Street Extended which is just two blocks from Richland Avenue down there close to the Richland Avenue Bridge over the Codorus Creek. We could get to Dog Town by going Zinn’s Quarry Road. There was a Quarry on one side of that road and the Codorus Creek on the other side of Zinn’s Quarry Road. Being the baby of the family, I didn’t remember anything about living in Dog Town. I talked to my older sister Ada … She and my 3 brothers went to Highland Park School. She said it had 3 rooms. She also told me that West College Avenue Extended ended at the 1400 Block back then. When you got to Adams Street you had to turn right to go up the hill to get to West York or left to go down Salem Road. She said that Salem Road was the road to York New Salem (notice I said YORK New Salem). I think they’ve changed the name to New Salem. I’m sure the kids considered that they lived in Dog Town even though they were on West College Avenue. Ada said that way back before she can remember, there were Trolley Tracks coming into Dog Town. She didn’t give me much detail about the three room school. She said that they had to walk to West York High School which was in the 1700 block of West Philadelphia Street. She also reminded me that they didn’t close school for snow. She does remember Bupp’s Grocery Store. … By the time my other sister was going to school in early 50s she and I went to Lincolnway Elementary.”

The geographic points of this were what most interested Carol. She continues, “My surprise with the conversation was that West College Avenue ended at Adams Street. As a kid I can remember my brothers and sisters riding their bikes from Lafayette Street to Dog Town to visit their friends They’d just ride up Zinn’s Quarry Road. There are stories of the kids (boys) going into the quarry and climbing the walls. It was a working quarry back then. Ada tells me that it is filled with water now and that road is closed. I never rode my bike to Dog Town because I wasn’t supposed to go past the quarry. LOL!”

Tying in with Carol’s interest in the layout of the area comes a letter from Rosie Shaffer of Lower Windsor Township, who even included two maps. (You can see the first one at the top of this post.)

Rosie writes, “I remember Bupp’s grocery store in Dogtown 1473 Salem Road. Salem Road used to be a complete road to Hoke’s Mill Road to Indian Rock Dam Road … past the Codorus Creek back in the 1950s.”

She continues, “The 1400 block of King St. there used to be Fishel Bakery; made bread and sticky buns and cinnamon buns. When I was a young girl we (my sister & brother) used to go to Bupp’s store and buy a quarter’s worth of Lebanon bologna and a quarter’s worth of American cheese to make sandwiches. When we bought a quart bottle of soda we paid a deposit on the bottle. When we returned the bottle we got paid a nickel. We would get a nickel worth of penny candy… 2 mint juleps for a penny, 4 small malted milk balls in a pack, licorice babies and bubble gum balls. The school house a few doors east of Bupp’s store on Salem Rd., my mother went there to school in the 1930s. My older sister went there for a few years in the 1940s. Then when they closed the school she was transported to Lincolnway Elementary.”

Then Rosie adds, “After Bupp’s closed their store, it became Flickinger store. Dogtown was where my grandparents lived. My mother was born there. My older sister started school there. My dad, brother and sister and I would take walks east on College Ave. to Hoke St. to west on Salem Road to Adams St. then back east on College Ave. Lots of neighbors would sit on their front porches and Dad would stop and talk to some of them sometimes. We knew the names of most of the people on the 1300 and 1400 blocks of College Ave. and Salem Road.”

Rosie says, “My husband and I sometimes take car rides past the old neighborhood to see how it has changed since the 1950s. I remember when they closed Salem Road west of Adams St. (became quarry). Remember when a family moved into old schoolhouse on Salem Road.” 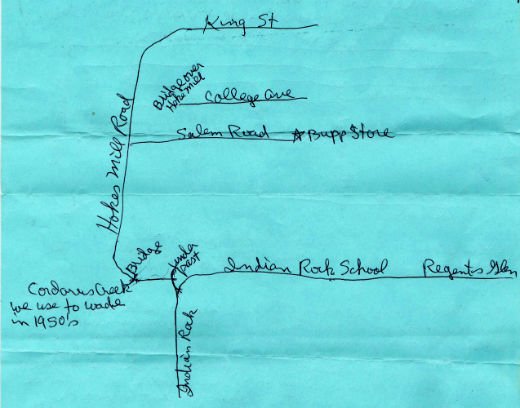 Rosie signed her letter, “Born and raised in Dogtown 1948-1970. 1970 married moved away.” Rosie, thank you for sharing those thoughts from your Dogtown years. We really appreciated them all.