Sometimes I’m just floored at the number of memories I receive of former local businesses. Today’s Ask Joan touches on just a few of them; my inbox has literally hundreds more at any given time!

1. As we talked about businesses along Market Street in past columns, one that came up was a noted furnituremaker and undertaker – and that company, H. Sleeger & Sons, has a rich history that many people remember!

Jonathan Stayer writes, “Henry Sleeger was a prominent York County cabinetmaker and undertaker. He was a descendant of George Sleeger, a German soldier (‘Hessian’) who settled in York after the Revolutionary War. About 20 years ago, I did some research on this family, and the results of my research will be found in the library of the York County History Center. George Sleeger was one of Lewis Miller’s ‘Hessians,’ so we have a sketch of him.”

Meanwhile, Barb Sleeger noted, “The photo published is of the Sleeger Furniture store that was started in 1848 by my great-grandfather Henry Sleeger Jr. and closed 107 years later shortly after the death of my grandfather, Arthur Sleeger in October 1955. Up to that time it was a combined business with the furniture store and funeral home located next door at 822 E. Market Street. My father, David H. Sleeger, and his brother George continued to operate the funeral home until my father’s death in 1972. The three generation family business came to an end in 1975.”

Barb also noted about the family business, “Along with the regular furniture showrooms, I remember the upper floor of the furniture store housed a casket showroom where families could see what they were purchasing. My dad was involved in all aspects of both businesses from furniture sales, deliveries, installations and repairs as well as being a licensed mortician. My dad would have been in his 20s during the Depression and most likely would have worked with Levere Ehrhart in some capacity. We lived in the apartment above the funeral home and saw many changes over the years. Keyboard Music Studios occupied the building for many years and afterward Monroe Brandt Vending Machines operated a business there. Both businesses had signs that covered up the Sleeger name for a long time.”

We’ll be talking more about Keyboard Studios later this week, too, so check back for more memories of that; meanwhile, Barb also writes, “In the 1990s the properties were purchased by John Danner and he opened his funeral home on the premise. It was then that the sign was removed from the old furniture store revealing the H. Sleeger & Sons sign once again. I was really surprised to see it after so many years! It certainly brought back lots of memories for me.”

And Edwin Benson mentions, “I live in Harry Sleeger’s house about a block east of the store/funeral home. I know that Harry was one of the three sons of Henry Sleeger who operated the business after the death of their father. Harry married his wife Catherine Miller in 1899. They apparently moved into my house about 1907, and lived here until their deaths. They had one daughter, Margaret, who died in 1922. Henry died about 1930 and Catherine in 1939. I would enjoy having more information about them, and would love to have a photograph of them to hang in their home.” Edwin, I hope you and Barb can get in touch; I’d love to see you be able to make that happen!

Connie Sheely-Good of York said that she believes that around the time her parents married in 1938, her dad worked there and helped with embalming.

And finally, Paul Schiding shared with me a copy of “In Lasting Tribute,” a history of the Sleeger Funeral Home on East Market Street. This is an incredibly detailed history; if you happen to see a copy, it’d be well worth picking up. 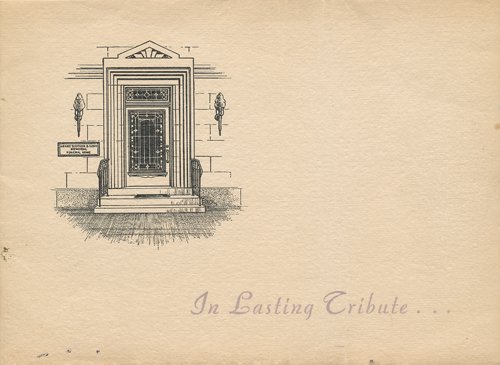 Paul also shared these checks written in 1901 on the account of Henry Sleeger furniture store and funeral home. 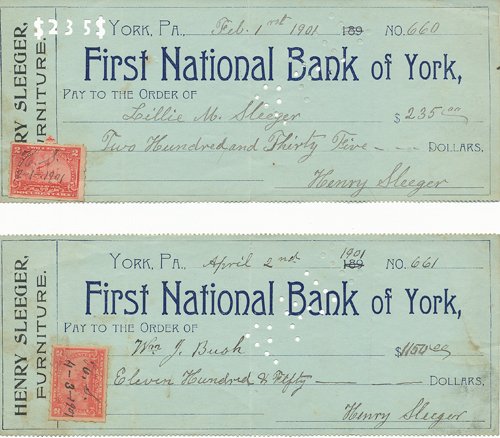 How neat! Thanks to all for sharing!

2. I’d also like to follow up today on a former church on Catholic Valley Road outside of Glen Rock.

John “Otts” Hufnagel of Glen Rock shared these photos from the former Sts. Peter and Paul Catholic Church, which was a mission church of New Freedom Catholic Church. 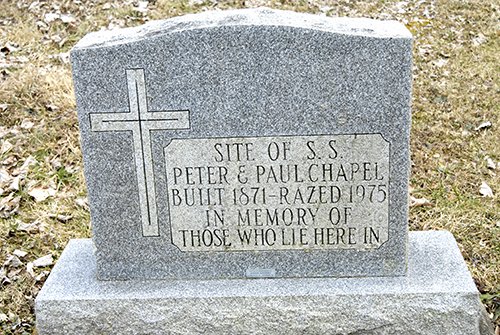 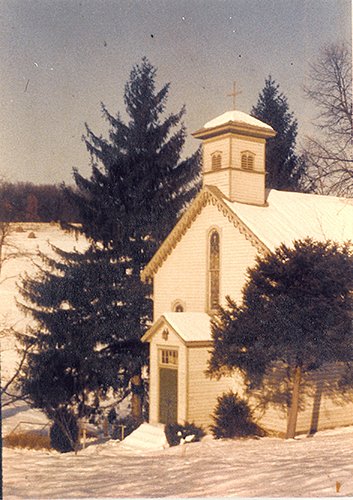 Otts writes, “I have attached a photo of the Catholic Church my father took on Catholic Valley Road and an insurance policy with the actual name of the church on it. My great, great grandfather was caretaker back in the early 1900’s and lived about 3/4 mile from the church on Catholic Valley Road. He and his wife are buried there. According to the insurance policy which was taken out in 1916, the church was built 37 years prior, making it 1879. Not sure when it was torn down as the picture has no info other than church in Larue… Yes, the New Freedom Catholic Church was in charge of this church and they were the ones who decided to demolish it instead of maintaining it. Don’t think it had been used for the past several years prior to being demolished. Guess insurance policy with built 37 years earlier was incorrect should have been 45.”

Blake Stough noted that this church was near the village of Larue, and added, “According to ‘Prowell’s History of York County,’ which offers very little information, ‘St. Peter’s Catholic Church, situated in the southeastern part of Codorus Township, two and a half miles northwest of Glen Rock, was built about 1875. The church is served by the priest who has charge of the congregation at New Freedom.'”

Elaine Miller noted, “As for the Catholic church in Codorus Township, I’ve been searching my memory bank, trying to recall when it was torn down. It was located along Catholic Valley Road, a short distance off Rt. 616 between Glen Rock and Seven Valleys. The church and cemetery sat on the left, on top of an embankment. The cemetery is still there, but difficult to see because they re-graded the high embankment after the church was torn down (late 1960s/early 1970s is my best guess) It was a tiny church and I recall wondering what became of the stained glass windows when it was torn down. I’ll let you know if I can find out more from my ‘older’ siblings.”

Many thanks also to Dorothy E. Gladfelter, whose husband, Armand Gladfelter, wrote several books on the history of the area surrounding Seven Valleys, including that church.

Bill Unger of Shrewsbury sent the following map, saying “This should help on your question on Catholic Valley Rd.!” 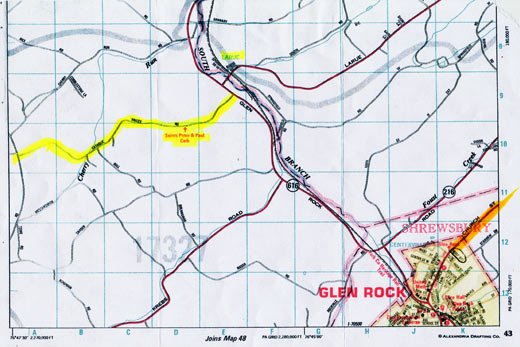 And longtime friend and correspondent for the YDR Barb Krebs notes, “Catholic Valley Road in Codorus Twp, just over the hill from the Krebs Farm – my father-in-law and other locals used to call that area Catholic Kingdom – most of the residents were Pennsylvania Germans, Lutherans and not all were tolerant of ‘other’ religions. Unfortunately many of the folks I used to rely on for this kind of history are gone – but I think it may have been called the Chapel of St. Peter and St. Paul. It was a small church, really a chapel, yes there was and still is a cemetery but the church/chapel is gone. There were problems with vandalism and someone stole the copper spouting etc. I think it was part of St. John the Baptist Catholic Church in New Freedom, toward the end they may have held services there once or twice a year, eventually it the church was torn down but the stained glass windows were preserved and used when the St. John’s congregation built their new church in New Freedom.” Great to know the whereabouts of those windows!

And Mark Raffensberger of Dallastown writes, “Many of my mother’s ancestors attended the church and are buried in the cemetery there. My mother is Loretta (Ryer) Raffensberger. The original Ryers (Jacob and Anna Marie – my great-great grandparents), who immigrated from the French Alsace-Lorraine region in the mid-1800s, are buried in the cemetery along with several of their offspring. My grandfather, Jacob A. Ryer was baptized in the church in January 1888. My mom still has his baptismal certificate – it is recorded in German!”

Thanks to all for these great memories!

3. Finally today, I’d like to round up some memories that came in after the Finds from former businesses edition of Ask Joan last September.

Betsy Baird said she remembers Steve and Warney’s Service Station. “It was at the corner of S. Penn, W. King & Salem Ave. We lived a block away, on W. Market St., ‘Doctor’s Row.’ Mother would stop there all the time to get gas. Not only did she get gas. She got the full ‘old time’ service: Windows washed, oil checked, tires checked, all at no extra price. Seems to me gas was around 39 cents a gallon! Mother also usually got the car washed there. They did not like washing Dad’s truck because it was so full of mud. Both Steve and Warney were wonderful men, and treated us so kindly. They later moved to Grantley Road, aside of what was at that time Weaver’s Meat Store, later a pizza place.”

Bill Landes added, “Betsy is right on. Steve Kranich took care of our cars for years on Grantley and I’m sure he knew my dad who lived at 434 W Market.”

Ron Zinn wrote, “Before Steve and Warney’s there was Gerry Blouse who built and opened the Gulf station in the mid ’40s. Before that was M&H Grocery store with a large canopy across the front out to the curb, and also 3 houses on Penn St. Store and homes were torn down to build the Gulf station. Gerry Blouse and his brothers Bill, Henry and dad Amos ran the station until Steve Kranich and Gerald Warnecke (sp?) took over in the late ’40s or 1950. I worked for both part-time while going to school. I also worked on the point at Salem and King at Bill Shaw’s Atlantic station, later run by Warren Uffelman.”

Of some of the other businesses mentioned in that earlier column, Scott C. added that he also did not remember a bookstore in the Queensgate Shopping Center; Ann at the Martin Library reference desk notes that Little Professor Book Center is listed in the 1990 Verizon phone book for York as being in the Queensgate Shopping Center; so, it was there even in rather recent years!