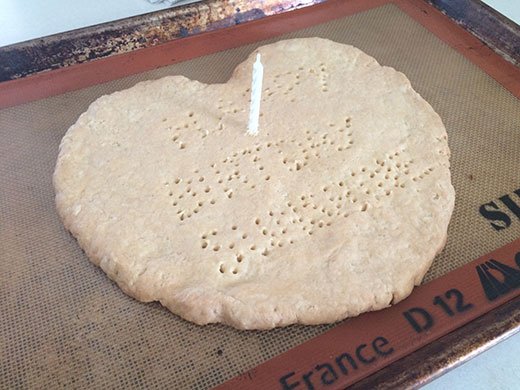 Last weekend, I celebrated my 32nd birthday. In our family, we have a tradition: I don’t like cake, but I love pie crust.

So my mom makes me a birthday pie crust; we put a candle in it; and I eat the whole thing. I love my mom. And her pie crust. And now it’s all gone.

1. I recently came across a recipe for (fastnachts) in a York 1741-1966 Cookbook. The recipe was submitted by Robert K. Yohe, York, Pa. Do any of your readers have any information about the origins of this recipe or about Mr. Yohe? Thanks.
– Paulette Gunnet Parquette

I’d be very interested to know more about this recipe and Mr. Yohe. I’m pretty sure I know the book Paulette means – this spiral-bound yellow cookbook, which I’ve come across at a couple of sales but never picked up. (Now much to my dismay!)

Any info would be greatly appreciated!

2. A couple weeks ago, I shared a question from Greg Moul, who wanted to know more about the history of the YESCO building in North York, which is now being turned into apartments.

I heard from reader John McDonald Jr., who says the YESCO building was previously York Tent & Awning, which is still in business in North York, now on East Seventh Avenue.

The City View Lofts at 815 N. George St. that Greg mentioned can be seen here; according to their website, they were also formerly a car dealership and storage facility for Wolfgang chocolate!

3. In the late ’50s, early ’60s, the Overbrook Cafe was known as Pudd’s… they had the best crab cakes. They came between two saltine crackers. Do you or anyone know if they still make them; if not does anyone have the recipe?
– John Albright

We’ve talked about crab cakes a lot lately, and where readers remember eating them. Any details on the Pudd’s crab cake recipe for John?