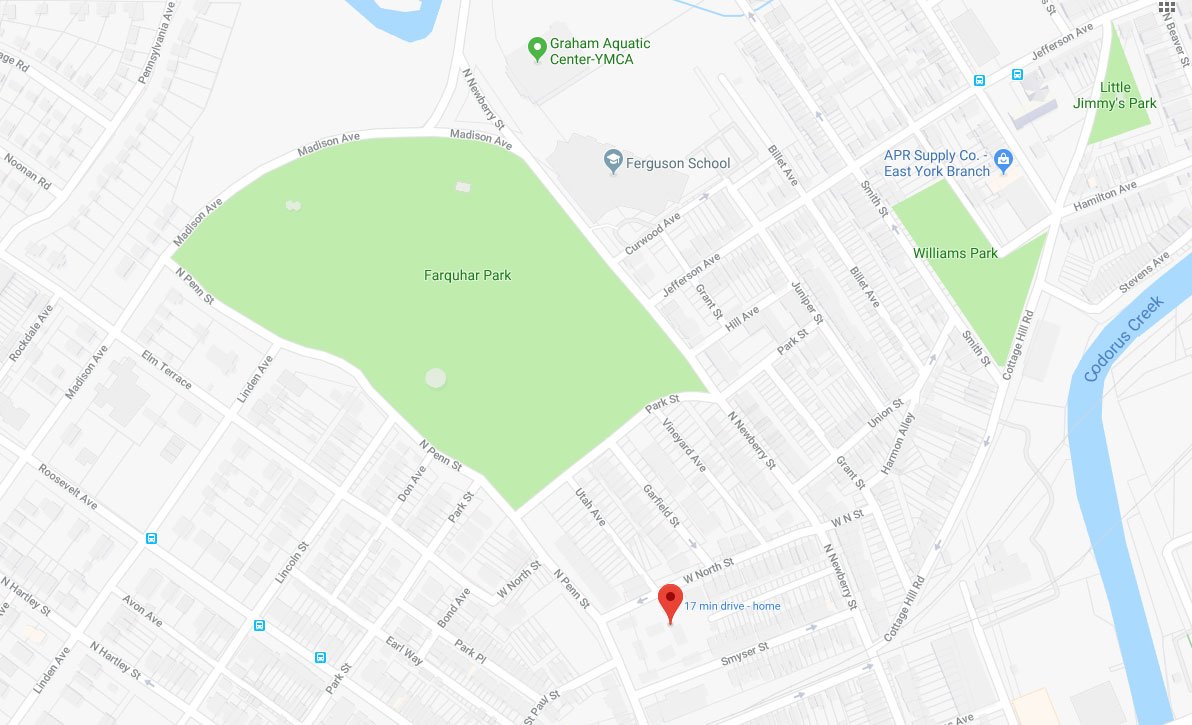 This map shows where the former Garfield School and the current Ferguson School are in York, PA. Garfield is marked by the red pin, and Ferguson is above it and to the right.
Posted by Joan ConcilioJuly 1, 2018July 23, 2018 Ask Joan, Local memories, York City/SuburbanNo Comments

I’ve focused more recently on following up on previous columns, so today I thought it might be nice to field some new questions.

Reader Craig writes that he used to drive a truck for a furniture store on East Market Street in the late 1960s. It was east of Newberry Street, on the north side of the street. “Can’t remember the name of it,” he said. “Can you help me out?”

Craig, I have to admit your question confused me a little, because just east of Newberry Street would still be West, not East, Market Street. On East market, I know there was Sleeger Furniture, and on West, the was H.H. Haugh. Not sure if either of those rings a bell, but hopefully it’s a start!

2. Any details on former school?

Another reader, Greg, wrote that he lived on Park Place in York around 1958 or so. “There was a school nearby, I think it was Garfield Elementary?” he said. “Then we went to the brand-new Ferguson school on the other side of Farquhar Park. I cannot find anything about that old school.”

He concluded, “I’ll date myself, but the rail yard behind still used steam locomotives for switch engines.”

Greg, I hope we can get you some more information on Garfield School. I don’t have many details – for instance, I know it was in operation during World War II, but not when it opened or closed.

You can see both locations on the map with today’s column: Garfield sat just below Garfield Street and is marked by a red pin, and the newer Ferguson Elementary is marked above it and to the right.

Beyond that, Greg, I have few details! If any readers have info to share on Garfield School, please do let us know.

Reader Stuart writes that he wants to know what drive-in was on Memory Lane across from Eastern Market in the late 1960s. I couldn’t place one there exactly – we’ve talked in the past about Hickey’s, which was on East Market Street slightly farther east, and Ernie McCall’s North Pole, which was on Sherman Street near where Route 30 and Sherman intersect now, and Melvin’s, which was first at the area near where I-83 crosses East Market Street and later moved out to the Village Green Shopping Center.

There was The Dog House at Memory Lane and East Market (so still not exactly in the right area, and I don’t believe a drive-in)… but I can’t quite pin down what eatery Stuart is recalling. Any information would be great!

We have talked about many “tops” in the past – including the Cherry Top and the Orange Top – but in very little detail except to mention that they existed. So, as with the other questions this week, I would love to hear from you if you remember the Cherry Top!