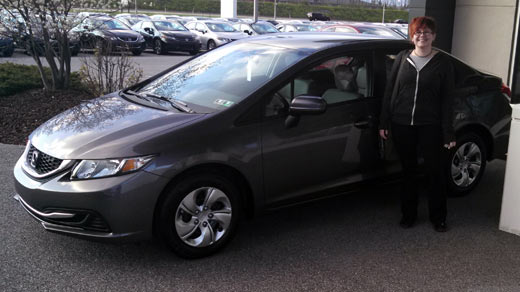 Yep, that happened yesterday. I’m now the proud owner of a brand-new (as in, only 8 miles on it) 2014 Honda Civic, thanks to Tanya Healy at Apple Honda. I don’t get anything for saying so, but it was as good as the experience of buying a new car – when you REALLY didn’t want to – could possibly be.

Also, in true Only in York County fashion, I know Tanya because she sold my best friend his car, and two of my coworkers THEIR car, and the assistant manager of the car wash at Apple is a guy I’ve studied martial arts with off and on since I was in elementary school.

Joan, my brother and I have a difference of memory. The Belmont Pharmacy, in the ’50s through ’70s maybe even ’80s, it was at 15 S. Belmont St. Spring Garden Twp. Did it ever have a soda fountain? Owner/pharmacist was Ben Lavitan.
– Steve Bancroft

Sometime in the 1970s a reunion was held in the band shelter at Farquhar Park of “kids” who had lived on the 400 & 500 blocks of Madison & Pennsylvania Avenues & the 600 block of Roosevelt Avenue in the 1930s & 1940s. Who organized the reunion? Who are the people on the pictures? We would like to contact anyone who was at the reunion. Call Dick Wilson at 717-764-2776.
– Gloria Aughenbaugh (and Dick Wilson)

When Gloria wrote, she said she and Dick are hoping some people will respond. They know some who attended might have since passed away but are interested in hearing from anyone who was there!

Years ago we would frequently purchased Apple Pan Dowdy from Jay’s Supermarket Bakery. Does anyone have the recipe for this? Thanks.
– Nancy Rudisill

So, I thought this was a great question to share because I just fielded one a couple weeks ago about a Jay’s lemon sponge pie recipe, which netted me something like 12 different lemon-sponge recipes including one from a former Jay’s cook that I’ll be publishing in a future post!

So that makes me think someone can help with an Apple Pan Dowdy recipe for Nancy, specifically the Jay’s version!