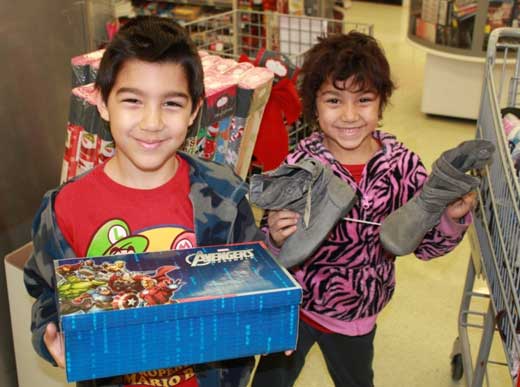 Earlier this month, Jack Bupp had asked about the “Hide the Line” Christmas tradition.

Ron Thomas was quick to respond. “‘Hide the Line’ was a yearly project of the York Jaycees,” he said. “I actually ran the project one year when I was in the York Jaycees. We would set up a wide tape line at several locations in the York area and ring bells and ask people to place money on the line and try to cover it. The money raised was used to take underprivileged children from the York area Christmas shopping for themselves and their families. The years that I was involved, we took the children to McCrory’s before they were open and helped them shop. Then we helped them wrap the gifts, had lunch and took the children back home. What a rewarding experience!”

Jim Fahringer remembered several groups using this fundraiser method, not just around Christmas but in the summer and fall as well. He recalls, “I believe the Lions Club in Springettsbury Township also did this sort of thing. I remember that on several occasions this was done at the York County Shopping Center. It was done on a white painted or taped line under the canopy on the side walk that connected Sears with the Acme Store in the northwest corner of the York County Shopping Center. The idea was to get enough contributions of dollars and coins to completely cover the line so that you could no longer see any of the white of the line. The events that I remember used a line about as wide as the white highway and parking lines in a parking lot. If it was a little windy you had to put silver and copper coins on top of the dollar bills to keep them from blowing away. It was a fun way to raise funds for special charitable projects.”

One of our correspondents, Barb Krebs, also reminded me that last year, she’d written a story including many Hide the Line and other county Christmas memories – you can read that here!

And most importantly, I received a great note about how this tradition continues today – and how you can help!

Carrie Reich of the York Jaycees writes, “I’m not old enough to remember when Hide the Line was in downtown York (although I could connect you with a couple people who were part of it back then), but I wanted to let you and readers know that the project is still going strong, although it has changed a bit. I’ve been a York Jaycee for about eight years now and in that time, the project has taken place at KMart on Haines Road in East York – where they graciously give us space to collect donations for two weekends to help fund the project. We modified the line on the ground to a ribbon placed on a table, but it didn’t quite have the same effect, so we have renamed the project ‘Holiday Hope.'”

She continues, “The York Jaycees (Part of the United States Junior Chamber) just held this year’s project on Saturday, December 15th. We collected donations at KMart on Black Friday, that Saturday and Sunday and the following Saturday and Sunday. Then, we get names of families in need from local organizations like Big Brothers Big Sisters, Habitat for Humanity, and The Lehman Center. Those families meet us at KMart early on a Saturday morning and we have Jaycees (and friends and family) who take the children shopping for winter clothing, coats, boots, underwear, etc. – whatever they need. We are usually able to spend around $100 on each child or teen and KMart generously gives us a discount on any items that aren’t already on sale, so our money can go a long way.” 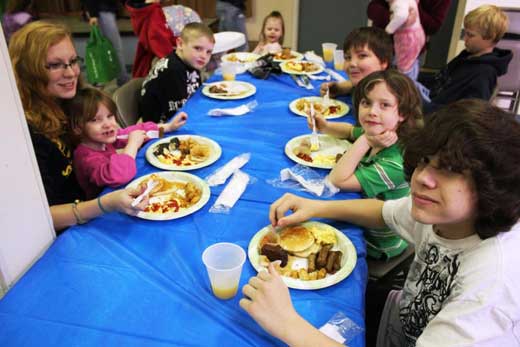 And, Carrie adds, “The families are then invited up Haines Road to Eastminster Presbyterian Church for a pancake breakfast with Santa. York Traditions Bank collects donations of food items and toys which enables us to give each child a couple of toys and send the families home with bags of food. The York Jaycees are grateful for our community partners who help us give these families both necessities and few fun things during the holiday season. This year the Victory Athletic Club also gave us a sizable donation that allowed us to almost double the number of children we shopped for.”

The photos with today’s post show some of the recent families to benefit from the shopping trips and the breakfast. I was so thrilled that Carrie shared all this!

How you can help
I would love to think that those who remember this effort in its past forms would work together to make the next “Holiday Hope” one of the strongest ever!

Carrie says you can plan to look for the Jaycees at KMart on Black Friday, that Saturday and Sunday, and the following Saturday and Sunday. “We sit by the exit to collect money,” she said, and adds that Charlie Burnside (a former Jaycee) donates Maple Donuts to the group to hand out to the weary Black Friday shoppers, too.

She added, “I think it’s safe to count on York Traditions Bank continuing to collect food and toy donations for the project next year in November/early December.”

Finally, it’s not too early to send a donation! You can mail those to The York Jaycees, PO Box 1965, York PA 17405. If you mark it “Holiday Hope,” Carrie says they’ll be sure it goes to fund that project.