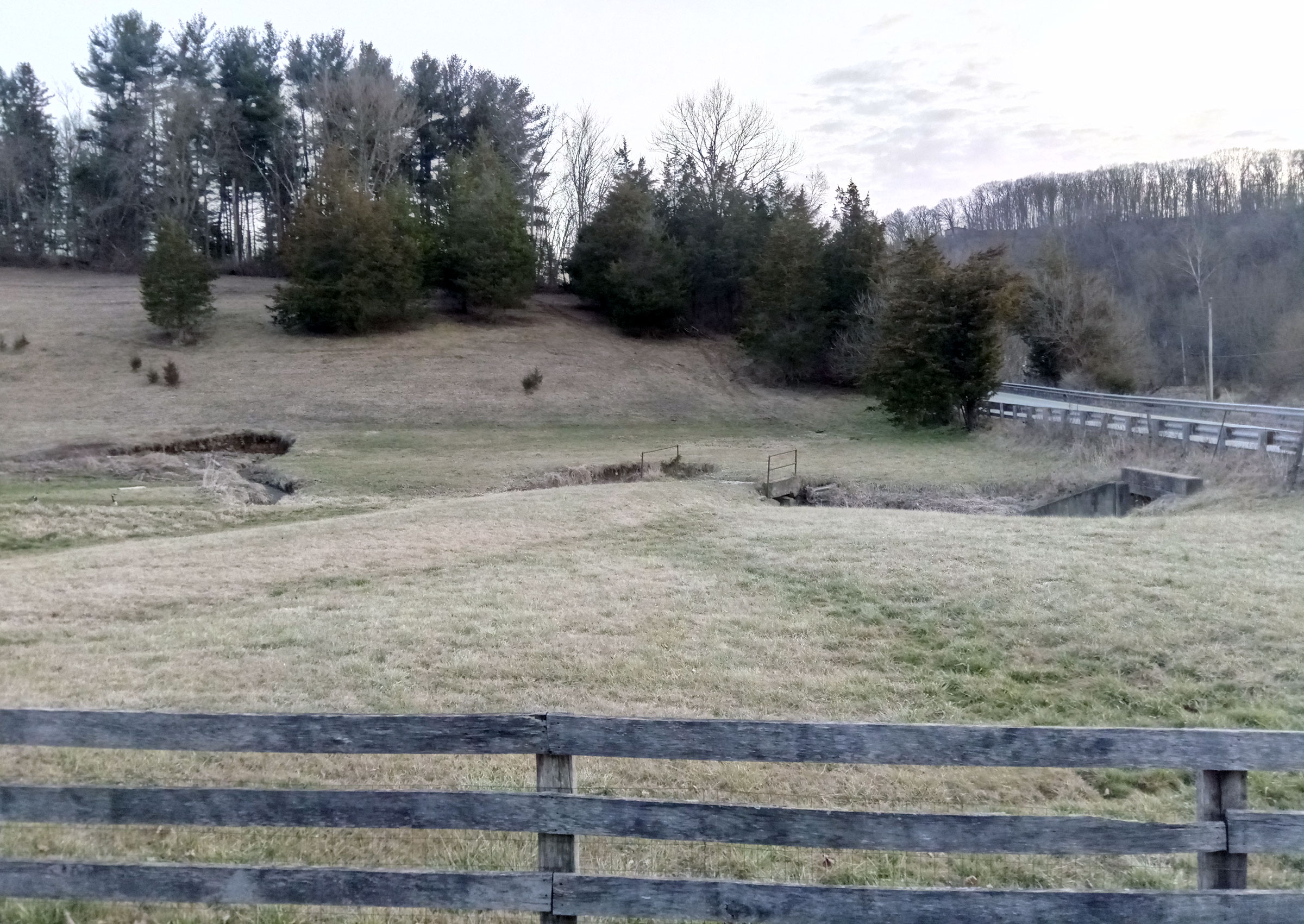 Ricka Patterson shared this photo of the small Godfrey Bridge in North Hopewell Township, as seen from Myers School Road near the intersection with Swamp Road.
Posted by Joan ConcilioJanuary 15, 2021January 21, 2021 Other3 Comments

Back in the fall, I shared another installment of my occasional Names of York series, which talks about the people for whom local places were named and other fun name origins.

Today, I have even more, some in follow-up to that column and others touching on topics from a while ago!

In February last year, I shared a photo and memories from the Rev. Arthur S. Zeigler of York, who was writing about a small North Hopewell Township bridge built in 1918 by J.A. Godfrey, a local farmer.

Reader Virginia Lease wrote in response and noted she saw the photo of the small bridge along Swamp Road in North Hopewell Township. She wondered about J.A. Godfrey, its builder, “Could this have been the old gentleman they called ‘Alley’ Godfrey? He had 15 children, one of whom was married to my cousin (both deceased).”

I don’t know, but it certainly seems possible, Virginia!

Meanwhile, I also heard from Ricka Patterson, a retired music teacher who I met a couple of years ago at a meeting of the York County Chapter of the Pennsylvania Association of School Retirees. She was familiar with the Godfrey Bridge area, noting that she has ancestors who’d attended Miller School in North Hopewell Township, near Winterstown.

She was even kind enough to take a drive past this bridge on a Sunday last year so she could take pictures for her second cousin in Missouri, who is actually who originally saw the column about the bridge and shared it with her!

You can see those photos today, and for anyone else looking for a nice drive, she notes, “The Godfrey Bridge is in the pasture on the corner of Swamp Road and Myers School Road. Enjoy!”

Another letter I received in the past year or so was from Raymond Hovis, who was actually primarily writing about Jessop’s School, the schoolhouse on what is now the property of Apple Hill Medical Center. As he finished that letter, Raymond wrote, “A couple of miles to the south, at the top of the hill, is “Leader’s Height.” The name has undergone some change over the years, but the original name was as stated above. My great-grandfather, George M . Leader, had a sign painted on the south side of his barn using those words. Many years later, my uncle and law partner, Henry B. Leader, had the sign removed and refurbished and gave it to his brother, Governor George M. Leader II, as a present. The sign is now located on a barn presently owned by George’s son, Mike, who has the same name as his father.”

You can see that photo with today’s column as well, and I am so grateful to you for sharing it, Raymond!

For those who aren’t aware, in all official capacities, this area of York Township is now styled Leader Heights, thanks to a 2007 decision by the township commissioners that I wrote about in 2014. (That was done to stay in keeping with PennDOT maps from 1976 forward.)

But, as Raymond notes, it was in fact originally “Leader’s Height,” dating back to the 1920s or so. This is a story I love sharing because there are so many people who are adamant that it’s “always” been some way or another, and in fact, as is usually the case with the “history mysteries” I track down, the answer is “a little of column A, a little of column B!”

A few years ago, my good friend Jennell Moser was talking to an older York Countian who recalled an area between Red Lion and Dallastown that he called The Flats. She and I had been wondering if anyone knew about the area, but I didn’t hear much.

Then, though, I got a letter from reader Mike Kehr, who wrote, “The Flats is the quarter-mile straight stretch of road that extends from Locust Hill Road just west of Dallastown to the crest of the hill just before the Honey Valley Road intersection.”

He noted, “In the late 1950s, when I was a teenager with a freshly minted driver’s license in my pocket, traffic was lighter and the entire stretch was a passing lane. It was a place where I and my friends would floor the accelerator and see how fast we could go. We knew it as The Gable Flats.”

Now, see, that’s where we get into a real “Names of York” situation. Why Gable Flats? Was the land near there owned by a family named Gable, maybe? I’d love to know more!

Finally for today comes the oldest follow-up I’ve had in a while. No, not the oldest languishing letter or email I’ve received; this note, from Ruth Wolfe, only came my way in late November 2020.

The past column Ruth was commenting on, though, was from much earlier – August 2010, to be exact! In that piece, one of the original Names of York series, I mentioned William Wells Young Memorial School in the Northern York County School District, a lovely stone building built in 1907. William, who died from diphtheria as a child, was the grandson of the founder of the town of Wellsville – Abraham Wells, hence the name.

As of about 2007, I could find record that the building was still being used by the school district as a music room and kindergarten classroom, but, I mentioned in my 2010 column, I couldn’t figure out what, if anything, was happening with it at the time.

Well, I just had to be patient! Ruth wrote in November of last year that the building was just sold to private individuals. “Rumors are it may become a bed and breakfast, I don’t know for sure,” she wrote.

I don’t know either, but I will certainly be waiting to see what happens!

3 comments on “Ask Joan: More about names around York County”