Ask Joan: Lots to do this weekend edition 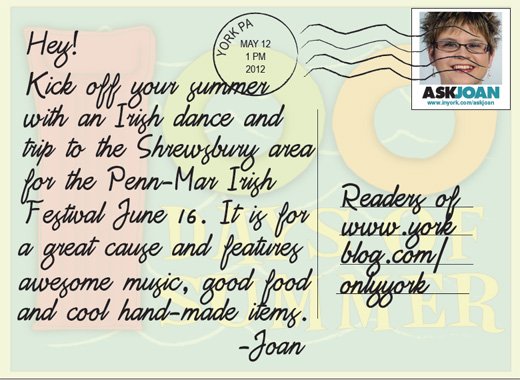 This will be a crazy-busy weekend for us – and hopefully I’ll see some readers while out and about!

In addition to the “postcard” above, in which I invite you to hang out with us at the Penn-Mar Irish Festival (that was created, by the way, as part of our 100 Days of Summer guide), we’ll also be out at the York Post Card Club’s show at the Holiday Inn here in West Manchester Township and the Sci-Fi Saturday event at the York Emporium (complete with Jedi!)

Please come check those out – and say hi if you see me!

In addition to those public events, we’re also hitting a couple private gatherings for friends – a huge black-belt test at our martial-arts school, Dover Dragons, as well as a hibachi birthday party for one of my good friends.

Sunday will be quiet – luckily!

1. Where are the best places to purchase Texas Hot Weiners?
– Donald Hall

Well, I know LOTS of places that sell “Texas Hots,” but I don’t know if I can vote for the best – as I prefer a simple ketchup-and-mustard dog.

I’ve personally eaten at both and liked their dogs in general; Chris sometimes eats Texas Hots and has tried them at both those places as well.

But I’m sure there are some more off-the-beaten-path options too, so if anyone has a suggestion for Donald, please do leave a comment!

2. In (a previous edition of the York Sunday News), I read about the Civil Air Patrol. In approximately 1950 my father bought the air patrol building that was on top of the hill before entering Stewartstown. At this time I was about 15 years old. Dad had an old Ford truck that he used to haul wood to Certainteed Roofing (Roosevelt Ave, York) and to P.H. Gladfelter (Spring Grove). He jacked up the Air Patrol building, loaded it on his truck and hauled it to Warrington Towmship (northern York Co). I remember when we left the building site we went to Glen Rock, then to Seven Valleys since the building was too high for the underpass in Seven Valleys. From there to York New Salem and on to Dover. I had a long pole that I used to hold up wire so Dad could drive under. I would be greatly interested in any additional information about the building or its use.
– Roy Conley

Roy, that is an AMAZING story! I’ve been trying to find more info on the building, but without much luck. So I’m turning this over to the county at large – any ideas for Roy? I’d love to be able to expand even more on his memories!

3. Does anyone have a picture of the old United Dye at end of Mount Rose Ave. next to York Water Co.?
– Richard

You’ve probably driven past this area many times and never thought much about it – at least I know I have! It’s right near the I-83/Mount Rose intersection, and it’s not open to the public now. But United Dye was a large company in its day, and I believe later became Chem Oil if I recall correctly?

So, knowing that, I’m hoping maybe someone will have a photo to share! If you do, feel free to email it to me at jconcilio@ydr.com and I’ll share!