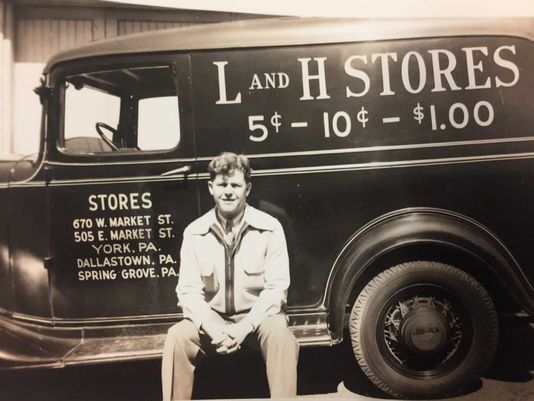 Ask Joan: Looking back on Mr. Lookingbill’s life, and more

This week’s Ask Joan is a “more on” column. (No comments from the peanut gallery about me being a moron…!) Nope, that means it’s “more on” some topics we’ve talked about in the past, which I’ve received further information about. I hope you’ll enjoy!

In recent weeks, we’d been talking about L&H 5 and 10, in honor of the 100th birthday of owner Philip Lookingbill in November.

In case you missed it, I wanted to highlight a great piece, including video, about Mr. Lookingbill, by the YDR’s Mike Argento. You can read that at goo.gl/LPVh6U.

I’ve also received even more L&H memories that I wanted to share, as well as some thoughts on Mr. Lookingbill himself.

Cindy Roach wrote, “I am writing on behalf of my Mother, Dolores Diehl, who saw your article on the L&H 5 and 10 stores… My mom read the article and told me that she and her mother, Ruth Miller, walked to the 5 and 10 store many times. Before the store on West Market Street and South Belvedere Street, Mr. Lookingbill had a store on East Market Street. Traveling east it was located on the left side between North Franklin and Sherman streets. My mother and grandma would walk to Phil’s store on a Saturday afternoon and they always went in the back door because they were coming from York Street. My grandma had a neighbor, Mrs. Gosnell, who was a clerk at the 5 and 10 and if they were not busy, Grandma and Mrs. Gosnell would chat.”

She continued, “My mom said that she always bought Buster Brown white cotton anklets at the 5 and 10. She said that Phil had items in the store that you couldn’t find in other stores. I just wanted to let you know that the article on Phil Lookingbill’s 5 and 10 store brought back a lot of memories for my mom.”

Meanwhile, reader Bill Heindel wrote, “I remember the L&H 5 and 10 store at the corner of West Market and Belvedere because back in the 1950s my grandmother worked there. I think she worked at the candy counter. Her name was Edna Sprenkle. She mentioned Phil and a Mr. Hellerman. I think he was the ‘H’ in L&H. I think I remember that one of the other ladies who worked there was named Della.”

Bill, thank you for sharing that! I was waiting for your note to say that Mrs. Gosnell from Cindy’s mom’s story was your grandmother, just because that would be a very York County thing to have happen.

Meanwhile, Bertha “Bert” Evans wrote about Mr. Lookingbill himself, noting that they are both residents at Country Meadows of Leader Heights. She said, “I am about 95, but I have admired Phil ever since he came three years ago. He lives independently and takes perfect care of himself in addition to having a permanent smile on his face. On Sunday morning he dresses in perfect attire, white shirt and tie and dress suit and is picked up early to go to church. I can’t see how he does it.” She also is the one who mentioned to me that the YDR was planning to interview Mr. Lookingbill, which was funny and awesome. She added that there was a dinner set for his birthday on Nov. 26, and updated previous information by adding that he owned four stores, two in downtown York and two others. “A remarkable man!” Bert wrote.

Finally, for today, I have a note from Grace Brant of the New Salem area. She wrote, “Regarding the L&H on Market and Belvidere, my sister and neighboring kids (we lived about five blocks away) loved to stop there after the movies at the Hiway Theatre. On Saturday mornings I would go the grocery store for a neighbor and bring back lunch food for her and her husband who worked Saturdays as a plumber. For that errand she paid me 25 cents. The movie cost 14 cents. After to movies and using the remaining 11 cents I would go the ‘First 5 and 10’ and buy goodies. Perhaps it would be paper dolls, a set of jacks or similar little treats. For a poor kid this was just wonderful! The ’50s were absolutely the best of time to grow up!”

Grace also had a couple of “more about” comments to share about other past column topics, so I wanted to make sure I mentioned those today too. She said she’d intended to write to me about The Cove and LoPiccolo’s, but then said that her classmate from York High’s Class of 1954, William Hoffmeyer, beat her to it. “His reply was spot on,” she wrote. “I would go to the Trail Coffee shop with friends in the mid ’50s to have tea and perhaps a late-night snack. It was extremely popular and the ‘in’ place to go.”

And, she concluded, “Bill will remember – and many others – Mick McCord,” who she described as a huge York High fan and supporter. “LoPiccolo’s was one of Mick’s hangouts. It was an excellent place to get an authentic Italian dinner,” she added.

Finally, she wrote, “Regarding schnitz and knepp, I was never a fan. However give me some sauerkraut and knepp and I’m a happy camper. My siblings, my grown children and my husband all love it. We make our own sauerkraut so I frequently make it with knepp for a hardy cold weather comfort dinner.”

I’m not a sauerkraut fan AT ALL – cabbage and I don’t get along – but I’m glad to know the knepp finds another use even if you don’t like the apple schnitz!

We had been talking off and on about a 1957 accidental bazooka explosion in Dover Township that killed four boys, two brothers from the Weaver family and two brothers from the Baker family. Today is probably the last time I will be writing about that topic, because it is a painful one to those involved, but I did receive three notes from members of the Weaver family, and I wanted to be able to share their stories.

Michael Weaver wrote and added, “The mother of the two Weaver boys has just turned 100 years old. There are still two sisters living to the boys. My father (deceased) was the brother in the Army at the time. Although the boys were mentioned a lot as I grew up, the actual events the day of the incident were never talked about. Would be interested in also learning more about what happened the day my two great-uncles died.”

I also heard from Mitchell J. Weaver, who, like Michael, is a grandson to the woman whose sons died, said his grandmother “remembers vivid details of the tragic loss of her sons,” and added that this August marked the 60th anniversary of the event.

But what brought tears to my eyes was a letter from Meg Cardino, who wrote to me just before Thanksgiving. She said, “As I sit here holding my 8-month-old son trying to comfort him as he is sick, I’m scrolling through Facebook and see multiple family members of mine from the Lancaster-York area sharing your article regarding the bazooka that exploded on a farm in Dover. I’m writing to tell you that that was my family. Two of those boys are my great uncles. They are my grandmother and great-aunt’s two younger brothers. I’ll never forget the first time my grandmother told me the whole story of what happened. I cried for hours imaging the pain she and my great-grandmother (who by the way just celebrated her 100th birthday this year) felt. You see, my grandmother is the most fantastic woman you would ever meet. She’s strong, faithful and despite experiencing this tragic event she’s the most beautiful soul in the world. I am so grateful to have had her as a role model growing up. I would not be who I am without her.”

Meg’s note is exactly the way I want to end our discussion about the tragedy that took the lives of the Weaver and Baker boys 60 years ago. I cannot imagine losing my daughter, let alone two children at once, and I am sorry beyond words that this happened, but so glad to know more about the amazing people who remain to share their memories.