This week has been rough – we’re having a problem with our air conditioner at home, but more worrisome, our oldest cat, Salem, is pretty sick. He’s been at the vet since Sunday, and he’ll be there til at least Friday. I’ll be honest; when he comes home, I’m not sure how much time he’ll have left.

I try to keep things pretty happy here as it relates to telling you what’s up with my life in York County, and I do have a slightly fun story to tell – I’ve gone to visit Salem a few times, and in the next cage to him is a lovely cat called Skittles, belonging to one my middle-school teachers and his wife! Very York County. So send good thoughts for Salem and Skittles, OK? And if you want to help me answer some questions, I’ve got a few I could use a hand with! 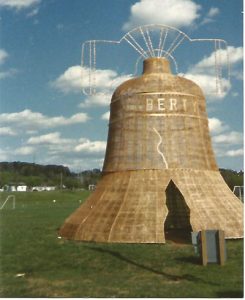 1. Last week I’d asked on behalf of longtime reader and family friend Gene Rank if anyone knew where this model of the Liberty Bell might be found.

I got an answer quickly – it turns out it’s the Liberty Bell replica at Patriot Park in Pigeon Forge, Tennessee. You can see more photos of it here!

Many thanks to reader Elaine Corwin for very quickly identifying that! Gene, if you visit, let us know if it’s a fun trip!

2. This is maybe a long shot, but through one of our side jobs, our family has come in contact with a gentleman from the area who would like to get copies of the Dover Area High School yearbooks from 1966, 1967, 1968 and 1969, and the York Vo-Tech yearbook from 1969 to 1970. His were lost in a fire some time ago, and he’s looking to replace them. I’ve been checking local used bookstores like the York Emporium, and somehow haven’t come across these particular ones, but if anyone has them, is willing to part with them, and could be in touch with me, I would love to be able to help.

3. Reader Larry Bryan writes, “I recently purchased a very large double sided sign with WASHINGTON HOUSE written on both sides. The tag that was on it said York Co. PA. It was possibly for a Tavern, Restaurant, etc. Do you know if such place existed?”

There is a reference to a Washington House in John Gibson’s history of York County, published in 1886, in a section on inns, taverns and hotels; from the USGenWeb Archives:

“The Washington House, on East Market, has been well known to the traveling public for half a century. Daniel Webster, Henry Clay, Presidents Zachary Taylor and Andrew Johnson stopped at it. It was formerly kept by John Koons. For many years it was fashionable for city people during the summer. James Kindig kept it for many years. It is now kept by Mr. Wilhelm.”

Any other Washington House information? Please comment and let us know!