Hope your Labor Day included relaxing times and dry basements. Wear your galoshes the rest of the week; I hear the rain will continue. In that spirit, today’s Ask Joan also features some continuations, following up on previous posts. Hopefully these will be of a bit more cheery sort than the weather!

1. In an Ask Joan that originally ran way back in April, Sylvia Lee asked if anyone else remembered the Pine Tree Inn on West Market Street. We shared some such memories in this May post, and then I received a letter with yet another memory that was too cool not to share.

Audrey Miller of Lower Windsor Township writes, “I remember the Pine Tree Inn because that is where my wedding reception was held. I don’t remember about it being so elaborate, but it was a very nice place and that is why I had my reception there. My husband and I just observed our anniversary on May 19th of this year – 60 years.” She said they celebrated at Dallastown Nursing Center, where her husband is a resident. “We had a room all to ourselves with the kids and his brother and his wife there. We had cake, ice cream, and coffee and took pictures. It was all very nice.”

Audrey, it was very nice of you to share your wedding and anniversary memories with us! Thank you. And thanks to all who shared about the Pine Tree Inn; I hope our original “rememberer,” Sylvia, has enjoyed the thoughts.

2. In another question from April, Iline Glatfelter asked about the Green Frog, and we talked about that more in May, too, in this post and this one. 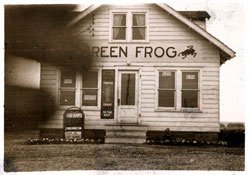 That’s another subject I continue to receive mail about. Sarah Elicker of Dover Township wrote, “My brother in law bought the building next to the band hall in the 1960s … I remembered him saying years ago it used to be a bar. Years ago when he bought it for his family residence – he found the neon Green Frog sign in one of the upstairs bedrooms, but it was broken so he threw it out and tore about 25 feet off of what would have been the dance floor area. When I read your article, I called him to verify it. He still lives there yet.”

Well, that became interesting, because I heard from a caller whose father-in-law still lives in that house, assumably Sarah’s brother-in-law! The caller, Ray Loveland, said his father-in-law, Gary Smith, told him stories about the business formerly being an inn; the rumor was that the owners would take money and bury it in jars in the yard; Gary has dug all over but never found any!

Thank you both for sharing your family’s stories. How cool that we’ve been able to find out so much based on the old picture Iline was able to find!

3. In June’s “trivia challenge” Ask Joan edition, Robert Finke of North Codorus Township asked about how Hyde along the Heritage Rail Trail got its name.

Fellow blogger and longtime commenter Blake Stough writes, “I believe I can shed some light on the naming of Hyde along the Heritage Rail Trail. Along Indian Rock Dam Road (Rt. 182), the one that does NOT cross over the actual dam, was a Hyde family farm. It was located where the road abruptly crosses over the railroad tracks. This farm sits right beside this crossing. Several years ago while volunteering at the York County History Center Library, I met a group of ladies from Ohio who were in town researching the Hyde family (also spelled Heyd, Hide). This family married into an early Stough line I am researching. As I recall, these ladies sought out several local family properties, and the one mentioned above was one of them. They even talked to the owners, who had late 1800 to early 1900s photos of the farm and residents. The Ohio ladies were given copies of the photos, who in turn supplied me with copies as well. We corresponded for quite some time about the family. So, while not EXACTLY at the same location as the Hyde listed on the Rail Trail map, this farm is merely a stone’s throw away. I am most certain this is where the Hyde name came from.”

I had mentioned in my earlier post that there was a Hyde stop on the Ma & Pa railroad. But commenter Philip Kehr points out that while that’s true, it’s not “this” Hyde; the one I’d seen was in Maryland, at some point between Glenarm and Fallston, not up in Pennsylvania. My apologies!

Finally, I got an unsigned postcard from a reader who writes, “I’m surprised no one mentioned Hide’s Schoolhouse at the top of the RR tunnel as the Lover’s Lane of the 1930s on Day’s Mill. Swimming hole nearby until the flood of ’33.” To my anonymous postcard-writer, thank you for sharing that; I appreciate one-room schoolhouse memories in particular very much!