I’ve said before that I get a lot of NEW Ask Joan questions each week. As I try to get better and better at keeping up with those, now I’ve run into the problem of follow-ups or answers to previously shared questions languishing. Today, I’m attempting to get word out on some answers I received some time ago to readers’ questions!

1. Way back in November 2011, reader Kim Whiteley shared a clip she found from a newsletter about Peace Child York in this Ask Joan column. She wondered what had become of the organization and if anyone recalled it. MANY did, as it turned out! 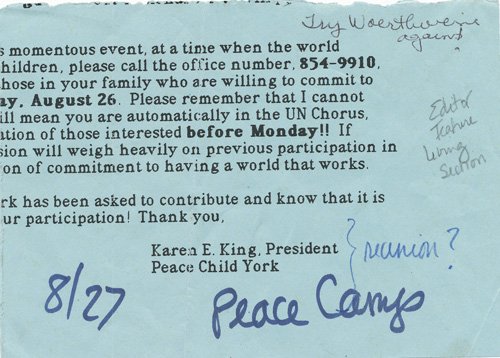 Of it, Jenna Seeley wrote, “I’m responding to your article … regarding Peace Child York info (my sister just mailed me the article). There is a yahoo group for Peace Child alumni at http://groups.yahoo.com/group/peace_child_alumni/ – hope this helps.”

Jim Smoker said, “Bill Schintz was a key person who helped to organize Peace Child in York and Bill probably has more insight into the early founders and Peace Child’s history. The ending of the Cold War brought about the demise of Peace Child as an international organization. Many of the young people who participated on Peace Child exchange tours still communicate with each other. There was a US reunion of Peace Child participants about six years ago in Washington, D.C.”

Well, speaking of Bill Schintz, he wrote as well! He said, “British filmaker David Woollcombe and York photographer Bill Schintz brought the play Peace Child to York in the early 1980s. The first production involved children from the Catholic grade schools. Two years later a much larger production was presented with an international cast. ABC, Good Morning America did a special segment on the York event. Peace Child York continued for several years with more productions, Peace Camp and A Day at the UN. Two years ago a 25 year celebration was held in Washington. David and Rosie Woollcombe still head the group and can be found on the website Peace Child International. Singer John Denver and actress Susanna York were involved with the group.”

And finally, I heard from Priscilla Hoffmann, who wrote, “Yes, Peace Child still exists. David Woollcombe from England who is the creator of the non-profit group still works to ensure that our children are safe in many ways. There was a reunion of past cast members, several years ago in Canada. I am still in touch with the musical director of the program, Steve Rifkin, who lives in San Francisco.”

Many thanks to all of you!

2. Also way back in 2011, I shared a question about a murder from the 1970s in Hanover. Donna Smith, who originally wrote, simply wanted to know more about the case and some of its particulars.

John Krepps wrote, “Regarding the girl whose body was found near Barnhart’s store in Hanover: Her name was Holly Carbaugh; she was the sister of Phil Carbaugh, who was a grade school classmate of mine at St. Joseph’s grade school in Hanover. If I recall correctly, there were three boys in the family and Holly was the only girl. Phil, my schoolmate, was the oldest sibling. They were all good looking kids and all had golden blonde hair. At that time the family lived on Hammond Ave., near Park Hills elementary school, and only a few blocks from Barnhart’s store. When I was a kid I would go to their house and play baseball with her brother. We often rode our bikes to Barnhart’s store to buy candy.”

John’s recollection was that Holly had walked to Barnhart’s store (no longer in existence) from her family’s home, and was walking back either in or near a small cornfield, where she was attacked and killed. He adds, “That incident still has an impact on me; almost anytime I drive by that area, I cannot help but think about it. I drove by that area a few days ago. It looks like there is an apartment building constructed on the area where Holly was killed.”

Christine Forrest also remembered Holly, who attended South Western High School with her in the late 1970s; Holly would have been a member of the class of 1980, and died Nov. 2, 1979. Accounts at the time said her body was found four days later, in a nearby garden. The owner of the house discovered her body while he was outside doing some work in the garden.

Christine shared this Nov. 21, 1979, Gettysburg Times article about the case (and a suspect, George Bane, being held for trial) and wrote, “What I remember most was that her mother died shortly before she did, and that at first, we thought she might have just been overwhelmed and ran away. After her body was found, everyone was on edge until (a suspect) was arrested. I was 18 years old, and I remember that incident being the first time it occurred to me that our little town might not be so safe, after all… and I was afraid.”

Another classmate of Holly’s, a friend named Kim, remembered some of the same details, as did reader Sharon Vastola, whose daughter was in Holly’s geometry class, and Caroyln Stauffer, who knew Holly and her family quite well.

Finally, I heard from Carolyn John Boyle, who wrote to my friend and fellow history buff Blake Stough with some info. Carolyn wrote that she recalled the approximate date of Holly’s death “because I worked at Sylvania Shoe at the time and walked to work. Was very scared because they hadn’t found her killer – I think they still have not found the one that did it. They thought maybe it was a robbery – the only thing I can remember is the paper saying she had been strangled and her sneaker was found nearby.”

Blake, after receiving that information, turned up several links on the case as well. South Western’s alumni site shares an “in memory” page for Holly, along with her class photo, here.

A Nov. 8, 1979 article in the Gettysburg Times one of the earliest in the case, was headlined Hanover Girl Was Strangled.

After being convicted of Holly’s murder, George Bane was sent to state prison, and escaped briefly in 1983, the Pittsburgh Press reported. Later reports said a prison guard was suspended for negligence following the escape, and Bane, who faced other charges in unrelated cases, was later captured and remains in prison in Fayette County today.

I realize this is a sensitive topic for Ask Joan, and my intent in sharing this info is certainly not to stir up bad memories of this time. Rather, I’m just hoping to ensure that Holly’s life – and unfortunately her death – are remembered.

3. On a much lighter note, I’d like to finish today’s follow-ups with a fun one. In May of last year, I had a request for where to get good reubens, and a couple weeks later, someone wondered about the best spot for Texas Hot Weiners. Many people were willing to share thoughts on both!

Fran Eck said “The best Texas Hot Weiners is the Famous Restaurant at 652 West Market St., York. As far I am concerned they are even better then the Weiner Restaurants in Hanover. Also the best Reuben sandwiches are at Central Family Rest. at N. George St. and Jefferson Ave.”

Alan Beaverson said, “I’ve tried the Texas hot weiners from Hanover, Weiner World and other restaurants and in my opinion the best are found at our own Famous restaurant located at 652 W. Market St.” (Two votes for The Famous!) Alan continues, “Reubens, the Paddock in E. York are real good. You can also make your own (experiment with the ingredients) and freeze them for later.”

And Joan Brownell shared a spot I didn’t know about as her reuben suggestion; she writes, “Go to Becky’s Kitchen, 5188 East Prospect Road, York, PA 17406 (info for your GPS) located one mile west of the boro of East Prospect and close to the intersection of Cabin Creek/Prayer Mission Roads. Order a turkey Rueben made of fresh kitchen cooked roast turkey breast, topped with her own made coleslaw, Swiss cheese, and thousand island dressing on pumpernickel bread and grilled to perfection. The taste is to die for. Check them out on Facebook!”

Then I heard from Lena J. Kline who recommended the reubens at Shultz’s Delicatessen in Hanover, where she works. “We also make very good Rachel sandwiches which is using turkey instead of corned beef,” she said.

I’d earlier suggested Isaac’s, and Michael, our original “reuben asker,” said he did give those a try and through they could use a little more corned beef and dressing, and a little less kraut, but is willing to keep trying!