Writing Ask Joan is always the best part of my day, but today it especially looks good in comparison to the other things I need to take care of. I’ve chipped a tooth, so I need to get to the dentist, and I need to schedule some orthodonial work for my daughter. Not a fan of dental work!

1. Memories of Hollander’s – Hanover, York
2. More on the Springwood Pool
3. Looking for a good pizza

1. We’d talked before about the Hollander’s in Hanover. But some readers wanted to know where there was a Hollander’s store in York.

In response, Ken Darrone let me know that he recalled it on South George Street across from the York post office. And Gordon Freireich said, “The Hollander name is still visible on a garage from the third block of S. George Street, behind what was the old Firestone store and is now slated to become George Street Commons.”

Philip Welsh remembered it, saying, “Hollander’s Sporting Goods store was about the second building north of Princess St. on the east side of S. George St. My father-law bought my Woolrich hunting clothes and rifle there. The Moose Club was there after Hollander’s was gone. It’s that big parking area now.”

Walt Snyder said, “Hollander’s store was located where Rosen electric (later was), 215 S. George Street across from the York post office. Hollander’s was a store similar to Pep Boys.”

Speaking of the Rosen family, I also heard from Aaron Rosen! He writes, “My brother and I bought the former Hollander’s building around 1965-66. It was at 215 S. George Street. It now is owned by the Lutheran Family Services. The sign over the store now reads C & H distributing which was another company after Rosen Electronics which had it from 1965 until 1990. If you look on the tiled entranceway to the store front you can still see the Hollanders name in the tiles. I used to kid Evelyn (Hollander) Mailman that I could dig it up for her and move it to her home. She and her family lived upstairs above the store in the early years of their business. I personally spent about 40 years of my life in that building and knew all of its nooks and crannies. People always were telling us about the store and how they received their first bicycle from the store. It is currently owned by the Lutheran Family Services and they use it for storage mostly.”

I heard from Bob Wolf of Shiloh. His fourth-grade teacher at Jefferson School was Mrs. Hollander, wife of the owner, and Shirley Cover also found the 215 S. George St. address and shared it.

Finally, I heard from Gwen Hollander Keiser. She writes, “I am the granddaughter of Ted Hollander who owned with 2 of his brothers, Lou and Al, 17 auto parts stores in south centralPennsylvania and Maryland after WWII called Hollander’s Auto Stores. Over time they began to close stores. Some were taken over by Joe, the Motorists’ Friend. The story in our family was that at some point, the Strauss brothers who became Pep Boys allegedly reused the logo and renamed the characters from Ted, Lou and Al to Manny, Moe and Jack. The character with the round glasses is actually my grandfather, Ted Hollander.” What a neat family story, Gwen!

2. We’ve talked about Springwood Park and pool several times since I mentioned it in an Ask Joan column early last year, and I’ve since received even more memories of this former summertime hot spot!

Glen Knisely said “I worked at the pool during the summer (around 1950) for Mrs. and Mr. Greenawalt. Went to Red Lion high school with both their son Bill and daughter Mary Ann. Had to hitchhike from Windsor to the pool.”

And Donald Hartman recalled, “The first time I ever went swimming was in the Springwood Pool. It was about 1950 and I remember the water was cold and the cement block walls were very rough. I don’t remember if I ever swam there again but I remember roughly where the pool was. It’s all filled in today of course and few or no signs remain. I also saw one movie in the Springwood Theatre which was located on the opposite side of the road from the pool just a little further down the road towards Yoe. I don’t remember what the movie was but I do remember the theatre was dug into the side of the hill. I remember it only as a theatre, there was no service station, and I seem to remember better seating than folding chairs. Of course this was around 1950 and those memories of others may be from an earlier time. The theatre stood empty for a long time and then was apparently torn down. I drive the Springwood Road quite often now but I just can’t locate the spot where the theatre was.” Funnily, later Donald wrote back and said, “It turns out I didn’t know where the pool was but I do now, and I also found that I know the person who owns the land its on. It’s on private, posted land and there’s no safe parking near it, but you can see the location as you drive past. Here’s how to locate it. Drive south on Springwood Road. After you pass the intersection with Chapel Church Road there is a private foot-bridge a short distance ahead on the right and a bit further on there is a gray house on the left. Along the right side of the road across from the gray house is a large broken block of concrete at the edge of the woods. That is the only part of the pool still visible from the road. The rest is hidden by trees and brush. The north wall of the pool is still visible when in the woods and I have included a photo of it. The theatre was located just a short distance past the pool on the left side of the road. I can’t find the exact spot but suspect it’s now occupied by a driveway.”

And Don was kind enough to share the photo below of that concrete he mentions! Thank you, Don, for your diligent work on this! 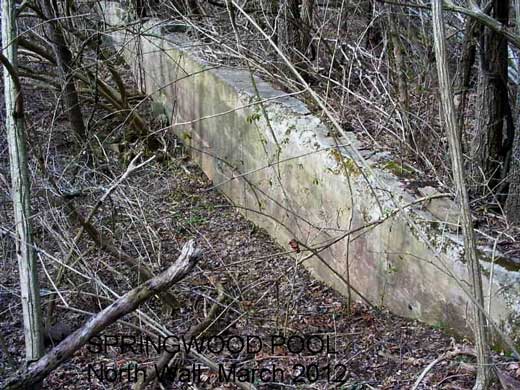 I also heard and received photos from Aleida Carroll. She said, “I’m sending you a couple of pictures I found that my mother had of Springwood Park and Pool. Hope they bring back memories to some of your readers!” Here are her family photos: 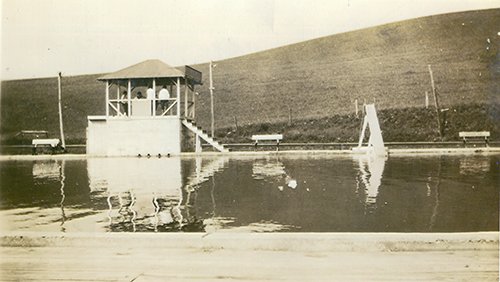 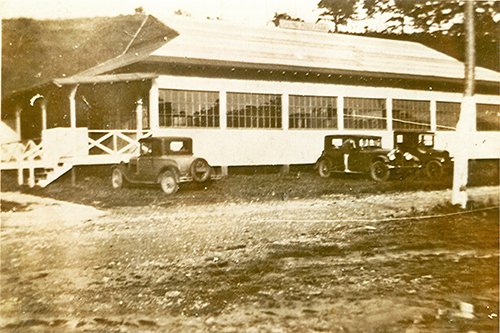 Finally, I heard from Laverne Stambaugh, who said, “I just had to write about Springwood Pool. My mother would give my sister and I money to ride the train to the pool. You got on the train at 490 E. Market St. The building is still there and so are the tracks. They would drop you off at the pool and pick you up later in the day. I think it cost a dime. The pool was made of cement and boy was it cold. It was fed by a nearby spring. We kids didn’t mind, we were having fun and it was a safe place to go.”

Thank you all for sharing these memories and pictures!

3. I would like to know if there is a place in York County to get pizza like they made in the ’60s and ’70s. NOT SWEET just lots of herbs and delicious cheese. Today’s pizza sauces are so sweet.
– Lynn

I am with Lynn – I am pretty opposed to sweetened pizza sauce or spaghetti sauce (what we call spaghetti gravy in our family). With a name like Concilio, you’d think I’d be an expert on this. I would say that off the top of my head, the best pizza sauces I’ve had have been at Spataro’s on Roosevelt Avenue and Mignano Brothers on Main Street in Glen Rock, though I’m sure there are many more places readers can suggest!