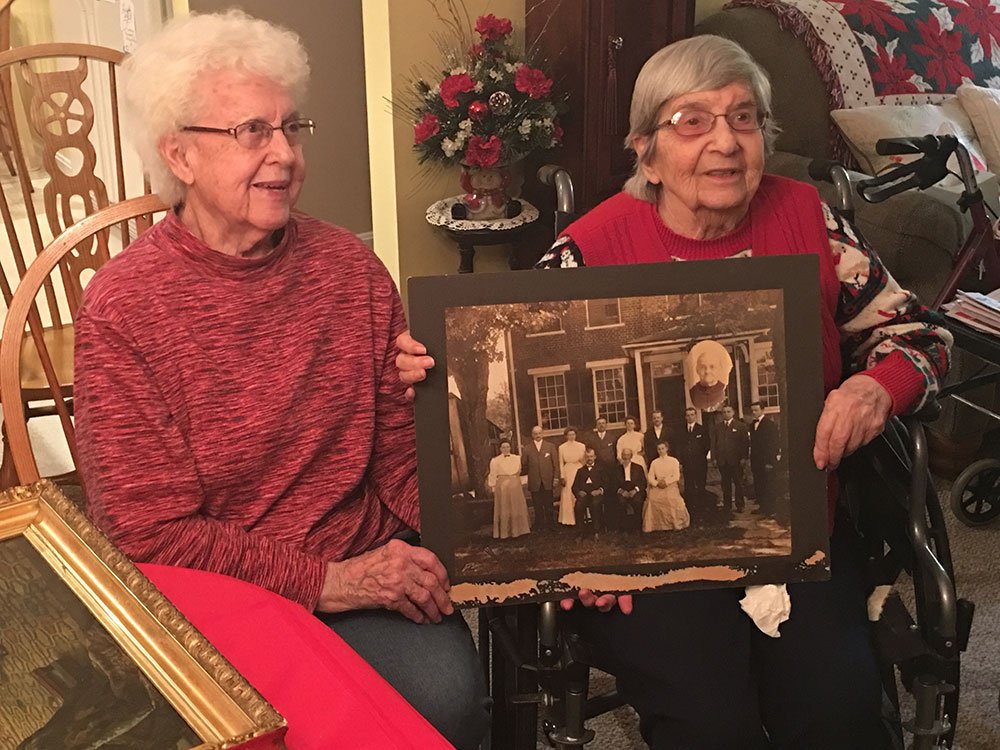 Donna Kober's mother-in-law and Rosa Bergen's mother were able to meet up on Christmas Eve to reunite Rosa's mother with this photo of her family, purchased by Donna's mother-in-law at a yard sale.
Posted by Joan ConcilioFebruary 3, 2019 Ask Joan, Hanover/South Western, Local memories, York City/SuburbanNo Comments

We’ve hit a number of topics in detail so far in 2019, so today I thought it would be fun to tackle some odds and ends of follow-ups to previous columns as well as some unasked questions.

1. Locust Grove School’s newest incarnation
2. Recalling Shoney’s near the mall
3. Reuniting a family with their photo

In January, I shared several reader memories of schools in the Hanover/Adams area, including Mount Pleasant and Locust Grove.

Locust Grove, which was in the Brushtown area outside of McSherrystown, later went on to become the Little Red Schoolhouse restaurant, which closed after a March 2018 fire. It was sold in July of that year, but I had not known to whom or what would become of the location. But some readers were glad to help fill in the details!

Ken Weiler, who is a member of the Hanover Area Historical Society’s Museum Committee along with Richard Crouse, who was one of the original memory-sharers I mentioned! Ken noted regarding Locust Grove, “The purchase of the schoolhouse was by the Half Pint Creamery owners, and it will be their new Hanover location in the near future.”

Reader Michelle Snyder also confirmed that. So, McSherrystown friends, be on the lookout for some new ice cream as the weather (hopefully) continues to warm up…

2. Recalling Shoney’s near the mall

A fun (and actually easy – that’s rare!) question came my way not too long ago from Julie Randall Romig, who I know from my many years as a community editor for the YDR – Julie is Central York School District’s Director of Communications and Marketing.

Julie wrote, “I’m pretty certain that there was a Shoney’s Restaurant in the space that is now located by Texas Roadhouse in East York. I believe it was there into the mid- to late ’90s. Can you confirm? I have been searching all morning and am coming up short.”

That one was easy for me to confirm because my family ate there quite regularly. That and Family Time were a couple of our regular haunts. So, yes, Julie, you’re absolutely right! It may have opened in the late ’80s, based on my recollections of when we went there.

Another side note there: If you remember Charlie Brown’s on Whiteford Road (from about 2005 to 2010), near the Shoney’s location, you might recall it had previously been Pargo’s.

Well, Pargo’s, when it opened in December 1994, was owned by the same people who owned Shoney’s!

3. Reuniting a family with their photo

Toward the end of October, I shared the story of two readers who were going to connect regarding a picture seen in this column.

It started when I published a letter from Donna Kober, whose mother-in-law originally purchased a picture at a yard sale that had the photo of what turned out to be Rosa Bergen’s family behind it.

Donna had written to tell me how thrilled her mother-in-law was about us finding Rosa and her family, and I was able to put Donna and Rosa in touch.

The best part, though, came later. On Christmas Eve, the two families got together to reunite the photo with its people!

Donna wrote to me after that meet-up, “Rosa was able to bring her mother, Romaine, to see us on Christmas Eve. What a wonderful visit… I can’t thank you enough for helping my mother-in-law to find the owners of the picture. She was thrilled.”

Donna sent me some photos from that meeting, and I’m very happy to be able to share those today!