Ask Joan: Following up to close out the year

As the year draws to a close, it’s time to wrap up a few lingering topics from 2017 (and earlier) so we can move into 2018 and tons more great Ask Joan questions! I hope you’ll enjoy tying up these loose ends.

At the very beginning of 2017, I shared a question from longtime reader Dale Boyce about a sign at the corner of East Prospect and Freysville roads in Windsor Township, pictured with today’s column. I almost immediately received a bunch of feedback, but had not yet gotten to share any, so I’m looking to remedy that before the year is out!

From Barb Byrd and Ann Robertson, I received this note: “The sign is what is left of a Glidden Paint Sign. The Reimolds owned a hardware store and later sold to the McCleary family. This hardware store (also a mini grocery, sold penny candy. A few feet from the sign still stands the building (addition added on for someones’s home).”

Kelsey McCleary was able to confirm that, noting, “My father has told me that this sign was for Reimold’s Supply Company, which was a hardware/convenience store that also sold Phillips 66 gas and was owned by my grandfather, Robert McCleary. The sign was put up in about 1960.”

Jon Arvin also remembered the same, writing, “The sign remnants you’re inquiring about were once a Glidden Paints sign. I remember years ago that a paint store was located next to the house on the corner, which if memory serves me right, at that time was the church. The sign remained intact for many years after the paint store closed. Unfortunately time and the elements eventually weathered this landmark to its current state. Hope this was helpful. I’m not 100 percent sure it was Glidden, I’m 100 percent sure it was paint advertising.” Well, Jon, based on other responders I think you can be 100 percent on both!

Reader Joyce Ilyes also recalled the church nearby; she notes, “The sign was for a store named Reimold Paint and Supply Co. The store was the second building on the right, going south on the Freysville road from the East Prospect Road intersection. It has been converted to a house. The first building is a house owned by Grace Baptist Church that is there on the southwest corner of the intersection.”

And Jim Miller confirmed it advertised paint in the late 1950s or early 1960s, with the store on the other side of what was then called Millers Mill Road. He also noted that his great-grandparents built the aforenamed mill on the other side of creek. Janda Wright also noted that what we call Freysville Road was in the past Millers Mill Road; she grew up on it and also remembered the paint sign.

Reader Dan E. Snook also confirmed the sign advertising Reimold’s store and added, “Mr. Reimold (he had a ‘flat-top’ haircut) lived in the white house (still standing) near the sign and had his small store just below the house on Freysville Road. I grew up near the Locust Grove Elementary School (the first all-electric school in Pennsylvania) and visited/walked to his store many times in the late 50s. My brother Alan and Peter Jermyn (whose father raised Black Angus cattle nearby) would frequent his store often during the summer. We would ‘swim’ (skinny dip) in the creek nearby also. Our walking ‘travels’ along the highway would provide us with several empty soda bottles, which we would then turn in to Mr. Reimold for 2 cents or so… and buy another soda or candy from him. I remember he had this huge round ‘carousel’ full of all sizes of nails that I would turn around. He retired and he and his wife moved to Jacobus. The store sat vacant several years, had additions built on to it, and is now a residence.”

Dan, that’s an amazing set of memories and the most detailed I’ve received on this great store – thank you for sharing. Also, many thanks to readers Linda Williams, Pat Lehman, Paul M. Smith and Dave Dietz for confirming all this information as well!

John E. Shanbarger Sr. wrote to me some time ago about a topic I haven’t touched on in a few years: Joe Bury’s Famous Hamburgers.

He noted, “In the 1920s/1930s before and later, the Joe Bury family had a walk-in and sit down on bar stools at the eating bar, also there were two tables with four chairs each. Around noontime there would be eight to twelve customers. Usually two men did the cooking and frying in front of the customers. The specials for lunch were Bury’s hamburgers, home-cooked baked beans, french-fried or home-fried potatoes, and all the coffee you could drink. Joe Bury’s walk-in was located on North George Street close to the Strand Theatre. The other Joe Bury’s walk-in was located on West King Street, back of the old courthouse and close to Weinbrom Jewelers. But they were not fast-food restaurants.” 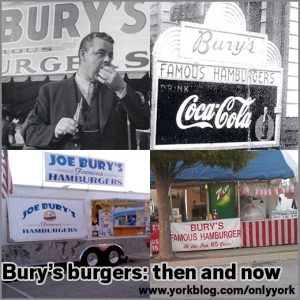 John continued his memories, “The City of York had a mixture of industries that overall employed thousands of workers. Most blue-collar workers were paid 35 to 48 cents per hour. The trolley car traveled throughout the city transporting employees to their destinations. There were industries of sewing factories, clothing, tobacco, vehicle manufacturing, chain and wire factories, lime, Medusa gray dry cement, stone and dry white cement. The railroad coal-fired locomotive hauled passengers in from outside the city, supplies, the U.S. mail, milk, vehicles, machinery and loose hay and railroad ties. There were ladies’ and men’s clothing stores, Haines Shoes, and there was a Penney’s and Sears Roebuck on West Market Street. There was a peanut shop with grinder and a monkey who had a cup and wanted a penny or two. International Truck had a display building and a large repair garage.”

And, he concluded, “In the mornings you could drive to the city of York and at the top of Queen Street Hill you would see a ceiling of smoke smog over the city of York coming from the coal-fired boiler smokestack chimneys of different industries, which supplied excess steam heat to several residents, businesses and the Comfort Station at Center Square of York.”

John, I’m so glad you shared these memories with us, and I apologize for not being able to publish them sooner! (You also made me very hungry for a good Bury burger…)

3. A little more on butcher bologna

I received a letter in the past week from reader John Bratten, who lives in Newark, Maryland, and is wondering if he can get Ahrens butcher bologna and country pudding delivered.

This reminded me of a past letter I have about Ahrens, which came from Scott Klinedinst. He wrote, “Stumbled on your site while looking for what happened to Ahrens butcher bologna. My father did all the construction and building repairs for Ahrens Meat Market, I believe it was located on South Queen Street in York. We’re talking 45 to 50 years ago – Ahrens would give Dad tons of his bologna to take home. Grew up eating the stuff. When they folded up, really missed the stuff. Couple years ago stumbled on some Ahrens Butcher Bologna at Weis Market at Queensgate shopping center, and gave it a try, pretty darn close to the original, they still carry it. According to the label it’s made by Kessler’s up in Lemoyne. Can only assume they bought the name and the recipe. I think most people that remember Ahrens bologna would agree that the Kessler bologna is much closer to the real thing then some of the other local butcher bolognas. Hope this info will help someone… P.S. Great site for us nostalgic people that still have some memory left.”

Scott, I definitely appreciate that! And John, to your original question of can you get the bologna shipped to you – sadly, Kessler’s only ships hams due to refrigeration needs, but most Weis Markets are carrying it. Your best bet might be to take a half-hour road trip up to Millville, Delaware (the closest Weis to you) and see if you can get some there – though I’d call ahead and see first, of course! You may also be able to arrange some kind of shipping from them; most of the Weises in our area are very customer-friendly, so it couldn’t hurt to ask!