Count ’em, that’s five “fairs” in today’s title, matching the minimum number of times it looks like I’ll be at the York Fair. One of my friends here at the YDR joked that we should have a “guess Joan’s weight” contest after I’m done my food-and-fun frenzy. Let’s not and say we did!

1. Details on Seiling Furniture
2. Who are you calling a dork?

1. In the June 6 edition of Ask Joan, I let John Dolan both ask and answer his own question regarding a former business in the Railroad area of southern York County, which it turned out was Sieling (Seiling, in some spellings) Furniture Company.

Many, many people wrote to me in response to this with more information about Sieling. First was Mike Gantz, who says, “I worked there in 1965, my first job after high school. I was an assistant rip saw operator. It was hot and sweaty and I think I made $3.00 and hour, which was big money for a 17 year old. They made top of the line furniture, some of which was sold to Egypt and Saudi Arabia, at least that’s what I heard. I went to school with Scott Seiling who was a son or grandson of the owner. I remember coming out of the Army and finding out it was closed. When I came back I found that a lot had changed in York County.”

Part of what John had originally found out about was a billboard in Railroad promoting the company. Bob Riese of York sent me a photo of how that billboard looked about 10 years ago. 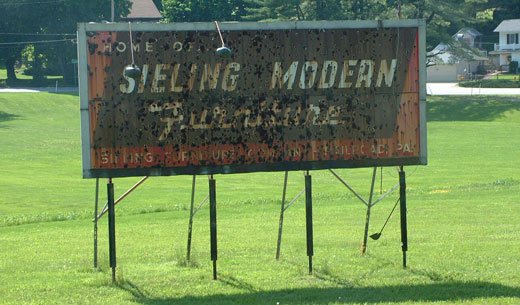 Lucille Waugh of Shrewsbury Township writes about Sieling, “My father, Walter Measley, worked there on the mill floor until they went out of business. I have a group photo of the workers that includes the bosses, secretaries and cooks (about 156 people) and to the rear of the group is one of the Sieling Furniture semi trailers. I mentioned the cooks, because at one time the company had a cafeteria in a second building which has since been torn down. I have a dinner plate from there, that was my father’s. I have memories of going in the plant for some reason, to see my Dad. I would go up behind the building, next to the railroad track, and he worked right inside of a door back there. Thanks for awakening that pleasant memory of my dad.” Thank you, Lucille, for sharing it with us! 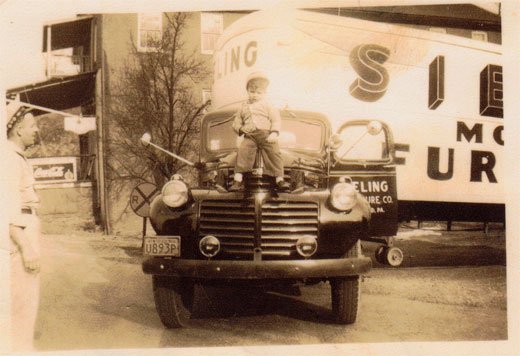 In another Sieling family story, Sue (Elphick) Smith of Springfield Township writes, “I am sending you some pictures! My Dad, Henry Elphick and my brother Bob Elphick were Sieling’s truck drivers. The little guy on the hood of the truck was Bob at a very young age.” That’s her dad, Henry, at left with Bob. 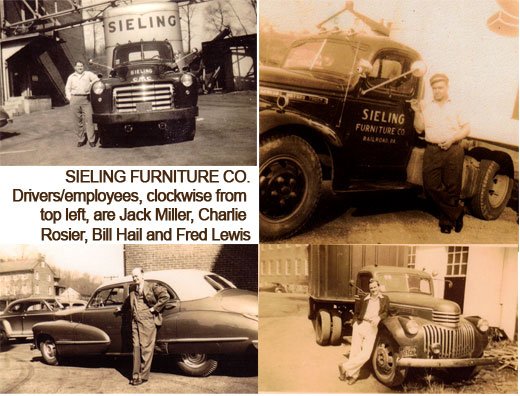 Sue continues, “Sieling made ‘High End’ wood, veneered furniture. Not too much of it was sold around here. It was sold in New York and Chicago. I still happen to have a large dresser from Sieling. Some of the other drivers in the pictures are Charles Rosier, Bill Hare and Jack Miller. There is also 1 picture of Mr. Fred Lewis, my youngest brother was named after him. Fred Lewis Elphick. All my brothers and my children too were big fans of the Sieling trucks.” 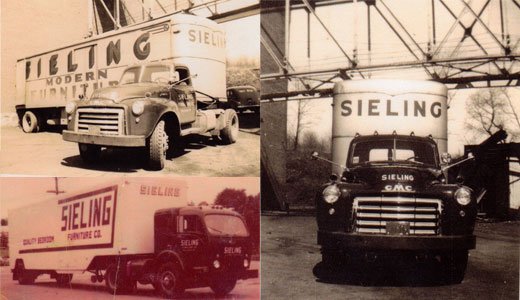 I also heard from Sue’s daughter Monica Smith, who lives in Colorado. She writes: “My mother sent me your article on the Sieling/Seiling Furniture Company. Of course, she first asked if I had any photos of my grandfather’s delivery truck. I did, but where oh where could it be. In fact, I did just come across it, but it took many boxes and photo albums to find in again. The very last book, box and envelope of family photos I found it. I called her and she said yes she found hers too lots of them from her cousin who left her a bunch of photos that might have gone in the trash. A few days later she sent me copies of her photos and lo and behold mine was different. Then she also sent me your article … I never realized the local name was so important other than the furniture factory. When we were very young I recall my granddad Henry Elphick taking me along to the factory and sitting me in the truck cab. He told me to blow the horn and just pretend I was driving the truck. As I recall it was a Mack truck cab, the flat nosed type. Grandpa needed to change a tire before his next run and I was proudly sitting in his cab. Oh yes, and blowing that horn. Afterward, we went into the building. I recall the sight and smells of wood furniture and chemicals used to finish the wood surfaces. Grandpa would always treat us to candy, most always the pink wintergreen lozengers. One of my favorites. I know I was always very special to my granddad. I was his first granddaughter to his only daughter. He called me his ‘princess’, though I know he loved all 12 of his grandchildren just the same. Lo and behold though I was much more a tomboy than a princess, still am!” 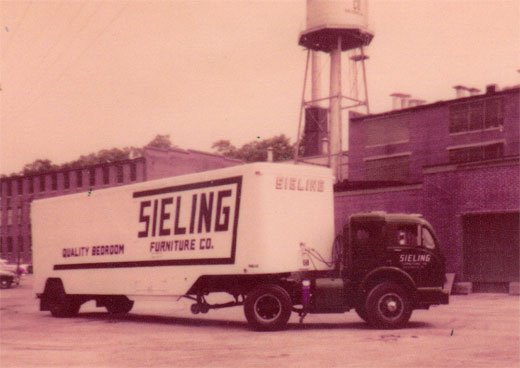 Monica adds one more cool story; she says, “Funny thing I have a handmade rolltop desk and chair made by my great uncle Harry Dietz. It was made from scrap pieces of walnut not more than six inches long that my granddad scavenged from the furniture company. It sure is a prize to the family.”

I bet it is! I’m so thrilled to be able to share such fun memories.

“Robert Finke is looking for information on the Dork Candy Bar made in York. It was made by the Classic Candy Company about 1996. Does anyone have any other knowledge on it. He would love to find a wrapper or a complete candy bar. How about an advertisement from a local paper? Who can help him? It was an item thrown to the crowd by the County Commissioners during a York parade.”

This was more fully the Warrell Classic Company, which in later years would make Katharine Beecher Buttermints, York Classic Caramels and more. I’ve actually sent them a note asking for more info on the “Dork,” but in the meantime, I’m guessing someone in York County must have such a candy bar, wrapper or ad around; in fact, we might be more likely to have some of that than the company, which I hope doesn’t keep 15-year-old candy bars 🙂

If you can help Robert, let me know!