Our daughter, Sarah, has officially finished what would be her sixth-grade year if she were still in public school! (We don’t exactly keep to a particular “grade level” in our style of homeschooling.)

Tonight, she meets with a homeschooling evaluator, who will provide a report to our school district confirming that Sarah is making good progress; we also are required by state law to turn in a brief portfolio of work samples to the district.

We’re excited to get started on “next year” after a short break… but in the meantime, Sarah’s the envy of her public-school friends, who have a couple of weeks left!

Today’s Ask Joan is a special follow-up edition on Valley View Park in the Hellam area, complete with a special surprise!

Tom Gracey kicks off the memories. He writes, “You were talking about ‘Valley View Park’ in Hellam. I remember going there with our parents as kids. I remember Minnie Pearl who always had the price tags on her hat. Then there was ‘Grandpa Jones’ with his banjo. There was some of the top names in ‘country’ and ‘bluegrass’ that performed there on Sunday afternoons. We thought they were Amish but later in life realized they were probably Mennonites that would attend these performances. The large strawberry fields right beside the park where my brother and I would pick and eat the strawberries. While enjoying some great music. Thanks for bringing back some great memories of our family outings to ‘Valley View Park.'”

Thank you, Tom, for sharing!

Joan L. Wise says, “I have very fond memories of Valley View. When I was a mere teenager my grandfather was a part of security there and I would go with him every Sunday. Sometimes I could not go at the same time that he left so I would walk from East Prospect to the park. I really don’t know how far that is but it was quite a distance but nothing would keep me away from seeing all the attractions there, and there were many. Today I am an 80 year old lady who looks back on those wonderful days and feel a little sorry that today there is no way that a young girl would be able to walk for that distance and be safe. Thank you for the memory. It has been a long time since I have reminisced about my wonderful experience there. Big names from Hollywood who I would not have been able to see anywhere else. But also the locals – The 101 Ranch Boys and Shorty Fincher and his wife Sally and the band.”

And longtime commenter Audrey Lerew writes, “Everything Wayne wrote you is exactly right. I worked there as a teenager. There were games and food. Sally and Shorty Fincher were great caring people. They sure knew the stars. They used to live in North York. First two years I worked at a stand where they had the coke bottles in the wooden crates and you threw wooden rings to ring the bottles. Next two years I worked at the french fry stand. There was also a kitchen building. I remember one time Lash LaRue came. He was a western movie star. He drove in a big white Cadillac. Painted on his fender was his name painted as a Lash. I remember Fuzzy St Jones one time. He was hysterical. I recall him jumping over the railing in the kitchen building to get ahead of the people in line. He was so funny! It was a very nice clean family place to go to.”

Here’s my “big surprise.” I have what I believe is a previously unpublished photo taken at Valley View Park, of Lester Flatts and Earl Scruggs performing. 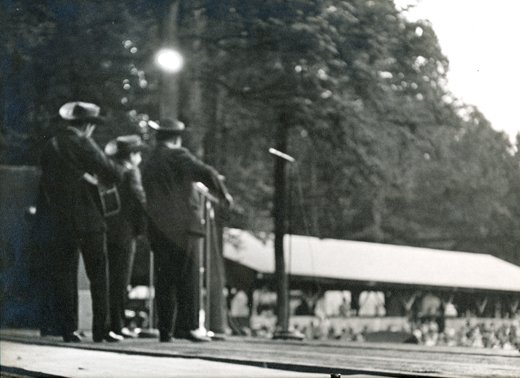 This photo was taken by Jim Goodling. Many of you might remember Jim, who was a longtime commenter. He passed away earlier this year after a battle with cancer, and his wife, Mary, was kind enough to share with me some photos Jim had taken in and around York. You’ll see more of Jim’s great pictures later this week, but I just had to include this one in today’s post.

Meanwhile, more memories arrived in the mail about Valley View as well. George M. Trout Sr., writes, “I notice you seem to have much mail or phone calls concerning Valley View Park. Not surprising for the time period. No TV, no seasonal entertainment except Hershey Park. The York Fair was a one week affair, and then the grounds were locked up the rest of the year. The ‘Valley,’ as it was called, was filled all summer and parts of the fall. Area and ‘soon to be bigtime’ stars appeared on a regular schedule. Roy Rogers and his horse Trigger, western movie star Ken Maynard and his sidekick Rawhide, Johnny Cash and other names, big at the time but no longer remembered.”

And Audrey Miller of Windsor wraps us up for today, saying, “Valley View Park was south of Hellam at the top of the ‘Hellam Hill.’ Shorty Fincher was in charge. It was there for a long time. My home as at the bottom of the hill and every Sunday night during the summer we could hear every song and word that was said – especially if the wind was coming that way. The program went on until midnight. I never cared for ‘hillbilly music,’ so I really didn’t enjoy hearing all the music. People rode the bus from York to Hellam and then walked from Hellam to the park. Of course then they walked back to Hellam to get the ride home.”

Thanks to everyone for sharing these memories of “the Valley!”