Somehow, it’s cold. Like winter. It was 80 degrees not that long ago. Did we skip fall? I, for one, want it back! My daughter went with my sister and brother-in-law to the Renaissance Faire yesterday, and they were REALLY chilly. 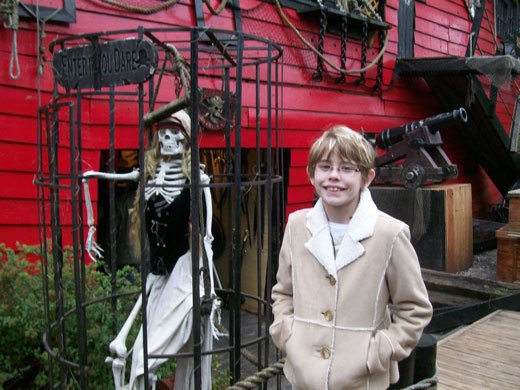 See? Bone-chilling! For my part, I’m drinking hot chocolate at my desk to warm up.

1. Good ‘lost and found’ news
2. Giving the gift of experiences
3. Following up on Mahlon Haines

1. Remember the virtual lost-and-found box I mentioned back on Aug. 29?

Well, I’m happy to report that I found homes for both of the items that had found their way to me. Debbie Rutter was able to put a local student back in touch with her autographed photo of Coach Herman Boone, and a niece of Earl W. Quickel was glad to receive the certificate from President Ford honoring her uncle.

Thanks to everyone who helped reunite these items with their owners.

2. In the interest of not ruining the surprise, I’m not going to tell the source of this next question, except to say it’s from a friend of mine.

This friend has a little girl in her family who will soon turn 5 years old. Instead of buying her “stuff,” my friend asked if I could recommend some experiences they could share.

Since I thought this might be a common question, I thought I’d let you know my suggestions. They included a trip to ZooAmerica at HersheyPark; a ride on the Strasburg Railroad; a day at the Hands On House, also in Lancaster County; and a “princess” manicure and pedicure or a tea party at one of our local tea rooms.

My friend seemed please with those suggestions, and I hope she and her young relative have a very fun day! Do you have other suggestions for local or regional “experiences” that make good gifts? Don’t forget that Christmas is coming!

3. Wayyyy back in June, reader Sheree ask about Mahlon Haines and his 3/4 Club.

In response, I’ve been compiling about a half-ton of Haines info. Many thanks to readers Yvonne Leiphart of West Manchester Township, Floyd Ilyes of York Township, Carolyn Dietz of Hallam and Art Levine, all of whom provided information and details on Haines.

Many remember Haines as “the shoe wizard,” the owner of a shoe store on South George Street near the Rialto Theater. Of course, Haines was also the builder of the famous “Shoe House” in Hellam Township, which was created in 1948-49 to serve as a big advertisement for Haines’ shoe sales business. Senior citizen couples and, later, honeymooners were for many years invited to stay there at Mahlon Haines’ expense, which was pretty amazing.

Haines was a notable marketer and businessman. One thing of interest: His picture was on the end of every box of shoes he sold. He also raised buffalo and hosted many Boy Scout campouts and other events on his “Wizard Ranch” near the Susquehanna in Hellam Township; that land was donated to the local Boy Scout council just before Mahlon’s death in 1962 at age 87.

That’s what brings us to the answer to Sheree’s original question, about the 3/4 Club. According to a 2004 book by Michael Weaver, “The Life and Times of Mahlon Haines,” generously donated to the Daily Record by Art Levine, that club was actually a softball league for those 75 and older that Haines was part of in St. Petersburg, Fla. In his final season, at age 82, the book says, Haines led the league with a .593 batting average and 21 home runs.

Sheree, sorry for the delay in our answer, but I’m glad we were able to find it. I’m also glad for all the other information that was sent to me about Haines, including the copy of a letter to the editor he wrote, seen alongside this question, which was from Carolyn Dietz’s family collection. Thanks, everyone, for a chance to peer deeper into the life of this interesting man.