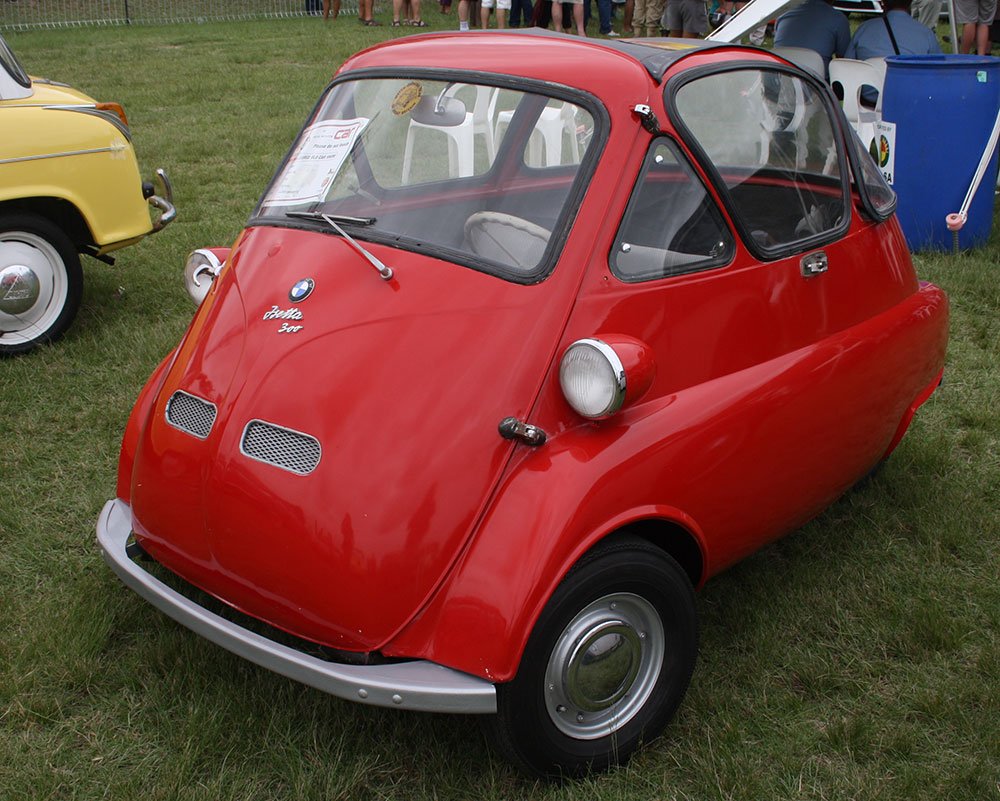 The Isetta, seen in this photo by Bob Evans, was a little car made by Italian manufacturer Iso, then by BMW, in the 1950s and early 1960s. While gas-powered, they were reported to get up to 40 miles to the gallon.
Posted by Joan ConcilioSeptember 23, 2018 Ask Joan, Local memories, York City/SuburbanNo Comments

Cooler weather, people who’ve had gigantic inflatable pumpkins in their yards since Labor Day, and the inability to visit a grocery store without seeing a display of Sweetzel’s Spiced Wafers and store-made pumpkin rolls: I guess it’s fall in York County. I’ve never heard of a place that got as into fall, and especially Halloween, as our area. I’m not real big on the Halloween part, but my daughter loves it and thinks of Spirit Halloween as a “year-round home decor” store, so we dug out the boxes of decorations in the past week. She gets the black cats and skeleton things, and I enjoy the nice autumn leaves and owls.

That has absolutely nothing to do with the memories and questions we’re talking about in today’s column, though. Those are “year-round mental decor,” you might say?

1. Recalling cars of the past
2. Memories of York Opera House
3. Beaux Arts Ball at Yorktowne

1. Recalling cars of the past

Jeff Boll writes, “Trying to find out info about early 1900 electric car owned by Guy V. Lehr, who had an auto repair shop on North Franklin Street in York in the 1940s and ’50s. I lived in the neighborhood and have fond memories of the car.”

I admit: I like, but do not know a ton about, cars. So Jeff’s question led me off into an internet search that included an electric-car timeline put together by PBS that starts back in 1832: “Scottish inventor Robert Anderson invents the first crude electric carriage powered by non-rechargeable primary cells,” they list.

Definitely had no idea about that, or that someone in York might have had an early-1900s electric car back in the 1940s, so I’m very interested in hearing more if anyone recalls it!

And a few days before I read Jeff’s question, I had been reading about the Isetta, a tiny car from the 1950s/1960s where the whole front was the door, like you can see in the photo with today’s column. While they were gas, not electric-powered, I was reading that these cars could get as much as 40 miles to the gallon, a huge deal compared with many other cars from the ’50s. I’m wondering if anyone from York County had an Isetta, or remembers someone who did. I’d love to hear about those, too!

And for my last “car note” today, I heard from Ronald L. Easter Sr., who was responding to an earlier column about Huntley’s, formerly on Memory Lane in York.

Ronald wrote, “Enjoyed seeing pictures of Huntley’s, which my uncle Wayne J. Gross’s construction company built. I had a 1967 yellow Camaro convertible in 1969 which I rode the Loop with, also looking for that special girl. Huntley’s is where I always stopped at for food and to chat with friends.”

Many of the Huntley’s memories shared involved the Loop (or the Circuit), and it was very cool to see Ronald’s cruising vehicle! (I’d heard before from his uncle Wayne, so it was neat to hear from another family member too!

Reader Thomas E. Wolf wrote to me recently about a York arts location that we haven’t talked too much about. He says, “Does any person remember the York Opera House that later became the telephone company? When I was a child, I always thought that the front of that building was so beautiful! It was on Beaver Street across from The Bon-Ton.”

For those who are curious, you can see a photo of that building at cinematreasures.org/theaters/40778. It was designed by the Dempwolfs, who were noted architects in the area, near the start of their business.

The York Opera House was immediately next to what was known as the “Auditorium,” another theater, which later became the Orpheum.

I’d certainly love to hear more about the opera house!

Not too long after I wrote about attending the funeral of my friend and longtime Only in York County reader Jo Ott, Linda Just, a friend of Jo’s, wrote to me. She said that she and Jo had met at the YWCA quite a few years ago. “I really liked her humor, and she mine, and her insight to many topics. I especially liked her laugh. We shared photography and gardening interests among other things… I will miss her for sure.”

Linda had a question, too, that I’d like to help answer for her: She said she’s looking for information about a set of events that were held in the 1950s at the Yorktowne Hotel, each known as the Beaux Arts Ball or Beaux Arts Gala. She said longtime York Sunday News columnist Mary Stephenson, who passed away in 2010, was involved with the ball.

Linda is hoping there are readers who know more about it, especially who sponsored the event, and I’d love to help her out! Does anyone reading have more information?