Look, a bonus Ask Joan this week, in honor of the first day of March.

1. In this December Ask Joan, Bill Unger was seeking information on a fire at a business outside of Red Lion.

This was a bit of a tricky one – some people thought Bill had ballparked the date of the fire incorrectly; others remembered multiple fires at different places; and so on. So, I’m going to share the information I have received so far, and hopefully pull it together in some way! Essentially, I’ve heard reports of two businesses, the Countryside and Luddy’s, both of which had fires at different times.

Skipper said, “I believe the place Bill Unger is referring to on Route 24 south of Red Lion was Kohler’s Drive-In … that was in the early ’50s. Then it was Luddy’s, and it burned to the ground but I don’t recall the year, but probably in the mid to late ’60s.”

Jeff Fix also mentioned Luddy’s, as well as anohter suggestion, “I think Bill is referring to either the Countryside or Luddy’s, but his timing is a bit off in either case. The Countryside was on the Cape Horn Road (Route 24) between Lombard Road and Chapel Church Road about a mile north of Red Lion. It originally opened as a grocery store in the mid ’70s that went out of business and then became the Countryside. They had a country rock theme (which I hated) and I used to meet my wife and other friends there for happy hour. It burned down sometime in the ’80s.” Meanwhile, Jeff also said, “Luddy’s was on Winterstown Road (also Route 24) adjacent to Red Lion Country Club just south of Red Lion. It was originally Kohler’s Drive In and become Luddy’s in the early ’70s. I remember eating there with my Mom when I was in high school in the early to mid ’70s. It also burned down but I can’t remember when. There’s a vacant lot there now.”

Judy Pressel also remembered Luddy’s, saying it did burn down. “We used to buy crabs there,” she added. And Barbara Eckert did as well; she said, “I remembered Luddy’s Seafood which was maybe a 1/2 mile or so down 24 after you turn right at the current south-end Rutter’s. They never rebuilt and I think moved the business to Shiloh or Dover?”

And perhaps the best source of information I received was from Greg Halpin, now deputy chief for York’s Department of Fire/Rescue Services and longtime area firefighter. He wrote, “I think you may be referring to a fire at the former seafood restaurant on Route 24 south of Red Lion in the late 1970s or more likely the early 1980s. I was there that night, it was freezing cold, that cold that the sprocket holes on my film in my camera was breaking from the cold. … I THINK the restaurant at one time was Luddy’s Seafood or something to that effect. However, if you look at the sign in the one photo I think Luddy’s is painted over and it just says SEAFOOD. My notes say that it was overnight January 17-18, 1982, it was near zero degrees, and that it was a bar/restaurant. I do not have a name for the establishment. I’ve attached a photo or two that I took of the fire that night.”

Greg’s photos were an amazing look at at least one fire in this area, if maybe not the only one! 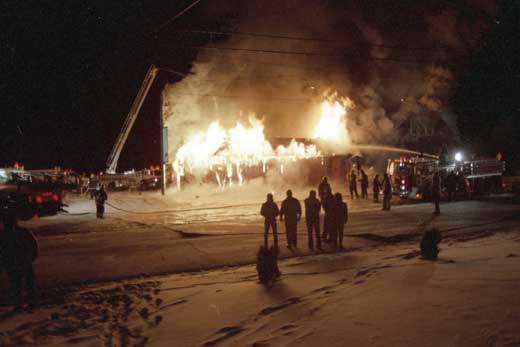 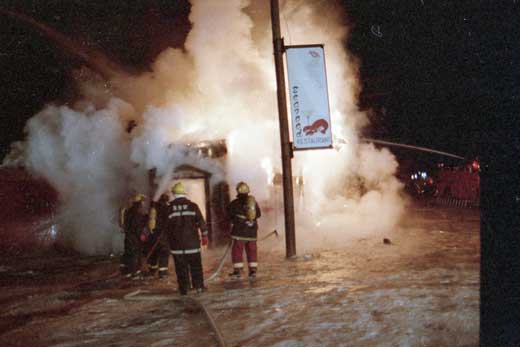 Many thanks to all for sharing; Bill, I hope this is at least a start to helping you pin down your memory!

2. In this edition of Ask Joan from early March of last year, Barbara Rexroth asked about some city neighborhoods: The Gap, Bullfrog Alley and Girard.

Terry Parr replied and said, “I spent my early childhood living at 426 Prospect St. so I am familiar with the area around Girard Ave. including Girard Park. I remember several small Mom and Pop stores in that area. One was in the garage behind a house on Lamar St. with the front of the store facing the alley behind the house. I went to Noel Elementary School with the store owner’s two sons. I believe their names were Danny and Dennis Warner.”

And Tom Gracey said, “Regarding (the) inquiry about the ‘Gap,’ I grew up on the 600 block of Smith St. When I was about 6 years old is when we moved there. This would have been in 1957. This was a great area at the time. We had the Boys Club Pool to spend our summers swimming. Then there was Kiwanis Lake where we would go ice skating in the wintertime. They had a stone area there for building fires to warm up if needed. Or we could go up to Farquhar Park for some of the best sledding in the area. My brother and I would leave school at Edgar Fahs Smith when we were older and walk down to the block plant at the quarry (off Roosevelt Ave.) after school. Our dad worked there and would have our small game hunting gear in the car. We would hunt for pheasant and rabbit until he got off work. This was a great area for kids to grow up in. Then we had Geesey’s store on the corner of Pershing and Front streets. Also there was a butcher shop on the 500 block of Pershing beside Willis Run. Shorty Kehm who worked at the butcher shop used to make an amazing turtle soup. On the corner of Smith St. and Parkway Blvd. was Chick’s Amoco; beside that was a dry cleaners and beside the dry cleaners was the Pizza Shop which was owned by a lady who lived on the 700 block of Pershing Ave. We had a field behind our house that had a treeline in it. We built tree forts in these trees and would go up in our tree forts to watch the fireworks on Labor day. I had heard from one of the dads from Smith St. that the ‘Gap’ got its name from being the low lying area area between the the high point of Farquhar Park and the high point at N. George St. at Prospect Hill Cemetery. This was a time when kids were allowed to be kids without all the safety regulations and rules that today’s kids must deal with. I can’t imagine a better place to have spent my childhood.”

(If you’re interested in a photo from Chick’s Amoco, check out the work of the late Jim Goodling here!

Carl Huber said, “BullFrog Alley: East York, approx. 900 block E. King, Wellington, up to Poplar. EW ran from about Spruce, (now Norway) or perhaps Sherman, to Albemarle St. My mom, and her friends were ‘Bullfroggers,’ supposedly because the area between Wellington and Edison was swampy in the early 1900s.”

Diane Berkheimer also wrote about Bullfrog Alley, “I have been trying to find out more about the gypsies that lived in Bull Frog Alley. There is a story about my aunt, who was born in York in 1901 who continually overate and she would have some ‘fit,’ and my Grandmother Weber would send for this gypsy ‘Amish Canoe,’ I am spelling this phonetically, she would come to my grandparents’ house and do some voodoo over my Aunt to bring her out of her spell. Do you know anything about this? I have searched high and low and can’t come up with anything.”

Meanwhile, Joli Harrington, local freelancer, said, “I wrote a story, probably 15 years ago, about Bullfrog Alley. I wrote about
a man, who lived on King Street, I believe, and he told about the gypsy culture that lived in the area and Bullfrog Alley.”

3. Last week, we sought out a recipe for ham barbecue from some local restaurants of the past. (Still looking for one, by the way, so please feel free to share!)

This week, I heard from two people looking for ANOTHER sandwich recipe.

First, Bruce Barger wrote, “To (frequent commenter) Melanie P. or any other former Peoples Drug employee, I’m looking for the recipe for the beefy, sloppy-joe looking sandwich they used to sell at their soda fountains? Anyone?”

And Ed Worthington said, “Bruce et al: I too have been trying to get a hold of someone who might have the recipe for that ‘beefburger.’ As I recall, it was called a beef burger, but was really a sloppy-joe type sandwich. It had the most wonderful flavor and I have never been able to duplicate it or find anything close. Love to find out the recipe.”

Any suggestions for these sandwich-loving gentlemen? Would love to help!