Well, the Concilio/Otto family has returned from Washington, D.C.! We had an amazing time, dampened only slightly by the fact that I got sick and we had to come home a day early. We crammed a LOT into our three days, though. (If you’re really interested in the Great Otto Traveling Adventure of 2012, I’ve got the first post of a series up on our personal blog here, with more to come over the coming days.)

In good news, we saw a Jeff Koons sculpture almost daily on our walks, adding to the “York County is everywhere” vibe!

1. Back in February, Connie Pickard wrote about a remedy her grandfather purchased as a child, Mountain Oil, at a drugstore in Hanover. Connie wanted to know the name of the drugstore, and I was curious about this tonic in general! Unfortunately, I haven’t found the particular drugstore name in Hanover that sold it, though I have some possibilities – and I heard lots about the oil itself, which I’m glad to share!

Bob Hake of Winterstown writes, “I think I have the info on mountain oil. It was called Boyd’s Mountain Oil, the man that made it was in Dallastown, name was Ken Boyd, he drove around to all the grocery stores and drug stores and sold it to merchants. It was in a clear glass bottle, was yellow in color and had a label on it. (I think the liquid was light yellow, and the label was pinkish). I can remember seeing that in Mitzel’s grocery in Winterstown when I was growing up. Sometime in the late 50s or the 60s I believe regulations stopped the production of this product because of some of the ingredients; I’ve been told it had codeine in it but I’m not sure of that fact. After that Mr. Boyd had a small gas station at the west end of Main St. in Dallastown. I don’t know if there are any children. I was very fortunate to be able to contact some of the long time residents of Dallastown that also remembered Mr. Boyd. I was employed at Dallastown Service Center at that time. … it was a ‘tonic’ type of product, supposed to help a lot of different conditions, like upset stomach, etc.”

Gary Brown, who has collected Hanover memoribilia for many years, said he can’t confirm much about the oil itself, but says, “What I can give is the names of drug stores in the 1930s. Murphy’s Cut Rate Store – Pat Medicine at 29 Baltimore St.; Chas. M. Krumrine – Pat Medicine at 439 Baltimore St.; Smith Drug Store at 100 Broadway; Liggett Drug Store at 14 Carlisle St.; Baughman’s Drug Store at 19 Carlisle St.; Roy A. Stock Druggist in the North East Quad of center square. I think this was known as Myers Drug Store in more recent years.” Connie, maybe one of them is the store you’re thinking of!

Then I heard from Bob Rudisill, who writes, “When I was young (75 years ago) my parents would take a bottle, it was about 2″ wide and held about 1/2 gallon, to Evan’s Drug Store in 1400 block W. Market St. in W. York. They filled it with peppermint water and put cork back in; it did settle an upset stomach but did not have oil in it. My only thought is the oil was used to clean out what was causing the problem or have the person so busy going to the outhouse they forgot the bellyache.”

YIKES! I hope not. I do have to add my own memory here, of the “tonic” I had to drink as a kid at our doctor’s advice, called paregoric. This disgusting mess tasted like bitter licorice/anise and certainly did nothing to improve my upset stomach! It was later taken off the market as it’s an opiate, but boy, I didn’t suffer any of the GOOD side effects of the same, only the bad ones!

Jerry Warren actually thought of the same thing – he writes, “The secret ingredient in Mountain Oil wasn’t moonshine it was opium. When Junior was cranky, parents would diagnose stomach upset and give him Mountain Oil. Junior was quiet and happy and so were mom and dad. The same goes for Paragoric though it didn’t taste as good. Paragoric was available over the counter til the 70’s when enterprising hippies learned how to separate the opium.”

That said, the only “official” mountain oil recipe I received did not include that per se! It was from Pat Wise who writes, copied from a label:

Directions: 1 teaspoon in water every 20 minutes until relieved. Children 5 to 30 drops according to age.

Well, I’m thinking that would make me feel better (??)

Thank you all for sharing your memories! 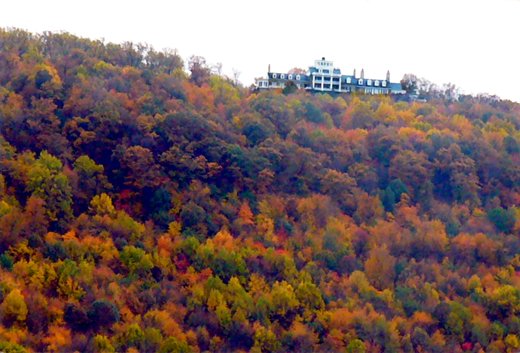 2. My family and I have always wondered what the huge structure is across the river from Marietta. We see it as we are coming down Route 743. It looks like a huge mansion. We tried to search for it on Google Earth but was unsuccessful. I am going out on a limb and asking some YDR staff if they happen to know. It looks HUGE and has to have some historical significance.
– Brooke Bensinger, Red Lion

High on the hill above Accomac Inn there is a large building, resembling a resort or hotel. It is visible from the east shore of the river in the vicinity of Marietta. Do you know anything about it?
– Carl Smith

This is kind of a “combined” question-and-answer today. I had wondered this myself – and even took photos, one of which you see here, hoping to do some further research, but never did much. Well, when cleaning my house the other day, I found the photos and realized they matched up with these question from Brooke and Carl, so I thought – let’s put it out there!

To be clear, the first and most basic answer to this question is that this home is a private property – so please, no trespassing to get a closer look! Our editor and historian Jim McClure believes the current or former owner was the former head of a local business, but I’m most interested in when it was built and by whom, rather than its present ownership!

3. We’ve talked about some of the previous businesses along Grantley Road a couple of times in the past, following a May question from Marion Trimmer.

Specific to one of those former businesses, Coastal Tank Lines, I have a couple of updates to share today.

Thomas Woodall writes, “Coastal was sold and moved to Akron, Ohio in 1968. The new company kept the Coastal name until it went out of business in 1986. I worked not only for the ‘old’ Coastal but for the ‘new’ Coastal too.”

And Joan Miller of Dover writes, “I was employed at CTL for 17 years. It was my first job after graduating from high school in 1950. Around 1967 they merged with a company from Ohio… some of my friends who worked with me still reside in the York area. Next to us on Grantley Road was the York Valite Co. and also a parking lot for Borg-Warner employees.”

I do have EVEN MORE on the former companies in this area to share in a future column, but wanted to get some of the info on CTL out first!

1 comment on “Ask Joan: Back from Washington, D.C. edition”