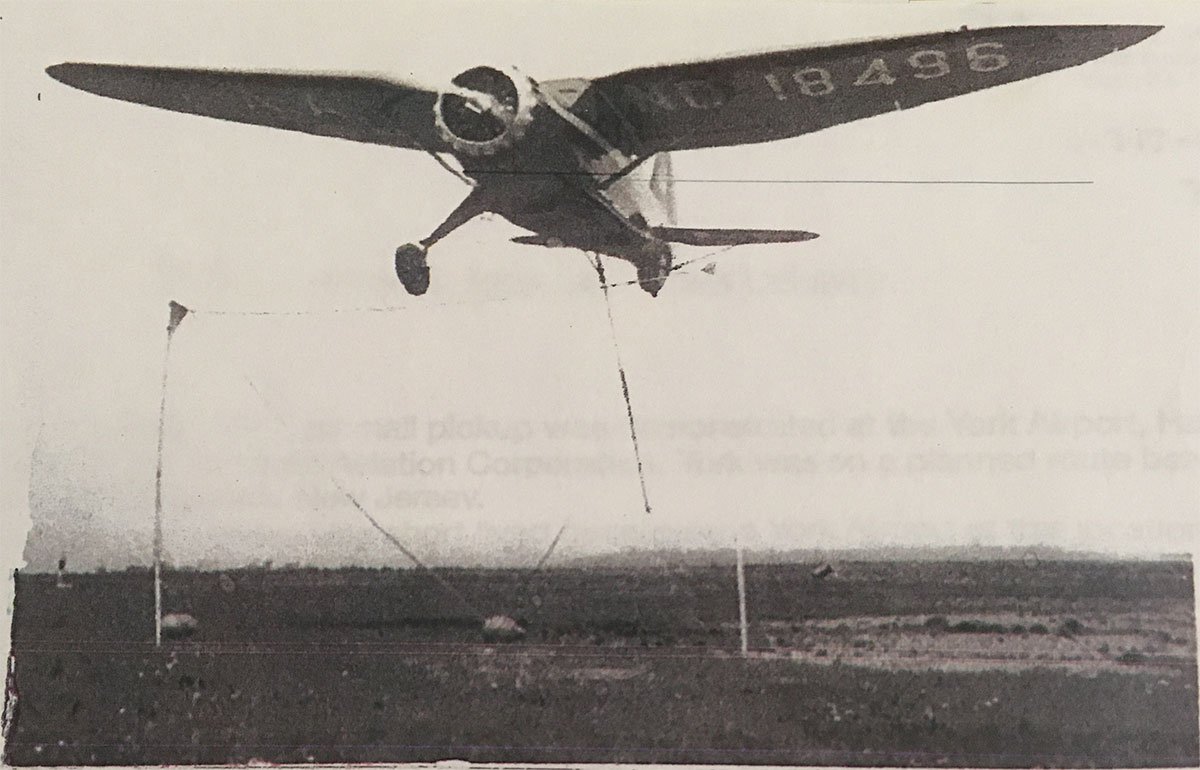 John F.M. Wolfe, author of "Profile of Aviation," shared this photo of All American Airways picking up mail at the York Airport in Thomasville with a Stinson Reliant airplane. The mail container on the ground between the two vertical poles is being picked up, and in the background, to the right of the poles, the dropped container is visible.
Posted by Joan ConcilioNovember 20, 2019November 20, 2019 Central/Eastern, Dover/West York, Local memories, Spring Grove1 Comment

Some time ago – in July 2017, to be exact – I wrote for the first time about York’s airmail service when reader Jean Scantling of Wrightsville asked about it. She remembered, in the late 1930s or early 1940s, seeing a plane drop a bundle of mail on a cable in a field near the Eagle’s Nest restaurant on Mount Rose Avenue in Springettsbury Township, then seeing the plane pull up the cable with a new bundle attached for future delivery.

Following that, I had a letter from Mary Myers Inners, who wrote with memories of a similar airmail dropoff and pickup at Pottery Hill, on West Market Street in West Manchester Township. Her father, Claude E. “Butch” Myers, had been an airmail delivery person starting in 1938, and upon his death in 1943, her aunt Beulah Sipe took on the job.

Well, after Mary’s letter, I heard from John F.M. Wolfe, one of York County’s top aviation experts. John is the author of “Profile of Aviation, York County, Pennsylvania,” first published in 1998, which details 50 airports in York and Adams counties.

You can imagine I was glad to hear from him on the subject of airmail!

John wrote, “On April 16, 1937, airmail pickup was demonstrated at the York Airport, Haines Road location, by Tri-State Aviation Corporation. York was on a planned route between Pittsburgh and Camden, N.J.”

He continued, “This airmail service was short-lived because the York Airport at this location closed in July 1937.” (I will note that this location – and the short-lived service – could potentially be what Jean could see coming down Mount Rose Avenue from East Prospect on her way to the city! You can read more about this location at yorkblog.com/yorkspast/airport-haines, in a column by Stephen H. Smith.)

John’s letter continued, “The next attempt for airmail pickup service for the York area was conducted on June 4, 1939. On this date, at 3:50 p.m., All American Aviation, Inc., made its first pickup at the York Airport at the new Thomasville, Pa., location, flying a Stinson Reliant, SR10C-NC21109.”

He continued, “All American Aviation initiated non-stop airmail pickup service for the Hanover area on July 2, 1939, with a mail drop and pickup in the morning and a return flight in the afternoon. This service was conducted at the Ray Devener airport in Hanover.”

In addition to that, John noted, “Probably the most remembered pickup site was Pottery Hill, located on the south side of Route 462, Market Street (West)” – this being the location Mary recalled. He added, “Other known pickup areas were York Airport (Roosevelt Avenue location), Valley Airways, the Winter air strip along Orange Street in West York and Bahn’s Dairy Farm, on the south side of Longstown Hill.”

He concluded, “Airmail pickup service probably ended in the early 1950s. Although it was faster than normal mail delivery, it was unpredictable since flying conditions were dependent on the weather.”

John, I am so grateful for this further information on York County’s airmail! It sounds like a great system, of course minus the aforementioned weather concerns!