You might remember that, during the Dover Fireman’s Fair in September, I mentioned you should check out the exhibit on former Gov. George Leader, the only Pennsylvania governor to date from York County.

Well, I got rained out of the Dover Fair myself, and I’m sure many others did, too. But I’m going to try to do the next best thing today and bring some information about Gov. Leader together online.

Tied in with this was my New Salem Antique Store Quest, in which I went digging around with my husband and took on the challenge to find three pieces of ephemera that I could turn into blog posts.

Well, the third out of three was a letter from Hubbard Farms, a breeder of New Hampshire chickens. It was written to thank performer Reg Kehoe, who provided entertainment at a dinner given by the poultry industry in honor of Gov. and Mrs. Leader in 1955. 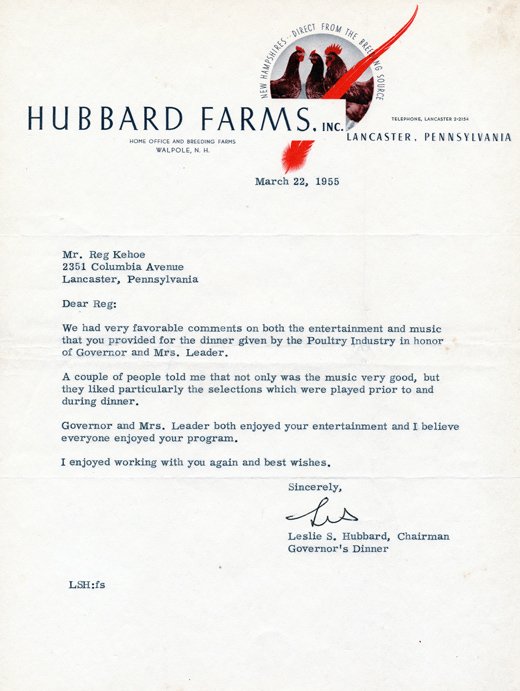 Inspired by this, and by a collection of photos shared with me by Jo Ott, who had been documenting much of the Leader exhibit at Providence Place, I decided to pull together a slideshow featuring some photos of Mr. Leader, including those as well as some pictures from our archives.

And as I was getting ready to write this, I realized that we just published, this past Sunday, a neat story by my friend Sue about a new book about Leader’s life. Take a look at that link to read more about former Gov. Leader (who, by the way, is still doing well at 93 years old) and about the book, “The Life of Pennsylvania Governor George M. Leader: Challenging Complacency” by Kenneth Wolensky and Gov. George M. Leader.

On a personal note, I had the privilege to speak with the governor on what was a very solemn occasion; I was writing a story on Gov. and Mary Jane Leader’s son Fred immediately following Fred’s death in 2003 due to kidney disease. I recall his graceful manner even at such a difficult time, and I’m glad to know that the recent book and the governor’s library exhibit at Providence Place do so much to honor someone so deserving.