Yes, that title is for real. And it’s brought to you by the former York Bank and Trust Company (one of several predecessors to the current M&T Bank.)

The 1962 booklet was produced by Morgan H. Wilt, 336 W. Philadelphia St., York, copyright 1962. Looks like Wilt produced them for the bank to distribute to its customers; the only ad is for the bank itself, on the back cover.

Here is the front cover (left) and the back cover (right). 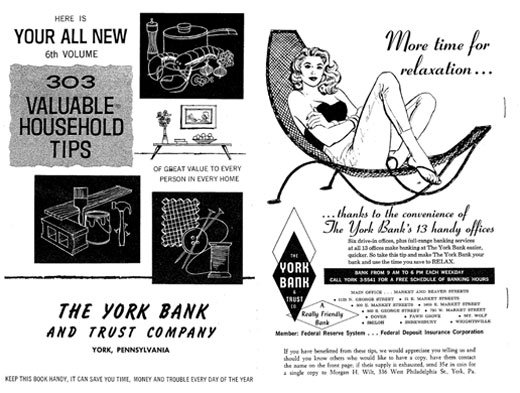 We (meaning mostly Hubby the ephemera guy) picked up this booklet over the summer at the Book Nook Bonanza held at York Suburban Middle School. One thing I was pleased about is that it was clearly used, presumably by a productive 1960s homemaker. How could I tell?

What led me to that conclusion is that many of the tips are marked with a pencil hash, I think the ones our homemaker either did use or wanted to try. That offers a fun peek into her life; among those marked: “142. Olive oil or nail polish remover will remove chewing gum from a child’s hair.” There was also “149. Many housekeepers are scouring their pots and pans with wads of used aluminum foil, instead of using steel wool.” Brings new life to the idea of the tinfoil ball, doesn’t it?

Here’s a look at an example page of the tips: 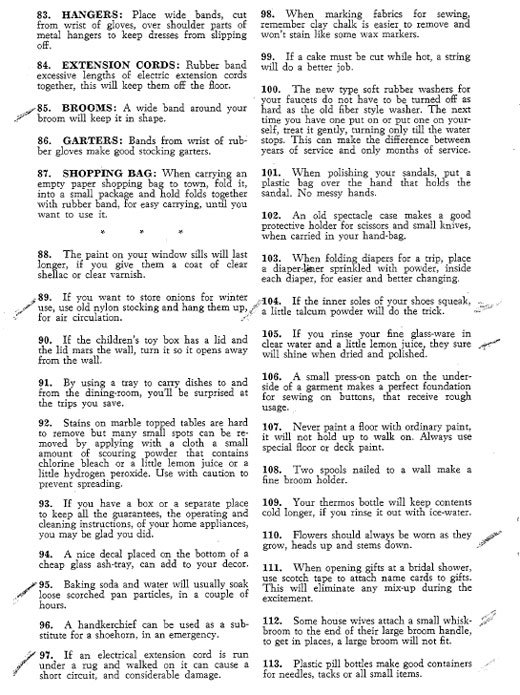 Thanks, York Bank, for publishing such a fun list of tips. It made a good follow-up to our Drovers & Mechanics Bank giveaway address book from last week. Why aren’t our current banks giving such fun stuff away? (Though I did get a lovely magnetic fridge clip from my bank at last weekend’s Women’s Show, to be fair.)