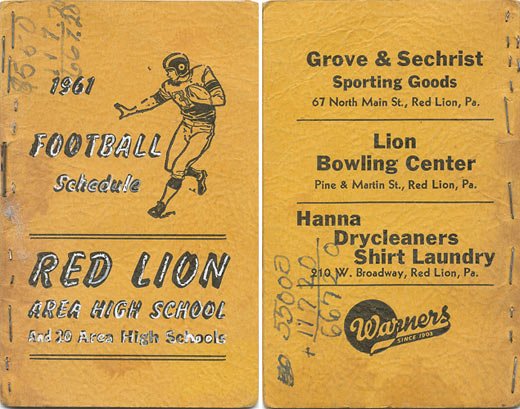 Today’s fun piece of York County ephemera is yet another find from my trip to The Biggest “Little” Flea Market in Hallam, and it’s incredibly timely as tonight marks the first of this year’s high school football games!

This 1961 football schedule from Red Lion Area High School is a gem – full of coaches’ names (some that I recognized, which was actually a little surprising), scores, handwritten notes, business names and more.

Above is a look at the front and back covers respectively; I especially like the back cover, which shows some of the team’s sponsors, Grove & Sechrist Sporting Goods, Lion Bowling Center, Hanna Drycleaners Shirt Laundry and Warner’s.

Inside, every team in the league is listed with their coach and seasonal schedule. The inside front cover features Red Lion’s junior varsity and freshmen team schedules and coaches.

Other teams included and their coaches were: 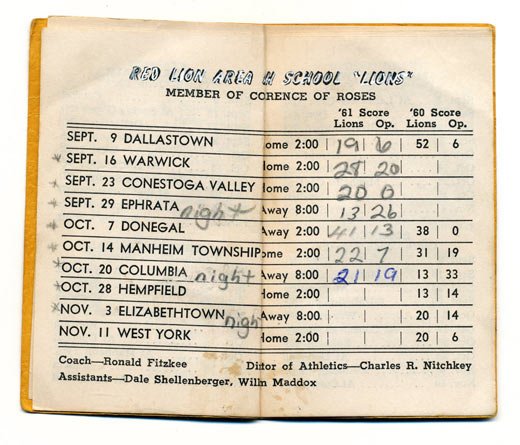 The best part of this booklet, though, is the centerpiece. That’s where Red Lion is featuerd, with its coaches listed: Ronald Fitzkee as head coach, Charles R. Nitchkey as director of athletics and Dale Shellenberger and William Maddox as assistants.

Even better, our book’s former owner did a good job of keeping scores on the games he attended, so we have a list of the results of the 1961 team’s first seven games, where they had a 6-1 record, losing only to Ephrata!

I loved getting a chance to celebrate the start of football season with this – and I hope you’ve enjoyed it too!

For earlier entries about my antique-store finds, check out these posts.