Jim McClure and I will be co-presenting a talk on the Underground Railroad in York County, Pennsylvania, at the February 15 monthly meeting of the York Civil War Round Table (250 E. Market Street, York; free admission and parking). I will discuss 10 sites/people who were conductors/stops on the secretive Underground Railroad network to freedom here in this county.

One of the people I will discuss is Joseph Garretson, a peaceful Quaker farmer turned activist in Newberry Township in northeastern York County. His modest farm saw one of the most tragic events in the history of assisting fugitive slaves/freedom seekers in this county.

Come on out to the YCWRT meeting and hear much more on Garretson and other brave conductors, for whom blindly obeying the federal Fugitive Slave Law meant far less than human compassion and basic morality. They were willing to risk their own freedom and finances to help fellow human beings in time of need.

Joseph Garretson and many of his neighbors attended the local Quaker meeting, which worshiped in a sandstone structure erected in 1811. The Lewisberry-Newberry area was a leading hotbed of Quaker thought and discussion, and hundreds of people, including many non-Quakers, flocked to the meeting house and other localities to hear debates on social topics of the day. At its peak, the area was second only to Kennett Square in terms of the magnitude of events. Topics for the lyceum included slavery, abolitionism, moral judgment, the impact of sin on the world, and many others.

Nationally known guest activists such as abolitionist William Lloyd Garrison came to Lewisberry to participate in these forums. He became personal friends with many of the Quakers of the region and helped Joseph Wickersham and others rescue a young black female who had been recaptured by bounty hunters.

Joseph Garretson likely knew Garrison as well.  Garretson was born in York County on March 23, 1789, one of nine children of Joseph and Mary Garretson. He owned a farm a couple of miles east of Lewisberry along what is now known as Old Quaker Road. His father had died in 1814, and the younger Joseph had assumed a leading role in the family and in the local Quaker community. He married Mariah McMillan, a relative of his mother, in October 1816. They would have five children, all girls.

Joseph would often shelter runaway slaves on his farm, putting them to work and paying them wages. His activities became fairly well known, and four men from Conewago township, members of the Fetrow family, decided to make some money at Garretson’s expense.

Their actions led to the death of a freedom seeker who had found shelter and acceptance from the Quaker and his family.

Here is the story as taken from my recent book, The Ground Swallowed Them Up: Slavery and the Underground Railroad in York County, Pa.

“Joseph Garretson employed a runaway slave named George as a hired hand. Thomas H. Gist, a wealthy planter from Baltimore County, offered $100 for George’s return. In August 1824, four members of the Fetrow clan — brothers Michael and Mathias, and Michael’s sons Samuel and Henry from the Quickel’s Church area of Conewago Township — heard about the impressive reward money. They apparently knew that the suspected fugitive worked for Garretson and decided to seize him. “Swaggering and feeling the effect of potations,” they rode north to Garretson’s farm. Armed with heavy fowling-pieces, they approached the Quaker and demanded that he hand over George to them. As evidence of their authority, they produced a printed advertisement giving his description and offering the reward. They searched the outbuildings without success. They told the farmer they must also search his house because they were confident the slave was hiding or being concealed there. Garretson and his family members were greatly disturbed, but as practicing Quakers they did not resist with force as some of the strangers began searching their residence.

“Meanwhile, George was hiding upstairs in the Garretson’s plain, red sandstone house. Hearing the commotion below, he crept to the east garret window and leaped to the ground some 22 feet below. He fled into a nearby cornfield, but the Fetrows spotted him and discharged their weapons. Lying in pain, George surrendered and was quickly bound. He was carried in agony into the barn and placed on a truss of straw, where sixteen buckshot pellets were removed from his body. The Fetrows took him back to his master and collected their money. George reportedly later died of his injuries. Garretson informed the authorities about the incident. On January 11, 1825, the kinsmen appeared before the Court of General Quarter Sessions of the Peace in downtown York on charges of inciting a riot, assault and battery, and assault with intent to kill. Their attorney insisted that the advertisement presented sufficient proof that George was indeed a slave. However, the judge ruled that the printed paper conveyed no authority to the Fetrows. The jury found Michael, Mathias, and Samuel guilty on all charges but acquitted the youngest defendant, Henry. The judge fined each of the guilty parties $20 for the riot charge and $14 for the assault and battery. They also had to pay court costs, but none of them served jail time. In total, they had to pay almost $180.”

See you on the 15th to hear more on the conductors of York County?

Seven regional experts on the Underground Railroad will be speaking at a once-in-a-lifetime event, Paths to Freedom: A Regional Underground Railroad Symposium on March 31 and April 1, 2017, at the York County History Center. Admission is a modest $15 for members and $20 for non-members and includes snacks, beverages, and a delicious lunch, as well as a guided tour of the Goodridge Freedom Center. 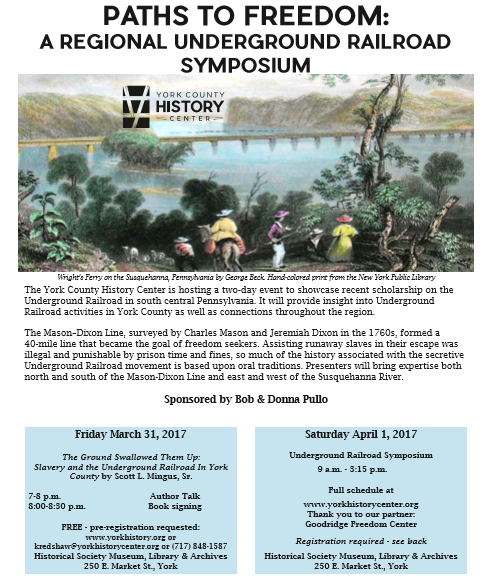