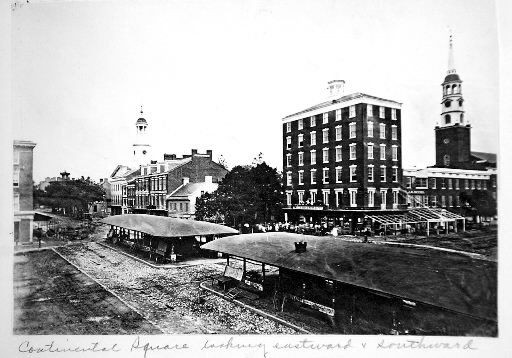 In a recent Cannonball blog post, I discussed how the national Republican partisan press often pilloried David Small. The ardent Democrat was the chief burgess of York, PA, during the Civil War. Small also owned and edited the leading Democratic newspaper in the region, the York Gazette. He was a prominent and well respected leader, except, of course, to Republicans who opposed him.

Small was no stranger to political controversy. Well after the war years, he had to repeatedly defend his decision to ride out several miles on the turnpike to surrender York to an oncoming enemy general during the June 1863 Confederate invasion. In October of that year, he again made national news when  newspapers across the North repeated a story of more of his highly partisan antics. It opened York up to ridicule, particularly in the Republican press. Small strongly supported Judge George Woodward, a “copperhead” Peace Democrat, in the fall election for governor of Pennsylvania. Woodward was trying to unseat incumbent Republican Gov. Andrew G. Curtin, an ardent supporter of President Abraham Lincoln and his war policies. The fiery Small took his anti-Curtin feelings a step too far and narrowly avoided a thrashing as a result.

Here is the brief story, as taken from the October 13, 1863, issue of the Cleveland (Ohio) Daily Leader.

“The chief burgess of York, Pa., who walked 18 miles to surrender the town to the rebels at the time of Lee’s invasion, undertook to silence some soldiers who hurrahed for Curtin. But they pulled his hair and nose, and he was only saved from a tremendous beating by calling in the constables.”

The article was flawed and inaccurate in that David Small had not walked 18 miles to surrender York; he had ridden in A. B. Farquhar’s carriage with several other town leaders half that distance to meet with Confederate Brig. Gen. John B. Gordon of Georgia. Still, despite the exaggeration and “fake news,” to use a modern politically-charged term, Small was now a target for the Republican press who scrutinized his actions and oft repeated his perceived miscues.

Despite his somewhat soiled reputation, Small remained popular in York and was easily re-elected multiple times during and after the Civil War.