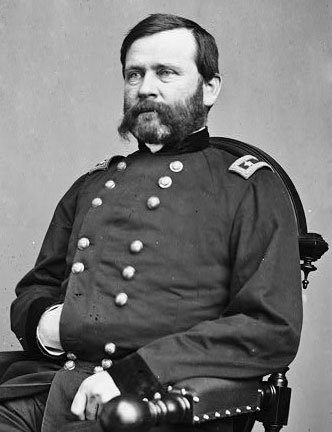 William Buel Franklin was the highest-ranking officer from York County, Pennsylvania, during the American Civil War. Now largely forgotten by the general public, in his day Franklin’s name was prominent in leading newspapers frequently during the war. Born in York on February 27, 1823, Franklin came from a prominent Pennsylvania family with long political ties. One of his great-grandfathers was a member of Continental Congress during the American Revolution. William’s father, Walter S. Franklin, served as the clerk of the U. S. House of Representatives from 1833 to 1838 during parts of the Jackson and Van Buren administrations. A family friend, Senator James Buchanan, appointed Franklin to the United States Military Academy, from which he graduated first in the Class of 1843.

He served in various posts as an engineer, including supervising the construction of several light houses along the Atlantic Ocean in the Northeast. For a period of time, he oversaw the construction of the dome of the U. S. Capitol building. When the Civil War erupted, he soon became a brigadier general of volunteers. By the time of the battle of Fredericksburg in December 1862, he was a major general in charge of the Left Grand Division (the First and Sixth Army Corps).  When Joseph Hooker assumed command of the Army of the Potomac, Franklin resigned and eventually went home to await further orders. He was in York shortly before the Confederate invasion in June 1863 and helped advise the local leadership, as well as Governor Andrew Curtin.

In 1864, he was back in the field in the Trans-Mississippi Theater commanding the Nineteenth Army Corps. He suffered a painful leg wound at the battle of Mansfield, an injury that worsened and forced him to turn over command and take a medical leave. In early July, he left Washington, D. C., by train for Baltimore after visiting General Ulysses S. Grant in Virginia. From there, on July 11 Franklin boarded the cars of the Philadelphia, Wilmington & Delaware Railroad for the ride up to the City of Brotherly Love. Dressed in civilian attire, he could little imagine what would transpire next. Rebel raiders attacked the train near Magnolia Station northeast of Baltimore, and Franklin soon found himself a prisoner of Confederate officer Harry Gilmor, a daring Marylander in gray.

Here is the story from the July 19, 1864, pages of The Daily News, a leading Milwaukee paper.

“There was no doubt in the mind of General Franklin, from the rebel interrogation, that he had been pointed out to the rebels by some of the passengers.

“The rebel Colonel said: ‘General, I am happy to see you.’

“The General replied: ‘I cannot say that I am pleased to see you under the circumstances.’

“About ten minutes afterward Harry Gilmor came into the car, and addressing himself to General Franklin, said: ‘General you will consider yourself my prisoner.’

‘Gen. Franklin was then put into a carriage, and with other prisoners, driven through the country, stopping a while at Towsontown, and then moving across to Reistertown, where they arrived about one o’clock on Tuesday morning and immediately bivouacked for the night.

“The General was put into the custody of Capt. Owens and two guards, who were charged with his safe keeping. Expressing himself as sick and weary, he immediately laid down and feigned sleep. Soon the captain and his guards laid down, and he [Franklin] listened anxiously for indications of sleep on their part. He had not to wait long before he heard the guard nearest to him commence to breathe heavily, momentarily increasing in volume and profundity, until it became sufficiently loud to wake an ordinary sleeper.

“The captain and the other guard had, in the meantime, also commenced to breathe rather heavy, and the general continued with his ears open, to feign sleep. He laid in this way for some time, until all three gave unmistakable signs of sleep. Fearing that they were playing ‘possum,’ he got up and walked carelessly around them, moved over to the fence and still noticed them. He then coughed loudly and made considerable noise thinking that they wanted an excuse to shoot him, as each man was laying with their right hand grasping the muzzles of their guns.

“The indications of profound sleep being so unmistakable on the part of all three of them, he now thought he would test the sincerity of their slumbers by jumping the fence. This he did, and on looking back could see no movement of the dusky forms of his guards, and off he shot across several fields, jumping the fences and keeping straight ahead in the direction he thought would take him towards the city [Baltimore]. He ran about three quarters of an hour, when he entered a thick wood, and in his weary state, being really broken down by fatigue sought a place of concealment.

“He remained concealed for the balance of the night and all the next day, frequently seeing from his hiding place the rebel scouts searching for him, and scouring the bushes and the woods.

“Finally, about sunset, almost famished for water and food, he ventured out, having come to the conclusion that freedom and starvation was nearly as bad as being a prisoner.

“He still kept in the woods, however, and soon saw two men moving towards him, carrying large bundles of hay. He walked up to them and asked what they were doing with hay in the woods, when one of them replied: ‘We have had our horses in the woods, to keep them out of the hands of the d—-d rebels, and we are going to feed them.’ This reply was a sufficient indication of their sentiments, and he immediately made known to them the circumstances of his presence in the woods, and who he was. They treated him most kindly and cordially dropped their hay and conducted him by a secluded route to their farm house, where he was most kindly and hospitably received by the family. Being in a neighborhood surrounded by rebel sympathizers, and some of the rebel scouts still prowling around apparently watching for him, his whereabout was kept a profound secret by his loyal host, who on Wednesday, set about devising means of getting him to this city. This he accomplished, and at midnight last night a carriage [and Union cavalry escort] went out from the city and returned with the General, feeling, as he expressed himself, more free than he had ever before felt in his life. [“Mr. B” took Franklin early on the morning of July 14 to the Barnum Hotel in Baltimore to rest and recover.]

“The name of this gallant and patriotic Maryland farmer is at present withheld, for the reason that he has reason to fear rebel retribution should any more of the highwaymen of Harry Gilmor, be still in the neighborhood.

“The General is preparing to leave this morning again for Philadelphia, to join his family in York, Pa., where he will spend a few weeks to recuperate his shattered health. — Baltimore paper.”

Blogger’s note: Major General  Wm. B. Franklin never again held an active field command. He spent the remaining nine months of the war at a desk job. After the war, he became president of the famed Colt Arms Company in Hartford, Connecticut. He died in March of 1903 and is buried in York’s Prospect Hill Cemetery.