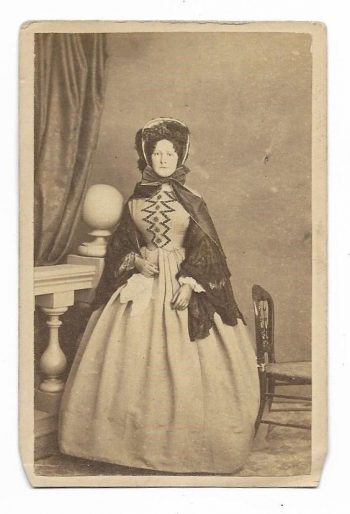 Many long-time Cannonball readers are aware that I collect vintage carte-de-visites (CDVs) of York Countians during the Civil War period. Occasionally, I locate examples that are of known subjects but usually the person unfortunately remains unidentified. I recently acquired a pair of CDVs that have names written on the reverse in pen. In those cases, I can often match their stories to the image.

The above photograph is of Virginia E. Codwise, who was about 20 years old when she posed for the portrait in the studio of Lochman & Shoemaker in Centre Hall on the square in York, Pennsylvania.

Here is a short biography of her, along with a pair of brief mentions of her stepmother taken from one of my Civil War books, The Louisiana Tigers in the Gettysburg Campaign (LSU Press, 2009).

Virginia was the oldest daughter of Dr. George Washington Codwise, a prominent resident of York during the Civil War years, and his wife, a member of the Taylor family.  He was the son of New York-born planter and sea captain of German ancestry in St. Croix in the West Indies, where he was born September 9, 1800. He graduated from Union College in Schenectady, New York, in 1822. Three years later, he matriculated from the medical school at Columbia University in New York City. Immediately after graduation, Codwise joined the Navy as a surgeon’s mate and served in various capacities, including on board the USS Ontario and USS Falmouth. Two daughters, Georgiana and Virginia, were born in Virginia (1843 and 1845 respectively) while he was assigned to the Navy Yard at Norfolk.

Codwise remarried to Louisa Charlotte Beatrice Janin de Mertz, a Swiss-born woman, and settled in York, Pennsylvania. There, their son, George A. P. Codwise, was born on September 5, 1859; six other children were born in York over the next few years. He sent his two oldest daughters to the Moravian Seminary for Young Ladies in Bethlehem, Pennsylvania. The sisters were members of the class of 1860, the same year that war clouds loomed after the November election of Abraham Lincoln as president of the United States.

After retiring from the Navy on April 30, 1861, Codwise returned to York to be with his family. G. W., Louise, and some of their descendants attended St. John’s Episcopal Church in downtown York for many years. After war erupted, he returned to the Navy.

At some point during the war years, likely about 1863, young Virginia posed for the above photo. Here is the reverse, showing the imprint of Lochman & Shoemaker. It remained in the family through the descendants of her younger sister Georgiana Rebecca Earle (Codwise) Eichelberger and other owners until I acquired it in a recent on-line auction.

During the Confederate occupation of York in late June 1863, Dr. Codwise’s second wife, Louise, openly entertained Confederate soldiers from Louisiana. They were members of the feared Louisiana Tigers but Mrs. Codwise showed them compassion. As I write in my book on the Tigers, “In the Tigers’ camp along Codorus Creek, soldiers relaxed and entertained guests from the town. Private Charles Moore Jr. of the 5th Louisiana commented about the particular hospitality of Mrs. Dr. Codwise and Miss Georgia Bird and noted the Copperhead sentiment of the people who came out from the town, which he deemed a ‘lovely place.'”

Moore later added in his diary, “Detailed for patrolling and feasted on cherries.” He watched as North Carolina soldiers from Avery’s brigade torched several railroad cars at York’s freight yard and then he went sightseeing with a friend. “Lieutenant [George H.] Henchey and I spent the evening at Mrs. Codwise’s and tramped around town. The town clock struck 12, then we left for camp.”

Do any Cannonball readers have more information on Virginia or the other members of the Codwise (Codweise, in the original German spelling) family? If so, please post a comment.