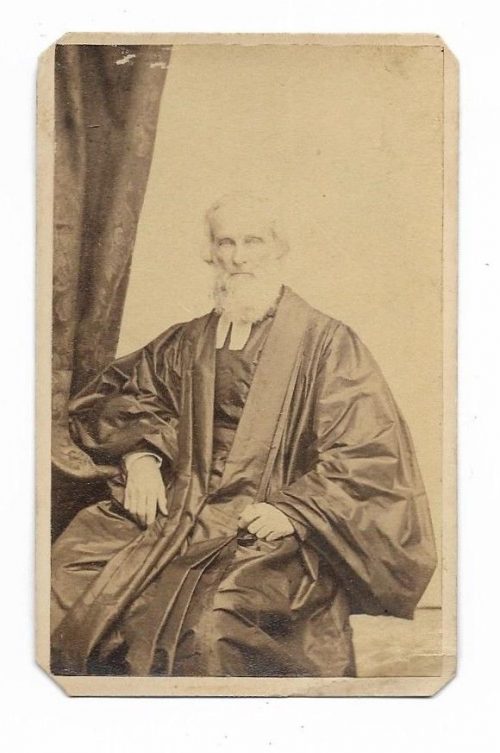 As I mentioned in my last blog post on Virginia Codwise, I have recently acquired a pair of identified CDVs of people who lived in York, Pennsylvania, during the American Civil War (1861-1865). These two images augment my personal collection of images of citizens taken at York’s bevy of photographers during the war years.

In addition to the Virginia-born Miss Codwise, who was about 20 years old when she posed in the studio of Lochman & Shoemaker, the Reverend Charles West Thompson also visited the same photographer’s office in Centre Hall, a multi-story emporium on the borough’s square. His photograph appears to have also been taken about 1863. There is a different head shot taken that same year in his native Philadelphia of Thompson in the collection of the Free Library of Philadelphia.

Here is some background information on the Reverend C. W. Thompson, one of the pillars of York’s religious and social life for more than two decades in the mid-19th century.

Charles West Thompson, a long-time Philadelphia clergyman and prolific writer, was admitted to the order of deacons in the Protestant Episcopal Church on December 18, 1845. By that time, he was widely noted for his eloquent poetry, which appeared in many newspapers across the country in the 1830s and 1840s. An article in the February 17, 1840, Adams Sentinel in Gettysburg, mentioned a recitation Thompson gave at Pennsylvania College (now Gettysburg College) that left the large audience “in breathless silence, during its delivery… He not only spoke as a Poet, but he looked one.”

In 1837, Thompson was among a group of 28 prominent writers and educators that formally petitioned the House and Senate for stronger copyright laws. His fellow signatories included Henry Wadsworth Longfellow, future Civil War officer and Gettysburg hero Rufus Dawes, Samuel F. B. Morse (the inventor of the telegraph and namesake of the Morse Code), and Harvard President Cornelius C. Felton (whose brother Samuel Morse Felton was the president of the Philadelphia, Wilmington & Baltimore Railroad in the Civil War).

From 1847 to 1848, Thompson pastored Cavalry Episcopal Church in Rockdale in Delaware County, Pennsylvania. He became the rector of York’s St. John’s Protestant Episcopal Church in 1849. He began a decade-long program of building and grounds improvements, including adding a tower in 1862. A chronicler in the diocese later wrote, “His sermons, rich in scriptural truth, bore witness also to his taste and culture, and his delivery in the Pulpit and in the Desk gave him distinction as a speaker of no mean degree.”

When his declining health, never robust, precluded him from continuing in the pulpit after 17 years, he resigned in 1866 as rector. He remained on a salary as an in-house missionary, his needs fully paid for by an admiring congregant. C. W. Thompson remained a faithful and active parishioner at St. John until his death in April 1879 at the age of 84. Prominent newspapers such as the New York Times and Boston Globe mentioned his passing. The diocese historian noted, “He went to his grave at a ripe old age, retaining the reverence and affection of the community in which he had lived for thirty years until the last.”

Here is the reverse of the CDV from my collection and, following it, an image of one of his more popular poems in the 1840s about being thankful at harvest time (well before President Lincoln formally declared the fourth Thursday in November as “Thanksgiving”). 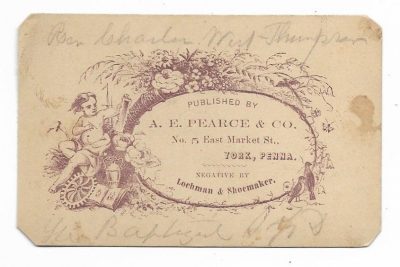