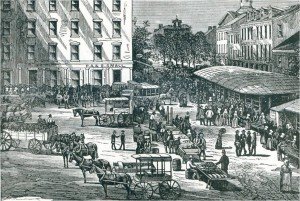 Scene of downtown York, Pennsylvania, in the mid-19th century. David Small served as the chief burgess during the Civil War. He was also the owner of the local Democratic newspaper, the York Gazette.

Republicans naturally had little kind to say about Small and his controversial policies, particularly blaming him for surrendering York to the Rebels during the Gettysburg Campaign.

One leading York Republican penned a note to his party’s house newspaper, the Harrisburg Evening Telegraph, in October 1863 complaining again about Small.

Here is the newspaper clipping…

“At a copperhead conclave in the borough of York, last week, one of the tories who harangued the crowd, went off into the abuse of Gov. Curtin.  A party of soldiers who were present, remonstrated against this, when it was repeated, and when the soldiers showed their disapproval by cheering for Curtin and hissing the foul-mouthed slandered who was traducing the man whom they honored.

At this the burgess of York, one Mr. Small, had the soldiers arrested and placed in the lock-up. When the commander of the brave fellows thus imprisoned was apprised of the fact, he demanded their release. This was at first refused, but on its being repeated the Burgess relented and the soldiers were released. This is the style in which copperhead officials treat the soldiers who dare avow their preference for Curtin.

It will be remembered that this Mr. Small went out in pursuit of the rebels as they advanced on York last summer, and that he is the mean coward who eat[s] dirt at the feet of the traitor invaders. He is therefore engaged in fitting work, when he imprisons the soldiers of a loyal cause for manifesting their preferences for a loyal Governor.”