York residents flocked to local photographers during the Civil War 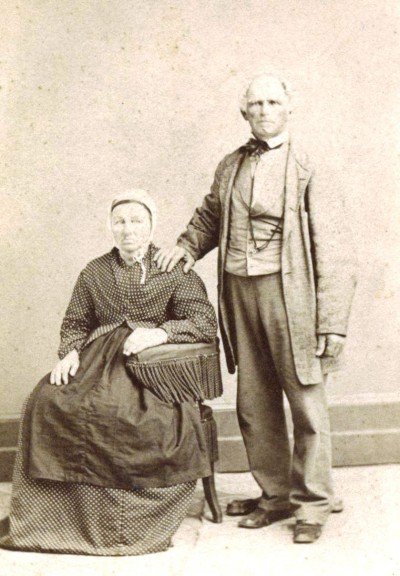 Photography originated in Europe in the early 1800s, with a variety of techniques of using light-sensitive chemicals spread onto a substrate such as paper, leather, pewter, or a glass plate. The resultant image often took hours to develop, so most of the earliest remaining photos are of landscapes or other static subjects. In October 1839 a Philadelphia photographer and chemist named Robert Cornelius took what is generally regarded as the first image of a human being in America when he posed in front of his family’s gas and lighting store. Within two years, he had opened a studio to take photos of others.

It proved to be a growth industry, although Cornelius lost interest and returned his focus to the family business. However, scores of men learned the techniques and began taking commercial photos. In March 1842, itinerant photographers John C. Stinson and Blanchard P. Paige rented rooms above Cook’s Jewelry on South George Street and took what are credited as the first photos in York, Pa. In 1845 William Wagner opened York’s first studio. In April 1847, Richmond-based Joseph Reinhart traveled into York County to take daguerreotype images (produced on a silver-coated copper plate) of the locals for a fee. Renting a room on the third floor of the China Hall, the Virginian also advertised that he would instruct people in the art of “Daguerrotyping at reasonable prices.” He departed in June 1847 for other venues.

In the 1850s, photography became more affordable and readily available, and hundreds of studios dotted the business directories of American cities and towns. In York County, the two main towns, York and Hanover, each boasted photographers during the war years. The largest concentration was in York, where Glenalvin J. Goodridge, the son of a free black barber and reported Underground Railroad conductor William C. Goodridge, was among the earliest photographers. He took over the space vacated by Reinhart when the latter moved on and established a studio in York. He later moved his business to his father’s house on E. Philadelphia Street and later to a dedicated room in his father’s emporium in “Centre Hall” on the town square at the intersection of Market and George streets. He became noted for his well composed ambrotypes (positive photographs on glass made by a variant of the wet plate collodion process; these were usually less expensive than daguerreotypes).

Goodridge’s early competition included J. Thomas Williams who moved up from Baltimore and advertised himself as the only full time photographer in York (a dig at Goodridge’s second vocation as a school teacher). He moved away in 1857 during the national economic crisis which also threatened the Goodridge family’s prosperity.

By the time of the Civil War several full-time photographic studios operated within a block or two of Centre Square. 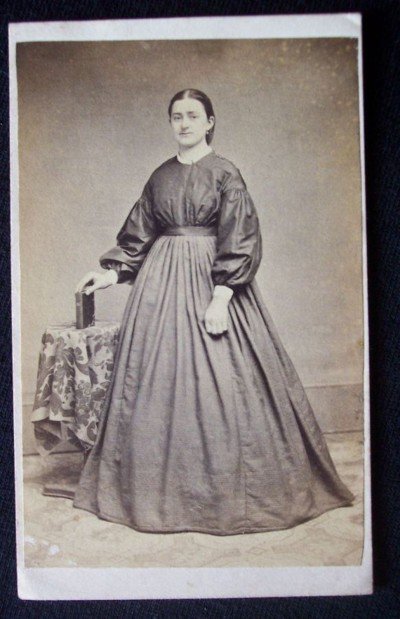 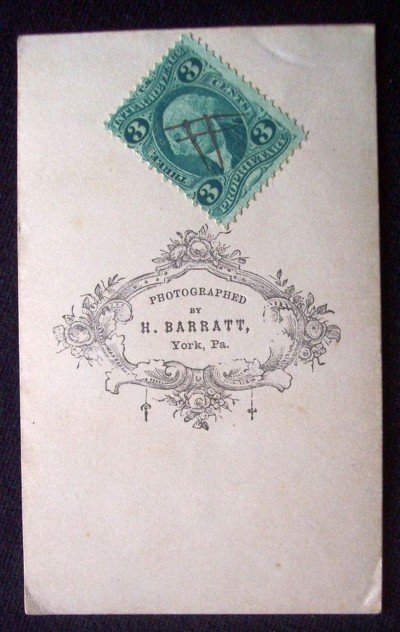 Among the leading studios in downtown York during the Civil War was that of Henry Barratt, who took the photo shown above of this now unknown York County woman (all images are from the private collection of Scott Mingus). In the summer of 1857 Barratt established his “Sunbeam Gallery” in the Hartman emporium on the southeastern side of the square, opposite Goodridge’s establishment, and began selling low cost tintypes. He moved his studio in 1861 to a different location and Glenalvin Goodridge assumed the Hartman location. With the proximity to the Camp Scott training base (and starting in 1862 the U.S. Army General Hospital), York’s photographers had plenty of customers.

A subsequent act in 1864 added more items, including matches and photographs, as well as raising the income tax level imposed by the Internal Revenue commissioner. The affixing of a stamp and its cancellation confirmed that the required tax had been paid. These stamps help date period photographs to the 1864-65 time frame. The amount of tax depended upon the price of the item, so with most photos costing between 25 and 50 cents, the most common stamps are 2 and 3 cents although late in the war the tax was reduced to a penny. 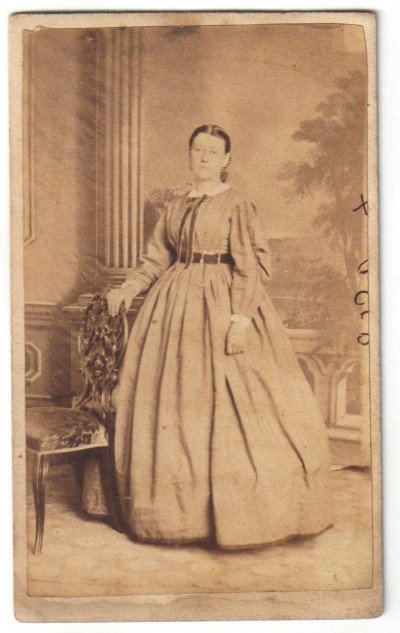 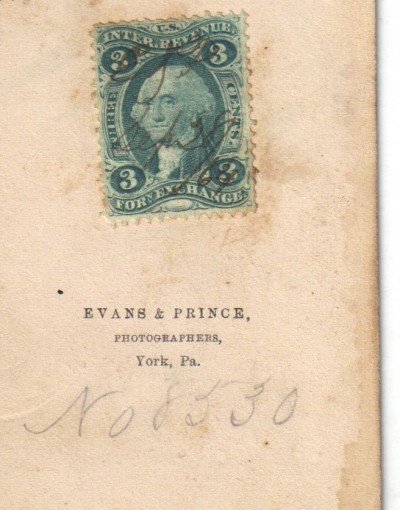 Another prominent studio in York during the Civil War years was Evans & Prince. The Scottish-born Fitz James Evans Sr. was a Philadelphia transplant who established a studio in partnership with Seiling in 1858. They founded their low cost business in J. T. Williams’ former studio near the post office. Within a few years Evans had a new partner, a man named Prince, and was flourishing.

Note the “No. 8530” penciled on the reverse of this tax-stamped CDV. This corresponded with a catalog number by which other copies of the print could be ordered. Unfortunately, the catalog of Evans & Prince apparently no longer exists, so it is impossible at this moment to identify the woman in the photo. Hundreds of Evans & Prince images survive; they can occasionally be found at local antique shops and shows.

F. James Evans Sr. later joined a mining syndicate and moved to Mexico, where he died and is buried. His oldest son and namesake was the purchasing agent for many years for the A. B. Farquhar Company and a member of the school board and library board before his untimely death in 1898 at the age of 40. Several of the senior Evans’ descendants still live in York County. 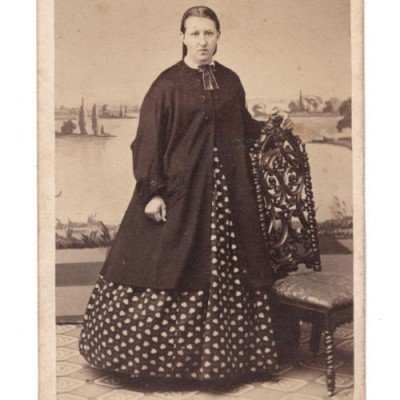 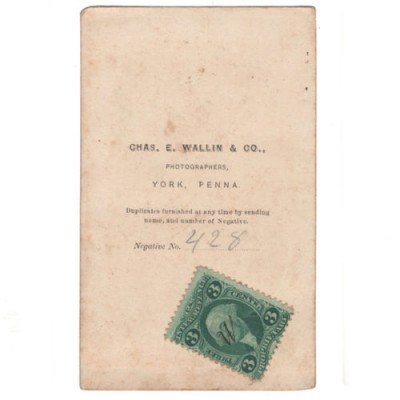 Charles E. Wallin and his “Temple of Art” was another well known studio in downtown York. He advertised himself as a “premium photographer,” perhaps as differentiation with the lower cost Evans & Prince studio. As with his chief competitors, his catalog with the potential identification of his now unknown subject has not been located.

C. E. Wallin was born in New York in 1829. After the war, he joined the newly formed National Association of Photographers, an early trade association.He moved to Fort Wayne, Indiana, in 1868 and established a new Temple of Art on the third floor of Hamilton’s Bank, opposite the courthouse. He moved his studio in 1874 to the “Photographic Gallery of Art” at 18 W. Berry Street in Fort Wayne. It was in Fort Wayne where he met and married his young wife Emma (born in 1853). They raised a son, Charles M. Wallin.

Wallin left town in 1877 and finally settled in Selma, Alabama, where in the 1880s he was an executive in the Amateur Photographic Association, a group of regional professional photographers which helped the general public learn to take better photographs.  His wife Emma died at home in July 1900 of nephritis. She was buried in Lindenwood Cemetery in her native Fort Wayne after a service attended by her husband, son, and brother. Charles  in 1902 received “a beautiful Bristol fish rod” from Recreation magazine in recognition for bringing in several new subscribers. 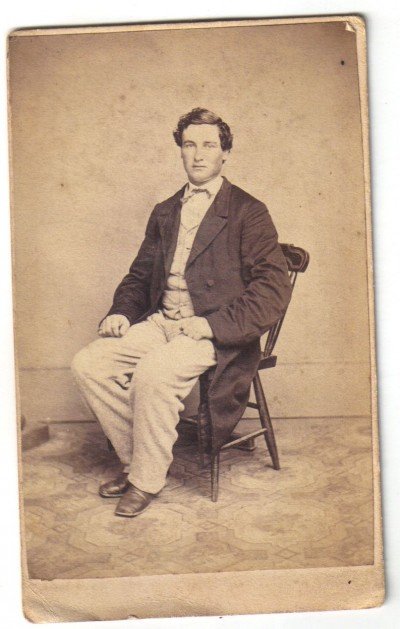 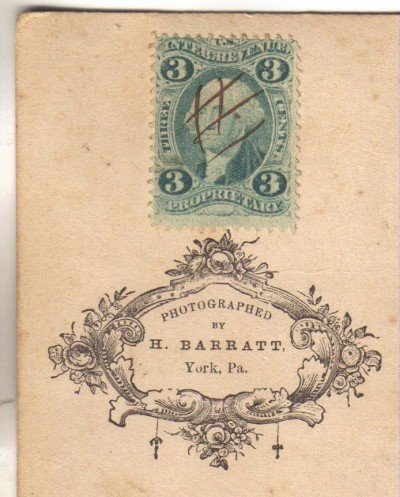 Another Henry Barratt photo from the personal collection of Scott Mingus

Another firm operating in York during the Civil War was Lochman & Shoemaker, who had taken over the space in Centre Hall vacated when Glenalvin Goodridge moved across the street to the Hartman building. Few of their photos are known. One example can be seen here. The proprietors were William Lochman and William C. Shoemaker, a Philadelphian. The business apparently did not last very long.