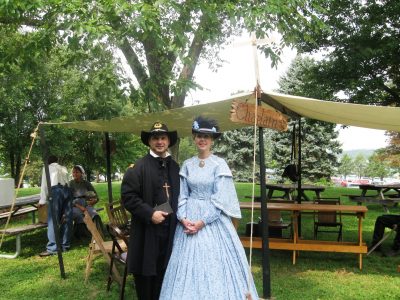 Living historians Rene and Rommi Kinard of Hanover, Pa. portray a Civil War chaplain and his wife. They are fixtures at many reenactments in south-central Pennsylvania and the general region. Rene will frequently hold preaching services in his tent on Sunday mornings for other reenactors and the public, including at the 2010 Civil War event at Codorus State Park near Hanover (when this photo was taken).

Chaplains became quite common during the Civil War serving in the field with the armies. Many regiments had their own designated chaplains, and often there were brigade chaplains as well as or instead of regimental clergy. Most were licensed ministers from churches in the region where the regiment was raised or organized. The chaplains offered spiritual comfort and admonition, and at times stayed behind to minister to the wounded.

The 130th Pennsylvania was primarily raised in Cumberland and York counties (companies B, C, I, and K came from York County) in August 1862 under the command of Col. Henry I. Zinn of Cumberland County, with York’s Levi Maish as lieutenant colonel. Brigaded with the 108th New York and 14th Connecticut (equally raw recruits).

With nearly 1,000 men in the ranks initially, the chaplain of the 130th had his work cut out as he ministered to the young men, many of which were going away from home for the first time. Some would never return.

According to researcher Dennis W. Brandt, the 130th Pennsylvania’s first chaplain was George Wilson Chalfant, who mustered in October 1862. Things apparently did not go well for Rev. Chalfant because, on January 3, 1863, he attempted to resign. His stated reason was that “recent events have transpired in my pastoral charge impairing and threatening to destroy it.” Four days later, Maj. Gen. Edwin Vose Sumner denied the resignation and ordered Chalfant dishonorably discharged.

George Major Slaysman was a prominent Baptist minister who spent many years living in York, Pennsylvania, after the Civil War before retiring to Mount Union in Huntingdon County (west of Harrisburg).

Slaysman was born in Lewiston, Pa., on March 9,1822, the son of George and Anna Major Slaysman. The family later moved to Punxsutawney, where Slaysman lived as a teenager. A history of Jefferson County recalls that he “was the pioneer teacher of round notes — the do re mis — in the county.”

He entered the Class of 1846 at the Hamilton Literary and Theological Institution (later Madison University) in Hamilton, New York. He then practiced dentistry from 1846 to 1851 in Hollidaysburg. In 1848 he married Mary Barton Diven, a young woman from Shirleysburg.
In August 1850 the young dentist visited York and, according to 19th century historian George R. Prowell, “found an enterprising and wealthy town of 8,000 inhabitants. Dr. Slaysman found some Baptists but they had no place of meeting and held no services This so impressed him that he gave up a lucrative profession in Hollidaysburg, Pennsylvania, and returned to York in November to establish a Baptist Church.”

He organized a church of eleven members and preached in a hall rented and fitted mainly at his own expense (he rented a large assembly room in the Hartman building downtown, which was fitted up with seats and a pulpit). John Hartman provided a Bible and donated the hall, rent-free, for a year. The congregation, which included three men and eight women at the time, became affiliated with the Central Union Association in 1851 (two of the first members were black; the others white in an era when few churches were integrated). Slaysman was ordained in Williamsburg as a Baptist minister on Jan. 16, 1851.

In 1852, Slaysman finished the lecture-room of a meeting-house on the corner of South George and Baptist Alley, between Princess Street and College Avenue. He also constructed a parsonage, doing much of the carpentry himself. He organized the first Baptist church in Stewartstown in 1856 and was very active in the American Baptist Missionary Union, an intra-denominational group that met in Philadelphia annually to support foreign missionaries.

According to the history of the First Baptist Church of York, “At the outset of the Civil War the church was used as a barracks for the Pennsylvania Army unit called the Duquesne Grays. When ordered to the front, the soldiers inquired about their bill for using the church, but Rev. Slaysman told them there would be no charge. After their departure, they sent the Communion Table Bible, which the congregation still uses today.”

Slaysman also played a prominent role in creating the U.S. Army Hospital on Penn Common early in 1862 (it opened on June 18). According to a young soldier named Edwin Spangler, “Extensive frame buildings were first erected as a barracks for the 6th New York (Ira Harris) Cavalry in December, 1861, who were quartered there during the winter. After their departure for the front, at the instance of Rev. George M. Slaysman and upon the recommendation of Captain Putnam, U. S. A., the barracks greatly enlarged and improved, was prepared for the accommodation of the thousands of sick and wounded soldiers who were ministered to during the remainder of the war.”

According to Dennis Brandt, Slaysman enlisted on February 11, 1863. Two days later he mustered into Federal service and was assigned to the 130th Pennsylvania as the unit’s second chaplain. He saw little service because, on April 6, 1863, he requested a leave of absence “hoping that a few days change of water, diet, etc. may suffice to restore me to my wanted health.” He had dysentery, and the condition remained with him forever.  There is no evidence that he ever returned to active duty after his furlough.

At the time, chaplains in the Union army held the rank of private (later in the war they would be recognized with the rank and pay of a captain). Some accounts suggest there were as many as 3,000 chaplains in field service during the war, variously appointed by the state governors or federal officials from the two opposing War Departments. Protestant, Catholic, and Jewish clergymen help minister to the needs of their particular flocks, and at times served as hospital stewards following a battle. General orders were that the armies were to release immediately any chaplains seized as prisoners of war, although there are known examples where the clergy wound up in prison camps.

The Rev. George M. Slaysman returned to civilian ministry and pastored a number of churches in south-central Pennsylvania, beginning with the Gibeon and Jackson Church. He returned to York in 1865 and stayed four more years, making 17 years in York County, having in part supported himself by dentistry, book-selling, and music teaching. In 1868 he published a book entitled, Independent or Democratic Church Government, and he was also very active in York County’s temperance movement. Slaysman was at the early organizational meetings which led to the creation of the Historical Society of York County, Pennsylvania.

In 1870 he became the pastor in Pottstown. During his two-year ministry there, he baptized 128 converts.

Late in his life, the effects of his military chaplain service and exposure to the elements during the Civil War caught up with Slaysman. Congressman Levi Maish, his former commander in the 130th Pennsylvania, petitioned Congress that Slaysman’s name be placed on the pension rolls; the matter was passed to the Committee on Invalid Pensions.

G. M. Slaysman died in 1904. His widow Mary lived until 1949 when she died at the age of 80 in Mount Union. She was buried beside her husband in Shirleysburg.