Major General John Sedgwick was one of the highest-ranking officers in the Union Army to lose his life during the Civil War. He commanded the Sixth Corps of the Army of the Potomac for much of the war until perishing at the Battle of Spotsylvania Court House on May 9, 1864, when a Confederate sharpshooter shot him in the head from across the lines.
Sedgwick, when warned of the danger only moments before and observing his men ducking when they heard rifle fire, reportedly sneered, “What? Men dodging this way for single bullets? What will you do when they open fire along the whole line? I am ashamed of you. They couldn’t hit an elephant at this distance.”

After the war, several posts of the Grand Army of the Republic, the leading veterans’ organization for ex-Union soldiers, were named in memory of General Sedgwick. They included Post #4 in Keene, New Hampshire; Post #12 in Milwaukee, Wisconsin; Post #17 in Santa Ana, California; and Post #37 in York, Pennsylvania.

A number of York’s leading citizens who were veterans, including wealthy industrialist S. Morgan Smith, actively participated in the John Sedgwick camp. 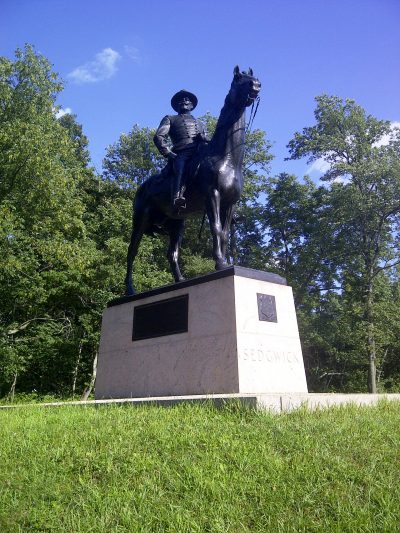 The John Sedgwick statue at Gettysburg National Military Park has long been a favorite of the oldest of my four grandsons and is a frequent resting place on hikes in the summer where we can watch the riders on the nearby park bridle trail.

John Sedgwick was born in Cornwall, Connecticut, on September 13, 1813. His great-uncle had been a general under George Washington in the American Revolution. As a young man, Sedgwick taught school and then attended the U.S. Military Academy, graduating in the Class of 1837. He served in the Mexican War, Utah War, Plains Indians War, and other conflicts before becoming a brigadier general in the first year of the Civil War. He commanded a division in the Peninsula Campaign in the summer of 1862 and was wounded three times at Antietam.
After recovering he commanded a corps at Chancellorsville and Gettysburg, where his powerful Sixth Corps formed the army reserve in the center of the line. The statue at Gettysburg is along Sedgwick Avenue north of Little Round Top and the Wheatfield Road.
His death at Spotsylvania from a shot estimated at 1,000 yards away cast a pall on his officers and men. His replacement, Horatio Wright, proved to be a capable officer but Sedgwick’s memory carried over well after the war. Hence the reason for so many CAR posts being named in his honor.

In 1989 Alfreda Patton Davidson of the South Central Pennsylvania Genealogical Society published a small 95-page booklet entitled The GAR: Its Organization and the Men of Post #37 which includes membership rolls and registers, meeting minutes, and illustrations. For part of the Civil War, the members of the York Rifle Company served under Sedgwick’s command; hence part of the rationale for naming the postbellum organization for the fallen general.

Prominent York County businessman and former Union officer William H. Lanius helped organize the GAR post in York in 1867 and was its first commander. Lanius’s family had suffered financial loss during the Gettysburg Campaign when their extensive lumberyard in Wrightsville was destroyed by an accidental fire started by flaming embers from the nearby Columbia Bridge (burned by retreating Union militia to prevent the Rebels from entering Lancaster County). Lanius represented Post #37 at several state and national encampments of the Grand Army of the Republic leadership.

Congress authorized a medal that could be worn by GAR members. Many examples exist and can be found frequently at Civil War relics shows, as well as regional ribbons, encampment proceedings, GAR hats, and apparel, etc. Harder to find are specific items related to the General John Sedgwick Post #37 at York, Pa.

Here is a snippet from George Prowell’s History of York County, Pennsylvania (1907).
“All honorably discharged soldiers and sailors, who have served in the army or navy of the United States are entitled to membership in the Grand Army of the Republic. Soon after the close of the Revolution, societies were formed which were composed of commissioned officers and their descendants.The most prominent of these was the Society of Cincinnati, which still has an existence. Army organizations of the War of 1812 and of the Mexican War have existed for social and convivial purposes, but none of these societies named have been based on the principle of mutual aid in time of need, or comprehended purposes so exalted as those embraced in the declaration of the Grand Army of the Republic, namely, ” Fraternity, Charity, Loyalty.” This society, whose purpose is to band together the men who wore the blue during the war, was originated in the west. To Colonel B. F. Stevenson, of Springfield, Illinois, is given the credit of being the first person who formulated the plans of its noble aims. The first post was organized at Dakota, Illinois, in1866. A State Department Encampment was organized in Illinois July 12 ,1866, under Colonel Stevenson. In the month of November of the same year a National Encampment was organized at Indianapolis, with representatives present from nearly all of the northern states. These encampments have since been held annually in various localities of the Union.

The Post held its first meeting on the third floor of the Jordan building, Centre Square. Captain William H. Lanius, through whose efforts the Post was successfully organized, was chosen its first commander.